"Chogha Zanbil (Persian: چغازنبيل‎); Elamite: Dur Untash) is an ancient Elamite complex in the Khuzestan province of Iran. Chogha in Bakhtiari means hill. It is one of the few existent ziggurats outside of Mesopotamia….Choga Zambil means 'basket mound.' It was built about 1250 BC by the king Untash-Napirisha, mainly to honor the great god Inshushinak. Its original name was Dur Untash, which means 'town of Untash', but it is unlikely that many people, besides priests and servants, ever lived there. The complex is protected by three concentric walls which define the main areas of the 'town'. The inner area is wholly taken up with a great ziggurat dedicated to the main god, which was built over an earlier square temple with storage rooms also built by Untash-Napirisha. The middle area holds eleven temples for lesser gods. It is believed that twenty-two temples were originally planned, but the king died before they could be finished, and his successors discontinued the building work. In the outer area are royal palaces, a funerary palace containing five subterranean royal tombs"….http://en.wikipedia.org/wiki/Chogha_Zanbil

The ziggurat of Chogha Zanbil in Khuzestan Province, near Susa. Ziggurats were pyramidal structures built in receding tiers with sun-baked brick cores and multi-coloured glazed-brick exteriors.) It was built on a plateau above the banks of the Dez River. ….the largest of all the ziggurats) and dates to circa 1250 BCE. It is surrounded by 3 huge concentric walls. The outer city wall was about 4 kilometres long and enclosed an area of approximately 100 hectares. The first (outer) wall has 7 gates. Between the inner and middle walls, several temples dedicated to different Elamite divinities were built. Thousands of baked mud bricks bearing inscriptions with Elamite cuneiform characters, all inscribed by hand, adorn the most important buildings. Chogha Zanbil is the best preserved of all the ancient ziggurats.

At the time of its construction this part of present-day Iran was part of ancient empire of Elam. Within an ethnological and cultural context the ancient Elamites were close to the Mesopotamian civilisations. However, it is not unusual to come across the claim that the written history of Iran began circa 3200 BCE with the Proto-Elamite civilization and was followed by the Elamite civilization. The ziggurat at Chogha Zanbil was part of an ancient Elamite complex built by the Elamite King Untaš-Napiriša (1275-1240 BCE) near the Elamite capital city of of Susa. 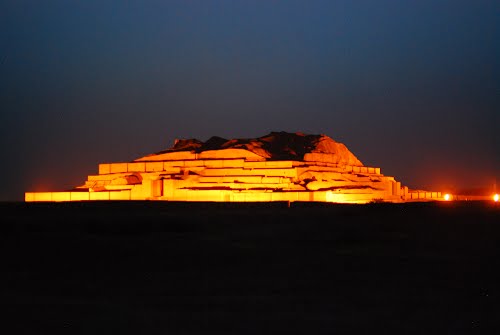 The ziggurat is a square structure with its base measuring 105 metres x 105 metres. It had 5 levels and it's height is variously estimated but believed by some to have been 52 metres. The ziggurat was a temple dedicated to Inshushinak, the bull-god of near-by Susa. It has been speculated that it may also have served an astronomical purpose. This four-sided, broadly stepped ziggurat is aligned so that its corners face the cardinal directions. Ziggurats originally had a cosmic significance. They were an image of the 7 spheres of the world and were also the seat of the Sun-god. The building complex at the site of the ziggurat includes 11 temples, a palace, and burial chambers…… It is believed that 22 temples were originally planned, but King Untaš-Napiriša died before the construction of the complex could be finished….Some schol….which would unite the gods/goddesses of both highland and lowland Elam at one site.

The first enclosure contains the temenos…..The ziggurat was built within a sacred precinct, which was, again, surrounded by a wall ("the outer temenos wall"), almost rectangular in shape of 400 x 500 meter, its corners facing the north, east, south, and west. The eastern corner was occupied by several minor sanctuaries….In the center of this rectangular zone was a second wall ("the inner temenos wall") of irregular shape…..

"The building materials in Chogha Zanbil are mainly mud bricks and occasionally baked bricks. The monuments were well built and beautifully decorated with glazed baked bricks, gypsum, ornaments of faience and glass. Thousands of baked bricks bearing inscriptions with Elamite cuneiform characters were all inscribed by hand, ornamenting the most important buildings. Glazed terracotta statues such as bulls and winged griffins guarded the entrances to the ziggurat. Near the temples of Kiririsha and Hishmitik-Ruhuratir, kilns were found that probably were used for the production of baked bricks and decoration materials…. 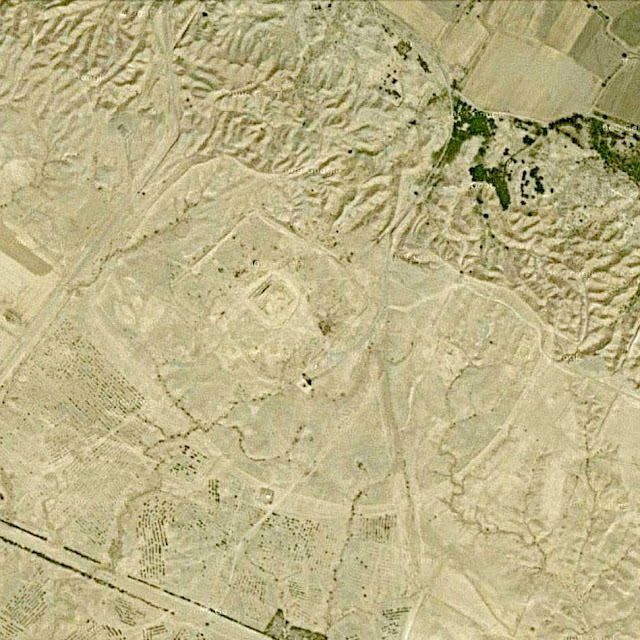 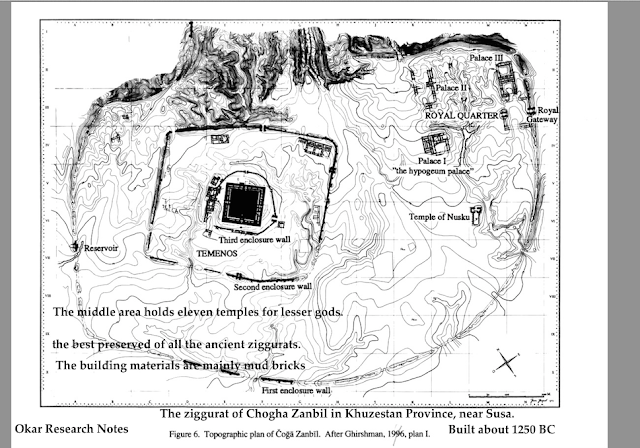 "Faint traces of blue terracotta glazing show that once upon a time this grand ziggurat was completely blue, not unlike the mesopotamian structures..... Sun-baked bricks made up the core of the ziggurat with facings of fired bricks on the outside. The facings were often glazed in different colors and may have had astrological significance. Kings sometimes had their names engraved on these glazed bricks. The number of tiers ranged from two to seven. It is assumed that they had shrines at the top, but there is no archaeological evidence for this and the only textual evidence is from Herodotus.[3] Access to the shrine would have been by a series of ramps on one side of the ziggurat or by a spiral ramp from base to summit. The Mesopotamian ziggurats were not places for public worship or ceremonies. They were believed to be dwelling places for the gods and each city had its own patron god. Only priests were permitted on the ziggurat or in the rooms at its base, and it was their responsibility to care for the gods and attend to their needs. The priests were very powerful members of Sumerian society.....http://www.flickr.com/photos/youngrobv/2511614456/

"Ziggurats in the ancient world were the centerpiece in any city where they were built, and they were more than a place of worship to the ancient Mesopotamians, they were the dwelling places of the gods. Babylon for example had a Ziggurat in the heart of their city. The Ziggurat was a temple on a man-made mountain where they would perform religious ceremonies exalting the god of that city..... Ziggurat's usually contained seven stories, the bottom story would be the largest, the next story would be slightly smaller, and the next would be slightly smaller, and that is why it looked like a stepped pyramid. The Temple of Ishtar built by in ancient Nimrud by King Nebuchadnezzar II of Babylon was actually built over the ruins of an earlier Ziggurat believed by some to have been the Tower of Babel.....The Ziggurat was a word which means "mountain top" and in the ancient world it was a pyramid which was constructed in stages, with a Temple at the top. It was believed that the gods dwelt at the top and they called this "The Mountain Of The World." The Gods dwelt at the peak of the mountain top and strangely enough the colors of each stage of the Ziggurat were the seven different colors of the rainbow......They were representative of man-made mountains that were created for the gods that they worshiped on the high mountain peaks. The Ziggurat at Ur is an example of when men came down to worship on the flat plains of the Tigris Euphrates Valley."....http://www.bible-history.com/biblestudy/ziggurats.html