""Shahāb ad-Dīn" Yahya ibn Habash as-Suhrawardī (Persian: شهاب‌الدین سهروردی‎, also known as Sohrevardi) was an Iranian/Persian philosopher, a Sufi and founder of the Illuminationist philosophy, an important school in Islamic mysticism that drew upon Zoroastrian and Platonic ideas. The "Orient" of his "Oriental Theosophy" symbolises spiritual light and knowledge. He is sometimes given the honorific title Shaikh al-Ishraq or "Master of Illumination" and sometimes is called Shaikh al-Maqtul, the "Murdered Sheikh", referring to his execution for heresy. Mulla Sadra, the Persian sage of the Safavid era has termed Suhrawardi as "the Reviver of the Traces of the Pahlavi (Iranian) Sages" and Suhrawardi, in his Magnum opus titled "Oriental Theosophy" thought of himself as a reviver or resusicator of ancient Persian wisdom tradition.".....http://en.wikipedia.org/wiki/Shahab_al-Din_Suhrawardi 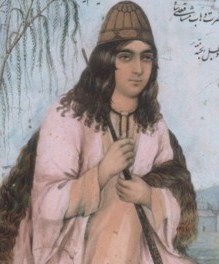 "According to Henry Corbin, Suhrawardi "came later to be called the Master of Oriental Theosophy (Shaikh-i-Ishraq) because his great aim was the renaissance of ancient Iranian wisdom" which Corbin specifies in various ways as the "project of reviving the philosophy of ancient Persia". In 1186, at the age of thirty-two, he completed his magnum opus “The Philosophy of Illumination.”.....he was executed sometime between 1191 and 1208 in Aleppo on charges of cultivating Batini teachings and philosophy, by the order of al-Malik al-Zahir, son of Saladin.".....http://en.wikipedia.org/wiki/Henry_Corbin

"Suhrawardi taught a complex and profound emanationist cosmology, in which all creation is a successive outflow from the original Supreme Light of Lights (Nur al-Anwar). The fundamental of his philosophy is pure immaterial light, than which nothing is more manifest, that unfolds from the light of lights in a descending order of ever-diminishing intensity and, through complex interaction, gives rise to a "horizontal" array of lights, similar in conception to Platonic forms, that governs the species of mundane reality. In other words, the universe and all levels of existence are but varying degrees of Light - the light and the darkness. In his division of bodies, he categorizes objects in terms of their reception or non-reception of light.... the Supreme Light, which is the only absolute Reality....Suhrawardi elaborated the neo-Platonic idea of an independent intermediary world, the imaginal world ( 'alam-i mithal عالم مثال). His views have exerted a powerful influence down to this day, particularly through Mulla Sadra’s combined peripatetic and illuminationist description of reality.."....http://en.wikipedia.org/wiki/Shahab_al-Din_Suhrawardi

The Great Invocation to Hûrakhsh (The Sun) of Suhrawardî....Suhrawardî's "Book of Hours" has two invocations to Hûrakhsh: Hûrakhsh al-kabîr and Hûrakhsh al-saghîr....Hûrakhsh = Sol Splendidus, Resplendent Sun, i.e. the Sun in its active Archangelic theophanic modality, which the Avesta hails "as the most beautiful manifestation of Ohrmazd," the Godhead. Suhrawardî designates Hûrakhsh as the theurgy of the Archangel Shahrîvar (in the Avesta one of the Amahraspands known as Xshathra Vairya, "Desirable Reign,"precisely identified as "having the appearance of the Sun...")......Text from Henri Corbin, En islam iraniene, vol. II, Galimard: 1974.

"Suhrawardi, in his Magnum opus titled "Oriental Theosophy" thought of himself as a reviver or resusicator of ancient Persian wisdom tradition.....He states in Hikmat al-'Ishraq that: 'There was among the ancient Persians a community of Sage-Philosophers, with no resembelence to the Magi (Dualists).... It is their precious philosophy of Light, the same as that to which the mystical experience of Plato and his predecessors bear witness.'....Suhrawardi uses pre-Islamic Iranian gnosis, synthesising it with Greek and Islamic wisdom. The main influence from pre-Islamic Iranian thought on Suhrawardi is in the realm of angelology and cosmology. He believed that the ancient Persians' wisdom was shared by Greek philosophers such as Plato as well as by the Egyptian Hermes and considered his philosophy of illumination a rediscovery of this ancient wisdom. According to Nasr, Suhrawardi provides an important link between the thought of pre-Islamic and post-Islamic Iran and a harmonious synthesis between the two. And Henry Corbin states: "In northwestern Iran, Sohravardi (d. 1191) carried out the great project of reviving the wisdom or theosophy of ancient pre-Islamic Zoroastrian Iran.".....Henry Corbin. The Man of Light in Iranian Sufism. Omega Publications, New York. 1994

"In his work Alwah Imadi, Suhrawardi offers an esoteric intrepretation of Ferdowsi's Epic of Kings (Shah Nama) in which figures such as Fereydun, Zahak, Kay Khusraw and Jamshid are seen as manifestations of the divine light.".... Amin Razavi, M. (1997) Suhrawardi and the School of Illumination, Richmond: Curzon Press.

"In this Persian work Partwa Nama and his main Arabic work Hikmat al-Ishraq, Suhrawardi makes extensive use of Zoroastrian symbolism and his elaborate anegeology is also based on Zoroastrian models. The supreme light he calls both by its Quranic and Mazdean names, al-nur al-a'zam (the Supreme Light) and Vohuman (Bahman). Suhrawardi refers to the hukamayya-fars (Persian Philosophers) as major practitioners of his Ishraqi wisdom and considers Zoroaster, Jamasp, Goshtasp, Kay Khusraw, Frashostar and Bozorgmehr as possessors of this ancient wisdom."....Amin Razavi, M. (1997) Suhrawardi and the School of Illumination

"Among pre-Islamic Iranian symbols and concepts used by Suhrawardi are: minu (incorporeal world), Giti (Corporeal World), Surush (messenger, Gabriel), Farvardin (the lower world), Gawhar (Pure sessense), Bahram, Hurakhsh (the Sun), Shahriyar (archetype of species), Isfahbad (Light in the body), Amordad (Zoroastrian Angel), Shahrivar (Zoroastrian Angel), and the Kiyyani Khvarenah.....With regards to the pre-Islamic Iranian concept of Khvarenah, Suhrawardi mentions: Whoever knows Hikmat (Wisdom), and preserves in thanking and sanctifying the Light of the Lights, will be endowed with royal Kharreh and with luminous Farreh, and -- as we have said elsewhere -- divine light will further bestow upon him the cloak of royal power and value. Such a person shall then became the natural Ruler of the Universe. He shall be given aid from the High Heavens, and whatever he commands shall be obeyed; and his dreams and inspirations will reach their uppermost, perfect pinnacle.".......Hossein Ziai, "The book of radiance", Mazda Publisher, 1998. pg 84-85. Note the author has translated the word Hikmat (Wisdom) as Philosophy here but Hikmat usually means Wisdom.

"Suhrawardi was influenced by Avicennism.....Avicenna (980 –1037), created an extensive corpus of works during what is commonly known as Islam's Golden Age, in which the translations of Greco-Roman, Persian, and Indian texts were studied extensively. Greco-Roman (Mid- and Neo-Platonic, and Aristotelian) texts by the Kindi school were commented, redacted and developed substantially by Islamic intellectuals, who also built upon Persian and Indian mathematical systems, astronomy, algebra, trigonometry and medicine. The Samanid dynasty in the eastern part of Persia, Greater Khorasan and Central Asia as well as the Buyid dynasty in the western part of Persia and Iraq provided a thriving atmosphere for scholarly and cultural development. Under the Samanids, Bukhara rivaled Baghdad as a cultural capital of the Islamic world".....http://en.wikipedia.org/wiki/Avicennism