"Although it is generally accepted that Tantric Buddhism first developed in the country of Uddiyana or Odra Desha under King Indrabhuti, there is an old and well known scholarly dispute as to whether Uddiyana or Odra was in the Swat valley, Odisha or some other place."...http://en.wikipedia.org/wiki/History_of_Sambalpur

"Indrabhuti had a young sister named Lakshminkara of whom king Jalendra wanted his son to marry. Although the countries had religious differences, Indrabhuti agreed that when Lakshminkara was of age, she would move to Lankapuri to marry the prince."....http://www.himalayanart.org/search/set.cfm?setID=577

"The matter of the conflation of Indrabhuti and at least one evocation of the historicity of a particular personage by that name is intimately connected with the location of 'Oddiyana'...in Tibetan: (1) O-rgyān, U-rgyān, O-ḍi-yā-na, and (2) O-ḍi-vi-śā, with the first series connected with Indrabhūti, i.e., Oḍiyăna and Uḍḍiyāna....In the Sādhanamālā, he further points out, Uḍḍiyāna is also spelt as Oḍrayāna while in the Kālikā Purāṇa, as indicated earlier, it is spelt either Uḍḍiyāna or Oḍra. ...."...http://en.wikipedia.org/wiki/Indrabhuti

"According to Nyingma tradition, King Ja (also known as Indrabhuti) taught himself intuitively from "the Book" of the Tantric Way of Secret Mantra (that is Mantrayana) that magically fell from the sky along with other sacred objects and relics "upon the roof of King Ja" according to Dudjom (1904–1987), et al. (1991: p. 613 History) this happened on the Tibetan calendar year of the Earth Monkey, which Dudjom et al. identify as 853 BC."....http://en.wikipedia.org/wiki/Indrabhuti 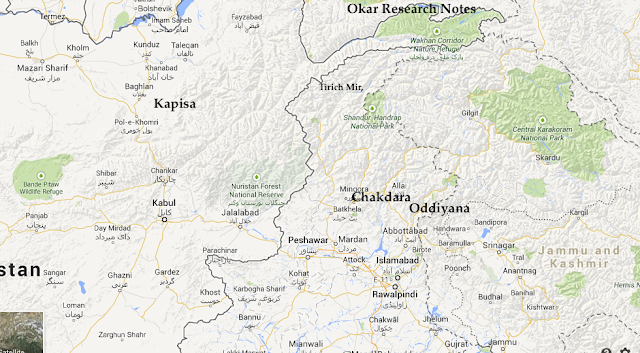 "Indrabhuti, the oldest known king of Sambalpur founded Vajrayana while his sister who was married to Yuvaraja Jalendra of Lankapuri (Suvarnapur) founded Sahajayana. These new Tantric cults of Buddhism introduced Mantra, Mudra and Mandala along with six Tantric Abhicharas (practices) such as Marana, Stambhana, Sammohana, Vidvesan, Uchchatana and Vajikarana. The Tantric Buddhist sects made efforts to raise the dignity of the lowest of the low of the society to a higher plane. It revived primitive beliefs and practices a simpler and less formal approach to the personal god, a liberal and respectful attitude towards women and denial of caste system.".....http://en.wikipedia.org/wiki/History_of_Sambalpur

"Tantric Buddhism first developed in Uddiyana, a country which was divided into two kingdoms Sambhala and Lankapuri. Sambhala has been identified with Sambalpur and Lankapuri with Subarnapura (Sonepur)."....http://en.wikipedia.org/wiki/History_of_Sambalpur

"Kalachakra tantra was first taught by the Buddha to King Indrabhuti, the first dharmaraja of Shambhala.......'Lord Kalki will appear in the home of the most eminent brahmin of Shambhala village, the great souls Vishnuyasha and Sumati." (Srimad-Bhagavatam Bhag.12.2.18)....http://en.wikipedia.org/wiki/History_of_Sambalpur

Masters of Mahamudra: Songs and Histories of the Eighty-Four Buddhist Siddhas By Abhayadatta