Mount Mashu...... To the Sumerians, Mashu was a sacred mountain. Its name means "twin" in Akkadian, and thus was it portrayed on Babylonian cylinder seals—a twin-peaked mountain, described by poets as both the seat of the gods, and the underworld. References or allusions to Mt.Mashu are found in three episodes of the Gilgamesh cycle which date between the third and second millennia B.C.

Mount Mashu .....Mesopotamian....Twin peaks where the sun would rise.

"The Scorpion-Beings The mountain is called Mashu. Then he reached Mount Mashu, which daily guards the rising and setting of the Sun, above which only the dome of the heavens reaches, and whose flank reaches as far as the Netherworld below, there were Scorpion-beings watching over its gate. Trembling terror they inspire, the sight of them is death, their frightening aura sweeps over the mountains. At the rising and setting they watch over the Sun. When Gilgamesh saw them, trembling terror blanketed his face, but he pulled himself together and drew near to them. The scorpion-being called out to his female: "He who comes to us, his body is the flesh of gods!" The scorpion-being, his female, answered him: "(Only) two-thirds of him is a god, one-third is human." The male scorpion-being called out, saying to the offspring of the gods: "Why have you traveled so distant a journey? Why have you come here to me, over rivers whose crossing is treacherous! I want to learn your ... Twelve leagues he traveled and it grew brilliant. ...it bears lapis lazuli as foliage, bearing fruit, a delight to look upon. "....http://www.ancienttexts.org/library/mesopotamian/gilgamesh/tab9.htm

Scorpion Seal from Babylon and A Scorpion Harp from UR ( an important Sumerian city-state in ancient Mesopotamia....The city dates from the Ubaid period circa 3800 BC, and is recorded in written history as a City State from the 26th century BC, its first recorded king being Mesh-Ane-pada.)

"The Garden of the gods or Sumerian paradise is the divine paradise of the Annanuki, the gods of Sumer. Samuel Noah Kramer suggested the concept of a human paradise and the Garden of Eden originated from the Sumerians who were describing a land outside of Sumer..... In tablet nine of the standard version of the Epic of Gilgamesh, Gilgamesh travels to the garden of the gods through the Cedar Forest and the depths of Mashu, a comparable location in Sumerian version is the "Mountain of cedar-felling"....The name of the mountain is Mashu. As he arrives at the mountain of Mashu, Which every day keeps watch over the rising and setting of the sun, Whose peakes reach as high as the "banks of heaven," and whose breast reaches down to the netherworld, The scorpion-people keep watch at its gate......http://en.wikipedia.org/wiki/Garden_of_the_gods_(Sumerian_paradise) 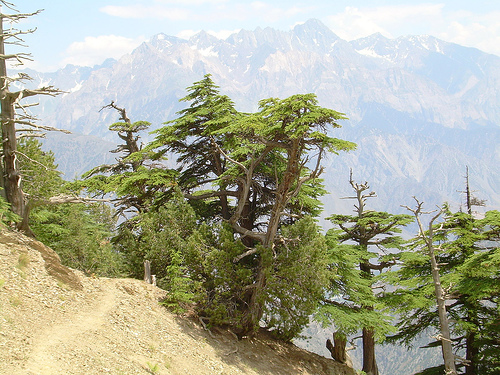 "Mashu, as described in the Epic of Gilgamesh of Mesopotamian mythology, is a great cedar mountain through which the hero-king Gilgamesh passes via a tunnel on his journey to Dilmun after leaving the Cedar Forest, a forest of ten thousand leagues span....

"Scorpion Men are featured in several Akkadian language myths, including the Enûma Elish and the Babylonian version of the Epic of Gilgamesh. They were also known as aqrabuamelu or girtablilu. The Scorpion Men are described to have the head, torso, and arms of a man and the body of a scorpion....In the Epic of Gilgamesh, they stand guard outside the gates of the sun god Shamash at the mountains of Mashu. ...The scorpion is likewise a magical guard to an entrance among, e.g., the Mekeo of Papua -- "a scorpion charm is used to protect ... your house."..http://en.wikipedia.org/wiki/Scorpion_man

"Shamash (Akkadian: Šamaš, "Sun") was a native Mesopotamian deity and the Sun god in the Akkadian, Assyrian and Babylonian pantheons. Shamash was the god of justice in Babylonia and Assyria, corresponding to Sumerian Utu. Akkadian šamaš is cognate to Syriac šemša or šimšu Hebrew שֶׁמֶשׁ šemeš and Arabic شمس šams." 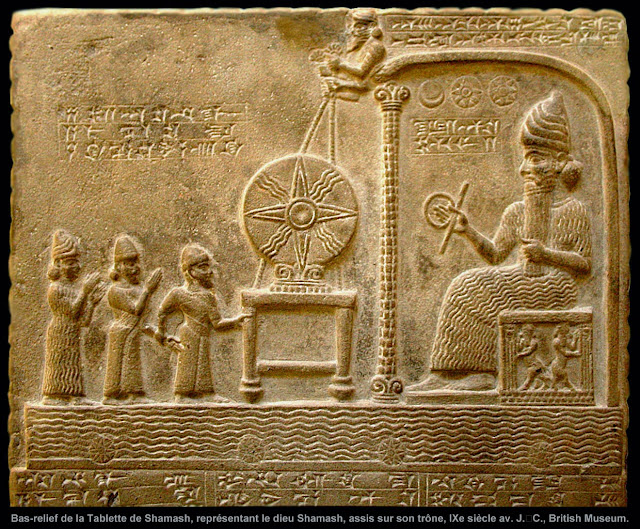 The Tablet of Shamash is a stone tablet recovered from the ancient Babylonian city of Sippar in southern Iraq in 1881; it is now a major piece in the British Museum's ancient Middle East collection. It is dated to the reign of King Nabu-apla-iddina ca. 888 – 855 BC.

"In the Epic of Gilgamesh, they stand guard outside the gates of the sun god Shamash at the mountains of Mashu. These give entrance to Kurnugi, the land of darkness. The scorpion men open the doors for Shamash as he travels out each day, and close the doors after him when he returns to the underworld at night. They also warn travellers of the danger that lies beyond their post. Their heads touch the sky, their "terror is awesome" and their "glance is death". This meeting of Gilgameš, on his way to Ūta-napišti, with the Scorpion-folk guarding the entrance to the tunnel is described in Iškār Gilgāmeš, tablet IX, lines 47-81.".....A. R. George : The Babylonian Gilgamesh Epic. Oxford University Press, 2003. p. 493