Kalachakra, Shakyamuni & the 9th Century BC

"The Kalachakra tantra puts the life of Shakyamuni Buddha in the 9th. Century BC, instead of the more commonly accepted 6th. Century BCE. There is also some discussion on when Shakyamuni Buddha taught the Kalachakra during his life time. Because of specific time indications in the teachings, it could have been one year after he attained enlightenment, but others say it was one year before he passed away. According to His Holiness the 14th Dalai Lama, logic indicates that it must have been at the end of his life, because the Kalachakra tantra reflects so many of his lifelong accomplishments."......http://kalachakranet.org/kalachakra_tantra_history.html

"The primary sources for the life of Siddhārtha Gautama are a variety of different, and sometimes conflicting, traditional biographies. These include the Buddhacarita, Lalitavistara Sūtra, Mahāvastu, and the Nidānakathā. Of these, the Buddhacarita is the earliest full biography, an epic poem written by the poet Aśvaghoṣa, and dating around the beginning of the 2nd century AD......(600 years after the parinirvana)."

"King Suchandra came from Shambhala (some say north of Kashmir) to request and receive the Kalachakra teachings from Shakyamuni Buddha. After the teachings, he wrote them down and composed the 'Mula' or 'Root Text' of the Kalachakra tantra, comprising 12,000 verses. However, this text has never reached us. On the request of Shakyamuni Buddha, he built a huge 3-dimensional Kalachakra mandala in the centre of the kingdom. Suchandra (see image on the right) was the first of a line of seven religious kings who taught the Kalachakra to the inhabitants of Shambhala. 2 Years after receiving the Kalachakra teachings he died and was followed by 6 Kings, each reigning 100 years over Shambala. These first 7 kings are called the 7 Dharma-Kings.".....http://kalachakranet.org/kalachakra_tantra_history.html

"The Kalachakra system is clearly related to the ancient Vedic tradition in India which existed long before Buddhism appeared. The Kalachakra refers to many different traditions, for example the Hindu; Saivite, Samkya, Vaishnava, the Vedas, Upanisads and Puranas traditions, but also Jainism. For example, the Kalachakra mandala includes deities which are equally accepted by Hindus, Jainas and Buddhists.".....http://kalachakranet.org/kalachakra_tantra_history.html

"As for the texts you mentioned, my knowledge of the "small vehicle", or more appropriately, the Pali Canon, is limited. However from my understanding, the Kalachakra tantra originated in the 9th century AD monasteries of Northern-central Afghanistan. Without getting too far into esoteric practices like tantra, these texts were largely received in the centuries after the Buddha lived as transmissions that were received in visions."......http://www.examiner.com/article/a-buddhist-perspective-on-the-apocalypse

"....for the tantras the body consists of a network of numerous larger or smaller channels through which the life energies flow. These are also known as “veins” or “rivers” (nadi, rtsa). This dynamic body structure is no discovery of Vajrayana, rather it was adopted from pre-Buddhist times. For example, we can already find it in the Upanishads (ninth century B.C.E.).".....http://www.trimondi.de/SDLE/Part-1-07.htm

"The five century time span of roughly 800 to 300 BC effects the transition from Vedic to classical culture in Indian society. The early stages of this time span fit such tags as “later Vedic” or “post Vedic”, and the latter centuries qualify as “pre classical” or “early classical”. Although there is not full agreement about the exact dates of the composition of the Upanishads, most scholars believe they were composed during the “later Vedic” period, between 800 and 500 BCE."........http://www.ancient.eu.com/Upanishads/

"Cyrus II of Persia (Old Persian: Kūruš; New Persian: کوروش بزرگ c. 600 BC or 576 BC–530 BC), commonly known as Cyrus the Great, also known as Cyrus the Elder, was the founder of the Achaemenid Empire."..... http://en.wikipedia.org/wiki/Cyrus_the_Great 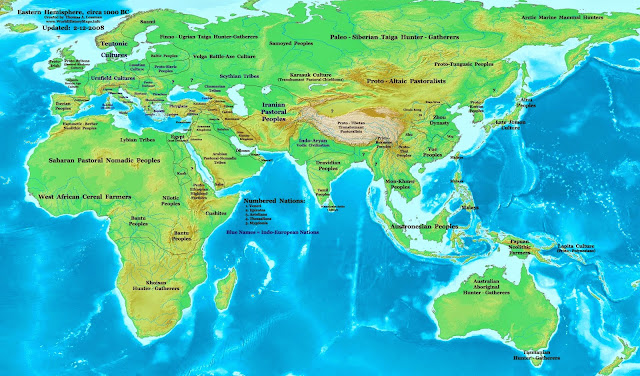 "The texts of the Avesta — which are all in the Avestan language — were composed over the course of several hundred years.... The various Yashts are in Younger Avestan and thought to date to the Achaemenid era (559–330 BC).".....http://en.wikipedia.org/wiki/Avesta

"The Rigveda contains several mythological and poetical accounts of the origin of the world, hymns praising the gods, and ancient prayers for life, prosperity, etc........It is one of the oldest extant texts in any Indo-European language. Philological and linguistic evidence indicate that the Rigveda was composed in the north-western region of the Indian subcontinent, roughly between 1700–1100 BC (the early Vedic period). There are strong linguistic and cultural similarities with the early Iranian Avesta, deriving from the Proto-Indo-Iranian times, often associated with the early Andronovo and Sintashta-Petrovka cultures of c. 2200 – 1600 BC......The Rig Veda was written by the Aryans who entered the Indus Valey toward the end of the Harappan Civilization. They wrote this Veda between 1300 and 1000 BC, during the period of the Aryan Migrations." .....http://en.wikipedia.org/wiki/Rigveda 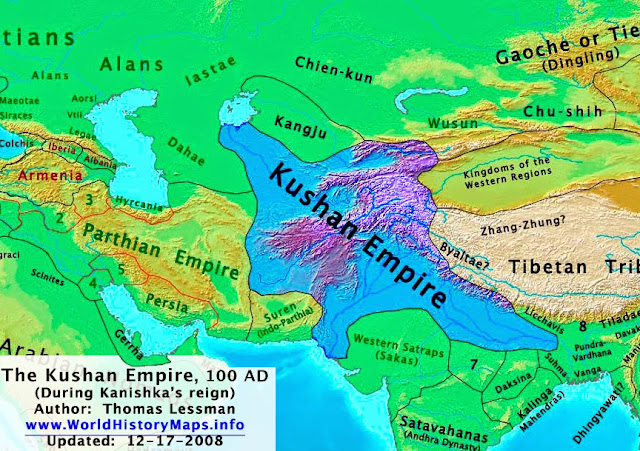 "In Buddhist tradition, Kassapa (Pāli) is the name of a Buddha, the third of the five Buddhas of the present kalpa (the Bhaddakappa or 'Fortunate Aeon'), and the sixth of the six Buddhas prior to the historical Buddha mentioned in the earlier parts of the Pali Canon (D.ii.7). In the Buddhist texts in Sanskrit, this Buddha is known as Kāśyapa.....Succeeded by: Gautama Buddha".....http://en.wikipedia.org/wiki/Kassapa_Buddha 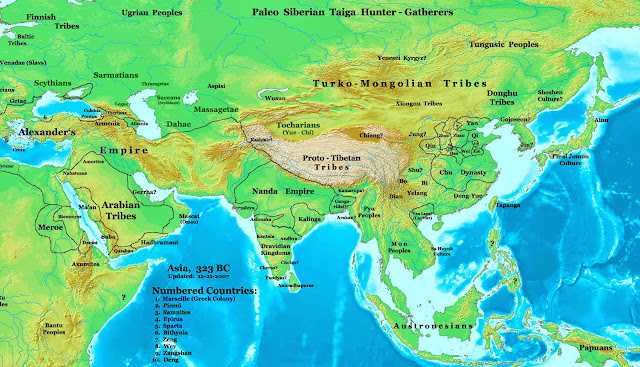 "The interaction between Hellenistic Greece and Buddhism started when Alexander the Great conquered Asia Minor and Central Asia in 334 BCE, going as far as the Indus, thus establishing direct contact with India, the birthplace of Buddhism.....Alexander founded several cities in his new territories in the areas of the Oxus and Bactria, and Greek settlements further extended to the Khyber Pass, Gandhara (see Taxila) and the Punjab. These regions correspond to a unique geographical passageway between the Himalayas and the Hindu Kush mountains, through which most of the interaction between India and Central Asia took place, generating intense cultural exchange and trade.....Following Alexander's death on June 10, 323 BCE, his Diadochi (generals) founded their own kingdoms in Asia Minor and Central Asia. General Seleucus set up the Seleucid Kingdom, which extended as far as India. Later, the Eastern part of the Seleucid Kingdom broke away to form the Greco-Bactrian Kingdom (3rd–2nd century BC), followed by the Indo-Greek Kingdom (2nd–1st century BC), and later still by the Kushan Empire (1st–3rd century CE). The interaction of Greek and Buddhist cultures operated over several centuries until it ended in the 5th century CE with the invasions of the White Huns, and later the expansion of Islam."....http://www.religionfacts.com/buddhism/history/hellenistic.htm

"The Kālachakra tradition, along with all Vajrayana Buddhism, vanished from India in the wake of the Muslim invasions, surviving only in Nepal.....The Dro lineage was established in Tibet by a Kashmiri disciple of Nalandapa named Pandita Somanatha, who traveled to Tibet in 1027 AD (or 1064CE, depending on the calendar used), and his translator Droton Sherab Drak Lotsawa, from which it takes its name. The Ra lineage was brought to Tibet by another Kashmiri disciple of Nadapada named Samantashri, and translated by Ra Choerab Lotsawa (or Ra Dorje Drakpa).".....http://en.wikipedia.org/wiki/Kalachakra

"The 60-year cycle Tibetan Calendar.... is known as the Bṛhaspati (or Vṛhaspati) cycle and was first introduced into Tibet by an Indian Buddhist by the name of Chandra Nath and Chilu Pandit of Tibet in 1025 CE. The first cycle is the rabqung (Tibetan: རབ་བྱུང༌།, Wylie: rab-byung) cycle. The first year of the first rabqung cycle started in 1027. This cycle was adopted from India."....http://en.wikipedia.org/wiki/Tibetan_calendar 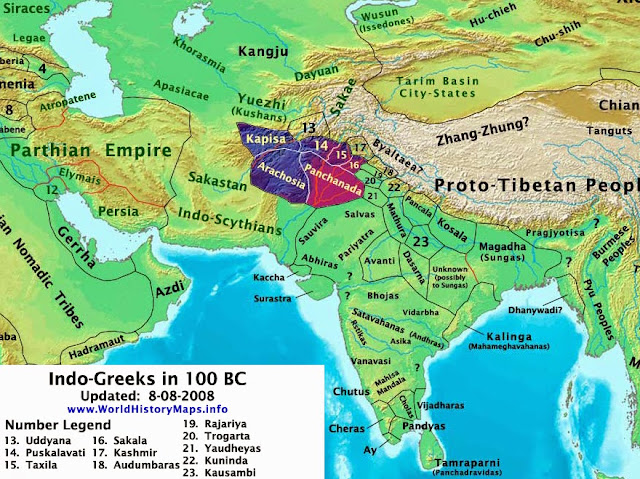