"The legendary, mythical 7-gated Sumerian city of Aratta, the original homeland of the Sumerians .... appears to refer to Bactria at the eastern end of the "Great Khorasan Road".... the source of valuable gems and minerals, in particular lapis lazuli.....'Civilization' may have traveled from East to West along the Sun’s path rather than blossoming first in the land of the Two Rivers of Genesis...."

"About four thousand years ago a collection of tribes known as the Aryans swept into South and West Asia - by a series of wave-like migration….First tribes were the Aryan tribe, which later were pushed down over the Paropamisus [mountains] into Punjab. The Iranians split into two sections, one section went West and founded settlements on the Tigris and Euphrates valley - which later became strong Kingdoms. Of this section, separated yet other tribes such as the Persians and the Medes. The Persians spread over the elevated lands of the Persian golf region. The Medes subdivided into smaller clans and occupied The land between the Caspian Sea to the land of Persis. The other section of the Iranians took the easterly direction. They also pushed the Aryans before them to the mountains and settled on the banks of the Oxus. They made Bactra {modern Balkh} their capital, and seized the ancient shine of Bactra. Forming an aristocracy over the local people they lived in isolation. They had a swift cavalry which suddenly attacked the enemy from the slopes and quickly retired to their strongholds…..The Aryans and the Iranians of Bactria, had a lot in common. They spoke the same language, worshiped the forces of nature, such as: Varuna, the shining Vault of Heaven; Mithra, the friendly light of the sun; Vayu; the wind that pushes aside the storms and clears the heaven…."….http://www.iranchamber.com/geography/articles/balkh.php

"An even more striking feature of the Jiroft is the existence of a writing system as far back as the third millennium BC, more precisely around 2800 BC, which is earlier than the oldest tablets left by Sumerian civilization. The implications of those finds, taken together with other discoveries about the Indus and Sarasvati river cultures, spread out as far North as the Kashmir valley and modern day Afghanistan, are that “Civilization” may have traveled from East to West along the Sun’s path rather than blossoming first in the land of the Two Rivers of Genesis….."…http://www.comecarpentier.com/pdf/iran.pdf

"Aratta is a land that appears in Sumerian myths surrounding Enmerkar and Lugalbanda, two early and possibly mythical kings of Uruk also mentioned on the Sumerian king list. A "possible reflex" has been suggested in Sanskrit Āraṭṭa or Arāṭṭa mentioned in the Mahabharata and other texts….http://en.wikipedia.org/wiki/Aratta 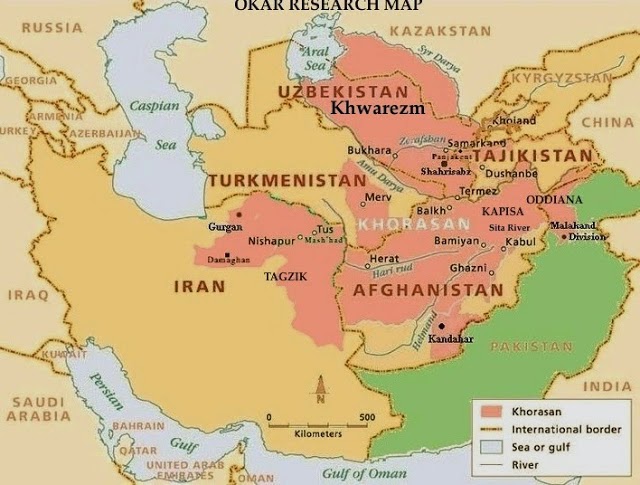 Aratta is described as follows in Sumerian literature:
It is a fabulously wealthy place full of gold, silver, lapis lazuli and other precious materials, as well as the artisans to craft them.
It is remote and difficult to reach.
It is home to the goddess Inana, who transfers her allegiance from Aratta to Uruk.
It is conquered by Enmerkar of Uruk.
…http://en.wikipedia.org/wiki/Aratta 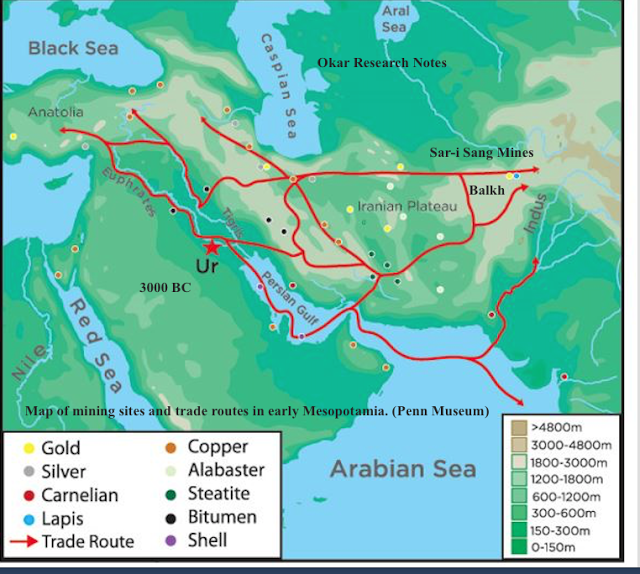 Lapis Lazuli....By the second half of the 4th millennium BCE, Badakshan lapis lazuli (stone of blue) was being traded in countries as far west as Sumer and Akkad (Mesopotamia), and the Nile Delta (Egypt) .... The 2500m / 9,000ft high Sar-e Sang, Badakshan mines, now in north-eastern Afghanistan, were the only known source of lapis lazuli in the ancient world. The British Museum site that describes the seal described below also states, "The Sar-i Sang mines in the region of Badakhshan in north-east Afghanistan were probably the source for all lapis lazuli used in the ancient Near East. From here it was carried across Iran, where several lapis working sites have been discovered, and on to Mesopotamia and Egypt."....http://www.heritageinstitute.com/zoroastrianism/aryans/trade.htm

"Sumerian literature…..Enmerkar and the Lord of Aratta - The goddess Inanna resides in Aratta, but Enmerkar of Uruk pleases her more than does the lord of Aratta, who is not named in this epic. Enmerkar wants Aratta to submit to Uruk, bring stones down from the mountain, craft gold, silver and lapis lazuli, and send them, along with "kugmea" ore to Uruk to build a temple. Inana bids him send a messenger to Aratta, who ascends and descends the "Zubi" mountains, and crosses Susa, Anshan, and "five, six, seven" mountains before approaching Aratta. Aratta in turn wants grain in exchange. However Inana transfers her allegiance to Uruk, and the grain gains the favor of Aratta's people for Uruk, so the lord of Aratta challenges Enmerkar to send a champion to fight his champion. Then the god Ishkur makes Aratta's crops grow."…..

"…Successive Persian dynasties which could generally not maintain their hold on Iraq tended to look to the province of Fars, the heartland of the first kingdoms of their forbears, as the centre of their world but they never seemed to be sure whether their remote ancestors had come from the Caucasus (Azerbaijan) or from the East of the Caspian Sea, beyond the Oxus and Iaxartes (Syr and Amu Darya). This ambiguity about the geographic cradle of the Iranian people and of the Zoroastrian religion has influenced national history….."…..http://www.comecarpentier.com/pdf/iran.pdf 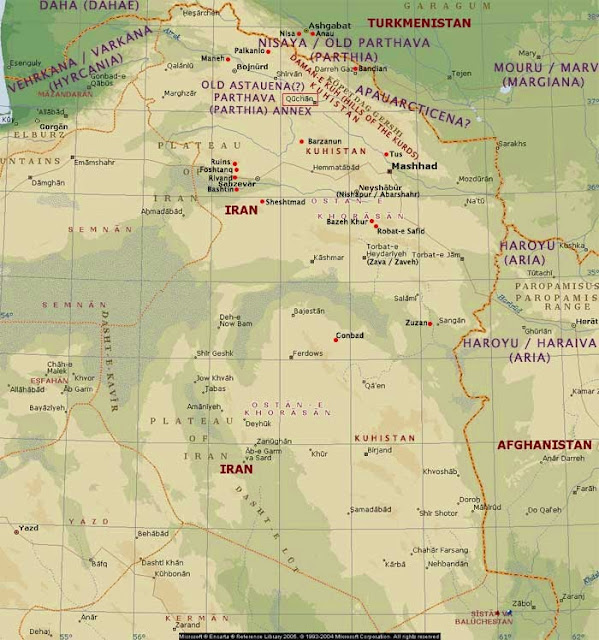 The name Khorasan is a compound word Khur+san meaning Sun+land. '-san' is an older form of '-shan' and '-stan'. Most authors take this to mean land of the rising sun ...http://www.heritageinstitute.com/zoroastrianism/khorasan/index.htm

Click on the map to enlarge.....Khorasan, also written as Khurasan (Middle Persian: Khwarāsān, Persian: خراسان بزرگ or خراسان کهن‎ .... is a historical region lying in the northeast of Persia. "In pre-Islamic and early Islamic times, the term "Khurassan" frequently had a much wider denotation, covering also parts of Central Asia and Afghanistan.

"Aratta was a city, city-state, or country with which Sumerians had close trade and religious ties in the third millennium B.C. Its location is not known......Aratta, apparently, was under the special protection of the Sun god's daughter, Inanna, the goddess of love and war. In "Enmerkar and the Lord of Aratta", the goddess and/or her statue were taken from Aratta to the Sumerian city of Uruk by the ruler of Uruk, Enmerkar. Now believing himself to have the goddess' protection, the Sumerian king challenged the lord of Aratta.....The four myths outlined above portray Aratta as a wealthy and militarily powerful state with which Sumer had relations from very early times. It was located some distance from Sumer and protected by its forbidding mountains, but it was not so distant as to prevent trade relations. Aratta had building materials, precious stones, metals and craftsmen skilled in their transformation. Aratta also had primacy with regard to the religion of the mother goddess, Inanna, who resided in Aratta, was the patron of that state, and was taken or lured south to Sumerian cities. Uruk and Aratta also were in contest for military superiority—each demanding the submission of the other. The method of transporting the "stones of the mountain" from Aratta to Uruk and of transporting grain from Uruk to Aratta seems consistent with such trade historically between the Armenian highlands and areas to its south, namely, by boat from Aratta south, and by pack animal from Uruk north. If Aratta is indeed located in eastern Asia Minor, the general implication of the Aratta cycle of myths is that Aratta played a seminal role in the development of religion in Sumer, as well as in the construction of its cult structures; and that trade and diplomacy between the two states was of such importance that writing was developed specifically for them.".....http://rbedrosian.com/Memyth.htm