"The ancient Sumerians, the ‘black-headed ones'......and are likely to have been responsible for the development of the first writing.....Their religion recognised many gods, whose feats and escapades were described in stories that were often preserved for generations....Book-keeping was a feature of Sumerian life, and very detailed records on clay tablets of offerings, rations, taxes and agricultural work have come down to us. Their favourite board game achieved popularity throughout the whole Middle Eastern world. Imported lapis lazuli and carnelian was much prized for inlays and jewellery......Archaeology has shown that in about 2500 BC the ruling elite in the city of Ur went to their final resting place surrounded by their wealth and the attendant bodies of their court personnel.....the land of Nimrod. This was the land that Gilgamesh sought when he obtained the Lapis lazuli tablets hidden in a Copper tablet box.... "

"Lapis lazuli was being mined in the Sar-i Sang mines and in other mines in the Badakhshan province in northeast Afghanistan as early as the 7th millennium BC, Lapis beads have been found at neolithic burials in Mehrgarh, the Caucasus, and even as far from Afghanistan as Mauritania. It was used for the eyebrows on the funeral mask of King Tutankhamun (1341–1323 BC)." 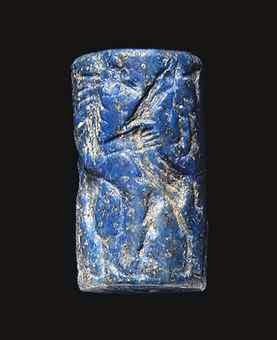 Sumerian wisdom literature.....the large group of tablets dated about 1750 B. C. a which are inscribed with the Sumerian literary compositions consisting of epics and myths, hymns and laments, proverbs and "wisdom."...Sumerian wisdom literature consists of a large number of brief, pithy, and pointed proverbs and aphorisms; of various fables, such as "The Bird and the Fish," "The Tree and the Reed," "The Pickax and the Plow," "Silver and Bronze"; and finally of a group of didactic compositions, long and short, several of which are devoted to a description of the process of learning the scribal art and of the advantages which flow from it......Should the ancient city of Eridu in southern Sumer, the cult center of Enki, the Sumerian god of wisdom, ever be thoroughly excavated, there is good reason to believe that our store of Sumerian literary compositions will be considerably enlarged.".....http://www.sacred-texts.com/ane/sum/sum05.htm 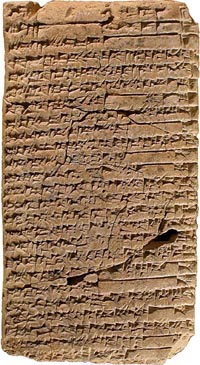 "Instructions of Shuruppak (or, Instructions of Šuruppak son of Ubara-tutu) is a significant piece of Sumerian wisdom literature. Wisdom literature, intended to teach proper piety, inculcate virtue, and preserve community standards, was common throughout the ancient Near East. The text is set in great antiquity by its incipit: "In those days, in those far remote times, in those nights, in those faraway nights, in those years, in those far remote years." The precepts are placed in the mouth of a king Šuruppak, son of Ubara-Tutu. Ubara-Tutu is recorded in most extant copies of the Sumerian king list as being the final king of Sumer prior to the deluge. Grouped with the other cuneiform tablets from Abu Salabikh, the Instructions date to the early third millennium BC, being among the oldest surviving literature."...http://en.wikipedia.org/wiki/Instructions_of_Shuruppak 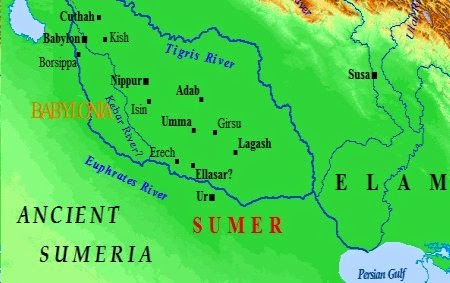 "The Abu Salabikh tablet, dated to the mid-third millennium BC, is the oldest extant copy, and the numerous surviving copies attest to its continued popularity within the Sumerian/Akkadian literary canons."...http://en.wikipedia.org/wiki/Instructions_of_Shuruppak

"By the mid-third millennium BC, however, there began what we might regard as genuine literature -- intelligent, creative, artistically-told stories and observations -- in both Sumer and Egypt. Egypt began writing a few centuries after the Sumerians....Recently, however, there's been a surge in ancient Sumerian literary scholarship. It seems to reveal much about their way of life and general attitude toward existence.".....http://rebirthofreason.com/Articles/Zantonavitch/Sumerian_Philosophy.shtml

"Who were the Sumerians? Where did they originate? For those who are not familiar with this remarkable, resourceful and intelligent people, who not only invented writing but also established the true mythological foundations of all main religions of the world, simply put, they taught us almost everything. Four different points regarding the current known archeological evidence are evaluated separately, and the Sumerians’ unique and strongly sacred mythological beliefs related to the lapis lazuli stone and the myth’s origin are analyzed. The uniqueness of the lapis mine location in the Hindu Kush Mountains and the unique (fingerprint) trace element and other physical characteristics of this metamorphic sacred blue stone of the Sumerians are the primary points of focus. The only possible and provable location of their original homeland, “based on the analysis” is; between the Caspian Sea and the Hindu Kush and Kopet Mountains, which is in Turkmenistan. This analysis and conclusion are based on “multiple independent factors”: current archeological excavations, the uniqueness of metamorphic lapis lazuli as a stone and over 6000 years of lapis lazuli mining at a fixed location (absolutely necessary requirements for the origin of strong lapis mythology) and current credible biogeographic DNA evidence and the distribution of R1b haplogroup of “Arbins”, as recently described by Dr. Anatole A. Klyosov. The Sumerians initial migration presumably began with a persistent drought in their original homeland, that eventually forced them to abandon their home migrate and resettle in the southern fertile lands of the Middle East between the Tigris and Euphrates Rivers and eventually further south near the banks of Nile River in north east Africa.".....The Origin of Sumerians by Metin Gunduz

"After about 3250 BC, another people migrated from its homeland, located probably northeast of Mesopotamia, and began to intermarry with the native population. The newcomers, who became known as Sumerians, spoke an agglutinative language unrelated apparently to any other known language."....Ancient Sumeria by Robert A. Guisepi.......http://history-world.org/sumeria.htm