Vimāna, Lung-gom, and the Flight of Rigden King…."Vimana: From that meaning Pushpaka or Dandumonara; the flying palace of King Rāvana of Lankapura…….a chariot of the gods, any mythical self-moving aerial car (sometimes serving as a seat or throne, sometimes self-moving and carrying its occupant through the air; other descriptions make the Vimana more like a house or palace, and one kind is said to be seven stories high)"…..http://en.wikipedia.org/wiki/Vimana 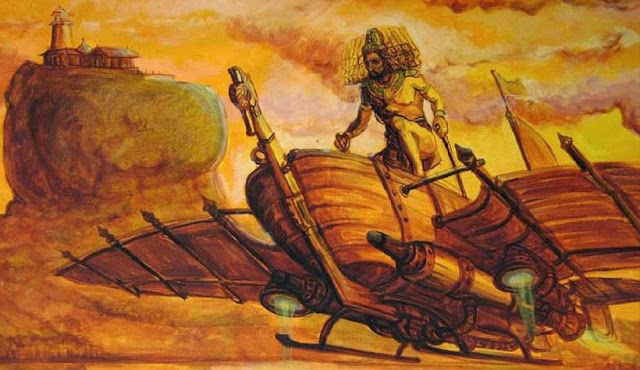 "… King Ravana (also spelled Rawana) reigned in Lankapuri, which was portrayed as a demon kingdom and Ravana as a demon ("rakshasa") king. He is said to have obtained his rule by wresting it from his half-brother Kubera……Ravana's parents were reportedly King Visravasmuni (or Visrawasa) and his second wife Kesini (or Kaikasi or Kaikesi). Almost all sources agree that Ravana was a devotee of Shiva who named him Ravana, whereas his original name was Dashanan (or Dasagriva). Ravana's father was also reported to be a Brahmin sage called Vishrava, which makes him a Brahmin, and because of his penance and devotion to the god Brahma, he was granted a boon: it was impossible for anything to kill him, except man….He seems to have lived about 5000 years ago and is credited by some sources with building a temple in honour of his parents that is still standing today. It is called the Isurumuniya. Other sources say that the temple was built by King Devenampiyatissa. The existence of this temple, among other factors, is proffered as evidence that Ravana was a real person and not just a mythological figure….http://en.wikipedia.org/wiki/Rāvana

"….most of the historic texts that mention Ravana are Indian (Hindu), not Sri Lankan. The most well-known is the Ramayana, an epic poem of 24,000 couplets in seven books, which tells the tale of how Ravana abducted king Rama's wife Sita, which led to a protracted war in which Ravana was eventually defeated by Rama with the help of the monkey king and the monkey general." ..http://www.helium.com/items/1051618-who-was-king-ravana

"The Hindu feast of Dussehra celebrates the death of Ravana, or more accurately, the victory of good over evil, while Divali (Diwali, the festival of lights) is said to celebrate the victorious homecoming of Rama and Sita"….http://en.wikipedia.org/wiki/Dasara

"One curiosity that most sources do not fail to mention, is the flying chariot, the Pushpaka Vimana, which Ravana stole from his brother. It is described as "that aerial and excellent chariot going everywhere at will"….Emperor Ravana lived about 5000 years ago in Lankapuri. As a buddhist, Ravana was vegetarian and worshiped Kashyapa Buddha. His kingdom was Lankapura and queen was Mandodari King's children were known as Upendraminika (son) and Sohili (daughter)."….http://ravanalankapura.wordpress.com/learning-about-king-ravana/

"Kubera (Sanskrit: कुबेर, Pali/later Sanskrit: Kuvera) also spelt Kuber, is the Lord of wealth and the god-king of the semi-divine Yakshas in Hindu mythology. He is regarded as the regent of the North (Dik-pala), and a protector of the world (Lokapala) His many epithets extol him as the overlord of numerous semi-divine species and the owner of the treasures of the world. Kubera is often depicted as a fat man, adorned with jewels and carrying a money-pot or money-bag, and a club……Originally described as the chief of evil spirits in Vedic-era texts, Kubera acquired the status of a Deva (god) only in the Puranas and the Hindu epics. The scriptures describe that Kubera once ruled Lanka, but was overthrown by his demon stepbrother Ravana, later settling in the city of Alaka in the Himalayas. Descriptions of the "glory" and "splendours" of Kubera's city are found in many scriptures…..Kubera has also been assimilated into the Buddhist and Jain pantheons. In Buddhism, he is known as Vaisravana, the patronymic used of the Hindu Kubera and is also equated with Pañcika, while in Jainism, he is known as Sarvanubhuti."….http://en.wikipedia.org/wiki/Kubera

H"indu Shahi ruler Jayapala (c. 964-1001), driving the Hindu Shahis back to Gandhara and Oddiyana, and extended his rule as far as northeastern Iran….Jayapala Shahi, or simply Jayapala, was ruler of the Kabul Shahi dynasty from 964 to 1001 CE in what is now eastern Afghanistan."...http://en.wikipedia.org/wiki/Jayapala

"The Ramayana is an ancient Sanskrit epic attributed to the poet Valmiki and an important part of the Hindu canon. One of the most important literary works of ancient India, the Ramayana consists of 7 chapters (Kānda), and narrates the story of Rama’s wife Sita being abducted by Rāvana, the demon (Rākshasa) king of Lanka…..According to the Ramayana, king Rāvana brought Sita Devi from India in a “Pushpaka Vimana” which is widely known in Sri Lanka as the “Dandu Monara Yanthranaya”, or Large Peacock Machine in Sinhala…. The Ramayana begins with Ayodhya in India and climaxes at Lankapura."….http://en.wikipedia.org/wiki/Ramayana

"The Kidnapping of Sita by Rāvana…….Rāvana was the king of Lanka and another 9 kingdoms. He was known as Dasis (or Dasa Shirsha) meaning 10 heads, because he had ten crowns, one each for his ten kingdoms…..His sister Surpanakha went to Jambudweepa for some business…..Surpanakha chanced upon Rama at his hermitage and became enamored with the handsome prince. Rama being faithful to his wife Sita did not respond and asked Surpanakha to approach Lakshmana who was unmarried. Surpanakha who felt humiliated by this, tried to attack Sita in anger saying Sita was the cause of the men’s contempt for her. Lakshmana then intervened and cut off Surpanakha’s nose…..Surpanakha terrified and in pain, flew at once to Lanka to seek the protection of Rāvana. …..When Rāvana asked his sister for the cause, Surpanakha said that she had seen Sita, a lady of incomparable beauty, and wanted to bring her for Rāvana. …..Ravana resolved to take revenge for the insult his sister has suffered, as well as to get lovely Sita for him self; and set out to abduct Sita and bring her to Lanka…..Ravana using a golden deer as a decoy visited Sita when she was alone in the guise of an old sage, abducted and brought her to Weragantota in Lanka in his plane, the Pushpaka Vimana…..Weragantota means the Place of Aircraft landing in Sinhala. This is the first place Sita Devi was brought to Lankapura (capita city of king Rāvana)……Sita Devi was kept at queen Mandothari’s palace at Lankapura. The place Sita was held captive is called Sita Kotuwa (also known as Seetha Kotuwa); which means Sita’s Fort in Sinhala. It is believed Rāvana had an aircraft repair centre at Gurulupotha close to Sita Kotuwa. Gurulupotha means Parts of Birds in Sinhala."….http://www.tourslanka.com/sri-lanka-map/ramayana-sites

"Ravana moved Sita from Sita Kotuwa to Ashok Vatika the salubrious garden in the mountains. The route too was said to be spectacularly beautiful, as Ravana wanted to show Sita the beauty of his kingdom…..Ashok Vatika is a garden where Rāvana held Sita captive….

"The Ramayana has it that Dasrath, meaning a small ruler with just ten chariots, fell in love with his second wife Kaikeyi after she tended his wounds after a local battle. Kaikeya means that she was the daughter of the king of Kaikay, or Caucasus, like the name Gandhari of the Mahabharata had been derived from Gandhara ( Kandahar)…..

"The many Ramayanas: The story of Ram varies from Central Asia to Bali….The Ramayana is undoubtedly one of the greatest stories ever written and the film Star Wars I is actually a futuristic interpretation of this great tale. The most popular version of the epic is the account written by Valmiki, usually dated to about 300 BC but probably only put into writing after 400 AD. As most historians believe that the southern movement of the Aryas only began about 800 BC the events of the Ramayana must have occurred after this date or else the events of the myth must have occurred outside peninsular India…..There is no empirical historic evidence about the exact location in India of places like Ayodhya, Chitrakoot, Dandakaranya, Lanka, Panchavati, Videha, Kosala, etc., that are an intrinsic part of the Indian legend….. It is also very paradoxical that although archaeological evidence has been found at every site named in the Mahabharat , there have been none to support any of the sites named in the Ramayana …..

"In the enumeration of the countries of north, Ramayana references Kambojas, Yavanas, Shakas, Paradas and then further northwards, it refers to the land of the Uttarakurus lying beyond river Shailoda and Kichaka bamboos valleys. It gives very vivid and graphic picture of Uttarakuru region."…..River Shailoda of Ramayana and of Mahabharata has been variously identified with river Khotan, Yarkand, and Syr (Jaxartes) by different scholars….Raghuvamsa also refers to the Kichaka bamboos of Central Asia in the eastern regions of the Pamirs or Meru mountains which were known as Dirghavenu in Sanskrit."…..http://en.wikipedia.org/wiki/Uttarakuru

"According to Jain tradition, Ram, as an evolved soul, was not capable of taking anyone’s life, even that of Ravana and it was his brother Lakshman who killed his enemies. As a result Lakshman goes to hell while Ram finds release ( Kaivalya )…..In Srilanka, the myth of the Ramayana is told in reverse with Ravana portrayed as the great hero and Ram as his evil, blue faced, invader from the North. There are many different versions of the great epic in Bali, Cambodia, Vietnam and Thailand."

"Valmiki’s Ram was a very human hero but the later glorifications gave him the attributes of a god. Actually he was only raised to being an incarnation of Vishnu after the Ramachiritramanas written by Goswami Tulsidas ( 1534- 1623 AD)…..