"The earliest writing systems evolved independently and at roughly the same time in Egypt and Mesopotamia, but current scholarship suggests that Mesopotamia’s writing appeared first. That writing system, invented by the Sumerians, emerged in Mesopotamia around 3500 BCE. At first, this writing was representational: a bull might be represented by a picture of a bull, and a pictograph of barley signified the word barley. Though writing began as pictures, this system was inconvenient for conveying anything other than simple nouns, and it became increasingly abstract as it evolved to encompass more abstract concepts, eventually taking form in the world’s earliest writing: cuneiform. An increasingly complex civilization encouraged the development of an increasingly sophisticated form of writing. Cuneiform came to function both phonetically (representing a sound) and semantically (representing a meaning such as an object or concept) rather than only representing objects directly as a picture.".....http://edsitement.neh.gov/lesson-plan/cuneiform-writing-system-ancient-mesopotamia-emergence-and-evolution 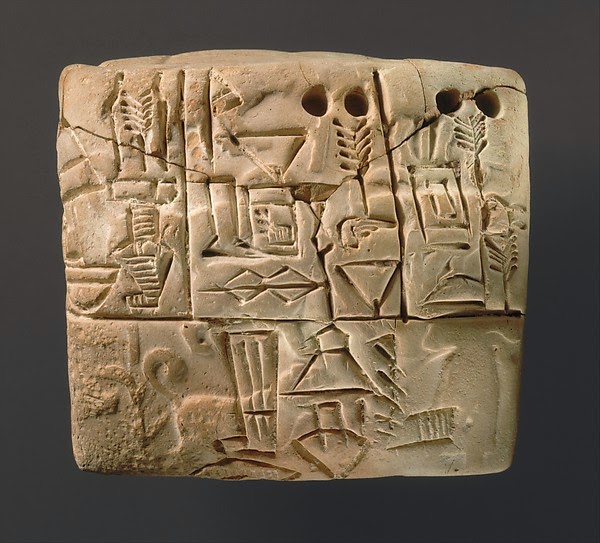 "Cuneiform script is one of the earliest known systems of writing,distinguished by its "wedge-shaped" marks on clay tablets, made by means of a blunt reed for a stylus. The name cuneiform itself simply means "wedge shaped", from the Latin cuneus "wedge" and forma "shape," and came into English usage "probably from Old French cunéiforme.".... ....http://en.wikipedia.org/wiki/Cuneiform

"Emerging in Sumer in the late 4th millennium BC (the Uruk IV period), cuneiform writing began as a system of pictographs. In the third millennium, the pictorial representations became simplified and more abstract as the number of characters in use grew smaller, from about 1,000 in the Early Bronze Age to about 400 in Late Bronze Age (Hittite cuneiform). The original Sumerian script was adapted for the writing of the Akkadian, Eblaite, Elamite, Hittite, Luwian, Hattic, Hurrian, and Urartian languages, and it inspired the Ugaritic and Old Persian alphabets."....http://en.wikipedia.org/wiki/Cuneiform

"The cuneiform script proper developed from pictographic proto-writing in the late 4th millennium BC. Mesopotamia's "proto-literate" period spans roughly the 35th to 32nd centuries. The first documents unequivocally written in the Sumerian language date to c. the 31st century, found at Jemdet Nasr.....Jemdet Nasr (Arabic: جمدة نصر‎) is a tell or settlement mound in Babil Governorate (Iraq) that is best known as the eponymous type site for the Jemdet Nasr period (3100–2900 BC)."....http://en.wikipedia.org/wiki/Jemdet_Nasr 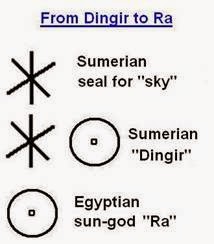 "Dingir (usually transliterated diĝir, pronounced /diŋir/) is a cuneiform sign, most commonly the determinative for "deity" although it has related meanings as well. As a determinative, it is not pronounced, and is conventionally transliterated as a superscript "D" as in e.g. DInanna. Generically, dingir can be translated as "god" or "goddess"....The sign in Sumerian cuneiform (DIĜIR, 𒀭) by itself represents the Sumerian word an ("sky" or "heaven"), the ideogram for An or the word diĝir ("god"), the supreme deity of the Sumerian pantheon. In Assyrian cuneiform, it (AN, DIĜIR, ) could be either an ideogram for "deity" (ilum) or a syllabogram for an, or ìl-. In Hittite orthography, the syllabic value of the sign was again an."...http://en.wikipedia.org/wiki/Dingir

"The concept of "divinity" in Sumerian is closely associated with the heavens, as is evident from the fact that the cuneiform sign doubles as the ideogram for "sky", and that its original shape is the picture of a star. The original association of "divinity" is thus with "bright" or "shining" hierophanies in the sky. A possible loan relation of Sumerian dingir with Turkic Tengri "sky, sky god" has been suggested.".....http://en.wikipedia.org/wiki/Dingir

"The mes were originally collected by Enlil and then handed over to the guardianship of Enki who was to broker them out to the various Sumerian centers beginning with his own city of Eridu and continuing with Ur, Meluhha, and Dilmun. This is described in the poem, "Enki and the World Order" .....http://en.wikipedia.org/wiki/Me_(mythology)

"Widely considered to be the cradle of civilization in the West, Bronze Age Mesopotamia included Sumer and the Akkadian, Babylonian, and Assyrian empires, all native to the territory of modern-day Iraq. In the Iron Age, it was controlled by the Neo-Assyrian and Neo-Babylonian empires. The indigenous Sumerians and Akkadians (including Assyrians and Babylonians) dominated Mesopotamia from the beginning of written history (c. 3100 BC) to the fall of Babylon in 539 BC, when it was conquered by the Achaemenid Empire.".....http://en.wikipedia.org/wiki/Ancient_Mesopotamia

"The earliest known Sumerian king whose name appears on contemporary cuneiform tablets is Enmebaragesi of Kish. ....Enmebaragesi (Me-Baragesi, En-Men-Barage-Si, Enmebaragisi, fl. ca. 2500 BC) was a king of Kish, according to the Sumerian king list. The list states that he subdued Elam, reigned 900 years, and was captured single-handedly by Dumuzid "the fisherman" of Kuara, predecessor of Gilgamesh......Kish (Sumerian: Kiš; transliteration: Kiŝki; cuneiform: 𒆧𒆠; Akkadian: kiššatu) was an ancient city of Sumer in Mesopotamia, considered to have been located near the modern Tell al-Uhaymir....

".....three centers of civilization all arose in the ancient near east.....Sumerian, Egyptian and the Harappan culture of the Indus Valley......They all started around 3500 BC and lasted until 2000 BC. .....these three civilizations that came into being at the same time - and relatively close to each other - was civilization a "gift from the gods"? ...... the Tree of Life with all its diverse interpretations is the strongest consistent fable shared by the three great river valley civilizations. It is the Mes and Huluppu tree of Sumer, the Pipal to become the Bhodi tree of the Indus Valley and the sycamore-fig tree (Hathor's tree) in Egypt......Sumerians first appeared about 4800 B.C. at a place called Al-Ubaid. ......clay tablets were written by the Sumerians whose earliest existence currently dates back to about 3500 BC. but suspect the Ubaid culture to be pre-Sumerian. ...They built the first cities, developed the first monarchy, had the first written language, had a highly developed art, their math was based on the decimal - units of ten, base 10, for commerce and base 60 for astronomy, invented the calendar and the zodiac......

"...Enki...En Ki ....the exact meaning of his name is uncertain: the common translation is "Lord of the Earth": the Sumerian en is translated as a title equivalent to "lord"; it was originally a title given to the High Priest; ki means "earth"; but there are theories that ki in this name has another origin, possibly kig of unknown meaning, or kur meaning "mound"....Adapa, the first man fashioned, later goes and acts as the advisor to the King of Eridu, when in the Sumerian Kinglist, the "Me" of "kingship descends on Eridu".....http://en.wikipedia.org/wiki/Enki 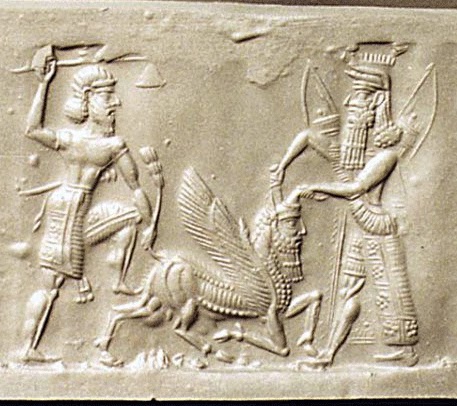 The Gilgamesh cylinder seal, Assyria, ca.7th c. BC.....Here Gilgamesh together with his lover Enkidu are fighting the 'bull of heaven' sent by goddess Ishtar to destroy the city of uruk when Gilgamesh rejected her advances.... The Great Epic of Gilgamesh.....adapted from a piece written by Bill Weintraub....http://gilgamesh-story.blogspot.com/

"Enkidu ( EN.KI.DU3, "Enki's creation") is a central figure in the Ancient Mesopotamian Epic of Gilgamesh. Enkidu was formed from clay and saliva by Aruru, the goddess of creation, to rid Gilgamesh of his arrogance. In the story he is a wild man, raised by animals and ignorant of human society until he is bedded by Shamhat. Thereafter a series of interactions with humans and human ways bring him closer to civilization, culminating in a wrestling match with Gilgamesh, king of Uruk. Enkidu embodies the wild or natural world, and, though equal to Gilgamesh in strength and bearing, he acts in some ways as an antithesis to the cultured, urban-bred warrior-king. Enkidu then becomes the king's constant companion and deeply beloved friend, accompanying him on adventures until he is stricken with illness and dies. The deep, tragic loss of Enkidu profoundly inspires in Gilgamesh a quest to escape death by obtaining godly immortality."....Jastrow, Jr., Morris and Clay, ALbert T., An Old Babylonian Version of the Gilgamesh Epic, p.20, Yale University Press, New Haven, Connecticut, 1920 Older sources sometimes transliterate his name as Enkimdu, Eabani, or Enkita. Enkidu is a modern variant.