The Sogdian Civilization & the Tibet Migration (500 BC)

"The Sogdians were the inhabitants of fertile valleys surrounded by deserts, the most important of which was the Zeravshan valley, in today’s Uzbekistan and Tajikistan. This Iranian-speaking people had a fifteen-centuries-long historical identity between the sixth century BCE and the tenth century CE when it vanished in the Muslim, Persian-speaking world. Although the Sogdians constructed such famous towns as Samarkand and Bukhara, they are quite unknown.....When did the first Sogdian arrive in China to trade? Various answers have been given to this quite simple question, but one of the most popular, which can still be found in many recent books or articles, makes Alexander the Great the villain of the story. Due to the disaster which befell Sogdiana during his campaigns there in 329-328 BCE, the Sogdians would have been forced to emigrate as far east as China.... the Chinese, Yuezhi, Bactrians, Indians and Sogdians who created the historical Silk Road did not need Greek help....Trade is yet another item that should be removed (after irrigation, town-planning and state-formation) from the long list of supposed Greek influences in the history of Central Asia. The list of real influences is already full enough with coinage, iconography and the alphabet (in Bactria)!".....http://www.silkroadfoundation.org

".....the Sogdian civilization as well as the Kushanian state arose on the territory of Central Asia in Sogd (the motherland of the Kushan state was Bactria)......pre-Moslem Sogd remained a relatively small country in the basins of the Zeravshan and Kashka-Darya rivers. In the 6th - 9th centuries it was far from being a united centralized state and could be rather defined as a conglomeration of separate domains..... the pre-Moslem rulers of the Central Asian Mesopotamia bore a much stronger resemblance to ancient Greek basileis than to the Asiatic despots (meaning the Achaemenian "king of kings").....Bartold (1896a, 1964b), A few words about the Arian Culture in Central Asia // Sochineniya, XI, 2, Moscow (in Russian). 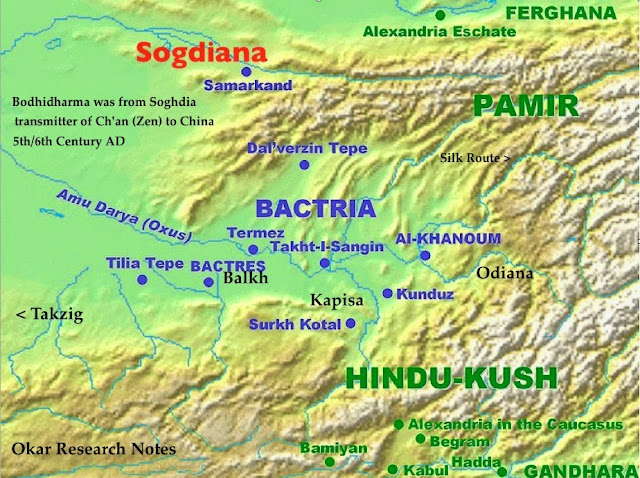 "The Arabian and Persian authors reporting about the Moslem conquest of Central Asia related on mass migrations to that region from Iran and the Middle East, and on departure of the Sogdian merchants from there to the oases of the present Sinkiang (Hsin-chiang, Xinjiang) and to China1. Impressing are also the records of the Chinese sources on migrations of the Sogdian emigrants to China - to the region Tun-huang (Dunhuan), Druan in Sogdian, to Inner Mongolia, and so on...The migration from Sogd to the present Sinkiang (Hsin-chiang, Xinjiang)....was enormous. "....http://www.cais-soas.com/CAIS/Culture/peculiarities_sogdian.htm#footnote14

"Chinese geographical text of the 9th century from Tun-huang (Dunhuan) relates on Kan Yang-tian’s arrival here, "the great chieftain from the Kan empire" who along with other Samarkandians inhabited the city which had been founded during the reign of the Sui dynasty (ruled Northern China from 581 until 618 - B. Stavisky) and abandoned by the Chinese after 618. Kan Yangtian, "the great chieftain from the Kan empire (Samarkand)", came to the East and settled in this town. He was accompanied by many Hu (i.e. by the Sogdians), so this place became populated and was called Tian-he, (i.e. "associated with Kan Yangtian") ..."....Chuguevsky (1971), New Materials on the History of the Sogdian Colony in the Region of Tsun Khuasian // Strany i narody Vostoka, X, Moscow (in Russian).

"Alexander united Sogdiana with Bactria into one satrapy in 327 BC.... The military power of the Sogdians never recovered. Subsequently Sogdiana formed part of the Hellenistic Greco-Bactrian Kingdom, founded in 248 BC by Diodotus, for about a century.".....http://en.wikipedia.org/wiki/Sogdia

"...The Sogdians' main religion was Zoroastrianism...... the discovery of murals depicting votaries making offers before fire-holders and ossuaries from Samarquand, Panjikent and Er-Kurgan held the offerings in accordance with Zoroastrian ritual......However, the Sogdians epitomized the religious plurality found along the trade routes. The largest body of Sogdian texts are Buddhist, and Sogdians were among the principal translators of Buddhist sutras into Chinese. However, Buddhism did not take root in Sogdiana itself. Additionally, the Bulayiq monastery to the north of Turpan contained Sogdian Christian texts and there are numerous Manichaean texts in Sogdiana from nearby Qocho.".....J. Rose, 'The Sogdians: Prime Movers between Boundaries', Comparative Studies of South Asia, Africa

".....Sogdiana had multi-layered links with India. R H Sulemanov in a paper presented in a seminar held in Tashkent in 2000 AD on India and Central Asia (pre Islamic period) has brought out many Indian parallels in ancient cults of Sogdiana. He has especially mentioned the funeral rites among the tribes and the same in Vedic tradition, the cult of fire worship and Mithraism the legend of Gandharvas (water deities) and the Ganges. Place names such as Kanka or Ganga has also the central Asian connections. The Mahabharatha mentions the name of Kanka (Kangu tribe). The water deity was also worshipped in Central Asia as an ideal of perfect womanhood. Apart from the Puranic cults mentioned above, five Hindu gods were known to have been worshipped in Sogdiana, namely Brahma, Indra, Mahadeva (Shiva), Narayana and Vaishravana, who had the Sogdiana names of Zravan, Adabad and Veshparkar respectively. The four-armed goddess riding the lion may be Durga. Portable fire altars associated with Mahadeva-Veshparkar, Brahma-Zravan and Indra-Abdab found in an 8th-century mural at Panjakent also deserves special mention...".....India and Central Asia: classical to contemporary periods By J. N. Roy, Braja Bihārī Kumāra, Astha Bharati

"The Yarlung dynasty appears to have continued the collaborative relationship the Zhang Zhung had with the Iranian Aryans. The relationship continued even after the Arabs had conquered the Persian empire. Since it is the Tibetans who had become the dominant eastern power in the seventh century CE, it is they who provided the Persians and Sogdians sanctury. As they fled east, the Persians first took refuge in Sugd (Sogdiana) and their presence there has been recorded on Sogdian inscriptions in Panjakand and Paykand. Then as the Persians and Sogdians continued east into China, their presence during the ninth century was recorded on a Chang’an funerary stele belonging to Mahshi Suren."....Fang-kuei Li, "Notes on Tibetan Sog", Central Asiatic Journal, III, 2, 1957-58: 139-142

"...Author A. Nikitin (A. Nikitin, G. Roth, "A New Seventh-Century Countermark with a Sogdian Inscription", The Numismatic Chronicle, 155, 1995: 277-279.) has proposed that the rise of Tibetan power was because of the assistance of Persian refugees fleeing from the Arab invasion of Persia in the 650s CE. According to Nikitin, when the Persians arrived in the Tibetan court, they trained the Tibetans in the art of imperial warfare. According to another author Beckwith, a Chinese source describes the Yarlung Tibetan warriors and horses as being completely clad in armour in the Sassanian fashion. An important military technological advance and advantage for the Tibetans was their newly acquired ability to produce chain mail for armour. After the Arab take over of the Sassanian Iranian state, the Yarlung Tibetans fought against the Arabs together with his Turkic allies in order to expel them from Sugd (Sogdiana)( C. I. Beckwith, The Tibetan Empire in Central Asia: a History of the Struggle for Great Power among Tibetans, Turks, Arabs, and Chinese During the Early Middle Ages, Princeton, 1987: p. 108-110.)."

"The Yarlung captured Khotan – an Iranian-Tajik kingdom allied with Kashmir and Sugd (Sogdiana). The Tibetan conquest of Khotan was followed by the immigration of many Khotanese Buddhist monks, craftsmen and merchants into Tibet...."...H. H. R. Hoffmann, "The Tibetan Names of the Saka and the Sogdians", Asiatische Studien, XXV, 1971: p. 451-453

"The importance of Sogdian music and dance particularly in Central Asia, and later at the Tang court, should not be underestimated. The Uighurs, who nowadays have an adaptation of the Arabic alphabet, in the beginning adopted the Sogdian script (derived by the Syriac alphabet but written in vertical lines). The Uighurs handed down such an alphabet to the Mongols and it is still used in the Inner Mongolia Autonomous Chinese Province. Later, even the Manchu founders of the Qing Dynasty (1644-1911) adopted the same alphabet with some modifications."......http://iranian.com/History/2001/July/Sogdiana/ 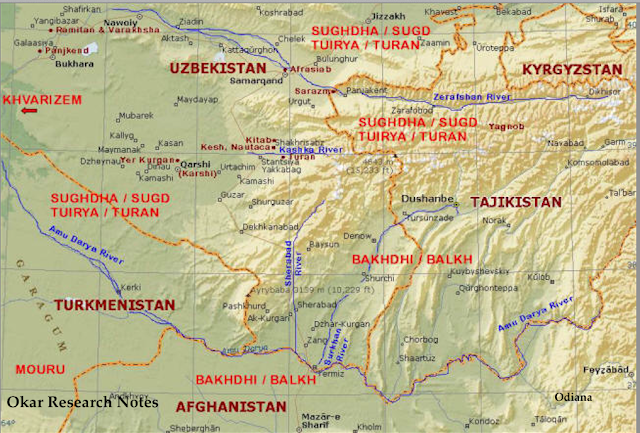