The Shakti Peethas (Sanskrit: शक्ति पीठ, Śakti Pīṭha, seat of Shakti) are places of worship consecrated to the goddess Shakti or Sati, the female principal...They are sprinkled throughout the Indian subcontinent.....This goddess Shakti, the Goddess of power is the complete incarnation of Adi Shakti, has three chief manifestations, as Durga, Goddess of strength and valour, as Mahakali, goddess of destruction of evil and as Goddess Gowri, the goddess of benevolence....There are 51 Shakti Peeth linking to the 51 alphabets in Sanskrit. Each temple has shrines for Shakti and and Kalabhairava, and mostly Shakti and Kalabharava in different Shakti Peeth have different names..... there are 56 other famous Peethas recognised by religious texts. According to the Pithanirnaya Tantra the 56 peethas are scattered all over India, Sri Lanka, Bangladesh, Nepal, Tibet, Bhutan and Pakistan. The Shivacharita besides listing 52 maha-peethas, speaks about 26 more upa-peethas. "...http://en.wikipedia.org/wiki/Shakti_Peethas 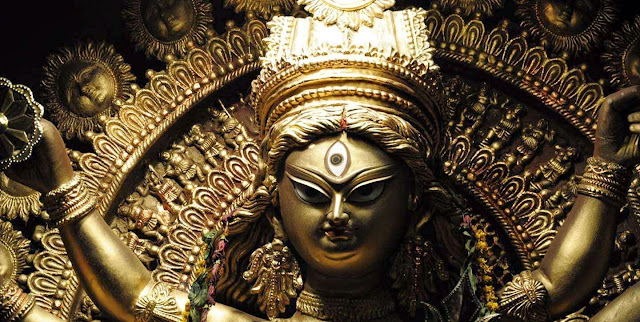 "Goddess Durga.....also called Divine Mother.....is also called by many other names, such as Parvati, Ambika, and Kali In the form of Parvati, She is known as the divine spouse of Lord Shiva and is the mother of Her two sons, Ganesha and Karttikeya, and daughter Jyoti....the symbolism associated with Goddess Durga: A tiger symbolizes unlimited power. Durga riding a tiger indicates that She possesses unlimited power and uses it to protect virtue and destroy evil. The eighteen arms of Durga signify that She possesses combined power of the nine incarnations of Lord Vishnu that have appeared on the earth at different times in the past. The tenth incarnation, the Kalkin (a man on a white horse), is still to come."

"The list of Shakti Pithas differ in various religious texts. Many mention Vimala or Jagannath temple complex as a Shakti Pitha, and calls the location by various names. In the Kalika Purana, four Pithas (centres of Tantrism) are mentioned, corresponding to the four cardinal directions. The Oddiyana or Uddiyana in the west hosts the temple of Katyayini (identified with Vimala) and her consort Jagannath. The Hevajara Tantra, which has a similar list, also mentions Katyayini as the Bhairavi and Jagannath as the Bhairava in the Pitha of Udra (Odra)."....Sircar, Dines Chandra (1998). The Śākta Pīṭhas. Motilal Banarsidass Publ. ISBN 978-81-208-0879-9. 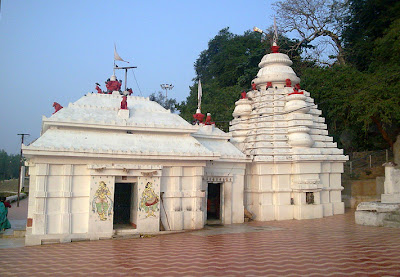 Shakta Pitha Bhattarika of Badamba in the district of Cuttack

Katyayini hi:कात्यायिनी is the sixth form amongst the Navadurga or the nine forms of Hindu goddess Parvati or (Shakti), worshipped during the Navratri celebrations..... this is the second name given for Parvati in amarakosha, the Sanskrit lexicon. (uma katyayani gaouri kali haimavathi iiswari) In Shaktism she is associated with the fierce forms of Shakti or Durga,a Warrior goddess, which also includes Bhadrakali and Chandika, and traditionally she is associated with the colour red, as with Goddess Durga, the primordial form of Shakti, a fact also mentioned in Patanjali's Mahabhashya on Pāṇini, written in 2nd BCE.She is first mentioned in the Taittiriya Aranyaka part of the Krishna Yajurveda. Skanda Purana mentions her being created out of the spontaneous anger of Gods, which eventually led to slaying the demon, Mahishasura, mounted of the lion given to her by Goddess Gauri. Her exploits are described in the Devi-Bhagavata Purana and Devi Mahatmyam, part of the Markandeya Purana attributed to sage Markandeya Rishi, who wrote it in Sanskrit ca. 400-500 CE. Over a period of time, her presence was also felt in Buddhist and Jain texts and several Tantric text, especially the Kalika Purana (10th century), which mentions Uddiyana or Odradesa (Odisha), as the seat of Goddess Katyayani and Lord Jagannath.".....http://en.wikipedia.org/wiki/Katyayini

"The Shree Vajreshwari Devi Mandir is a Hindu temple dedicated to the goddess Vajreshvari, located in the town Nagarkot, in the Kangra district of Himachal Pradesh, India..... The Kangra Fort is situated nearby...... The left breast of Sati fell at this spot, thus making it a Shakti Peeth.....The original temple was built by the Pandavas at the time of Mahabharatha. Legend says that one day Pandavas saw Goddess Durga in their dream in which she told them that she is situated in the Nagarkot village.....