"Much of the Trungpa Vidyadhara's work, especially in the last ten years of his life, was dedicated to propagating what he called "enlightened society," which would help the world in many ways and, at the same time, provide a home for buddhadharma in the West. As a model, he pointed to the Kingdom of Shambhala, an ancient (some say mythical, some say real, 'most CCL....could care less') Kingdom of Central Asia ruled by a lineage of enlightened monarchs.".....http://chronicleproject.com/biography.html 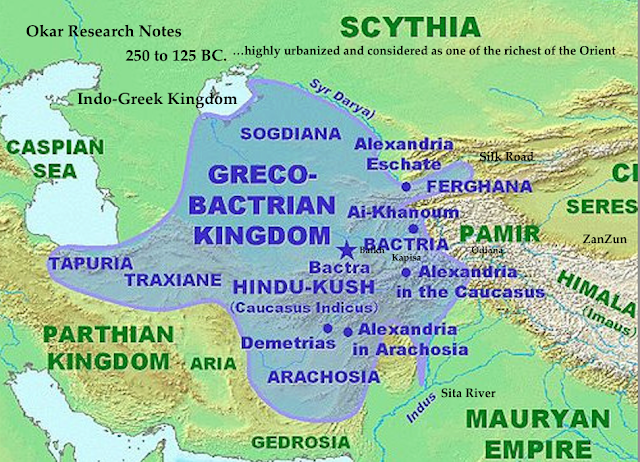 900 BC....(Tib. Dawa Sangpo) c. 900 to 876 BC....Suchandra, Dawa Zangpo (878-876 BC?) "Good Moon" (Tibetan) .....In 878 BC he constructed a three dimensional mandala of Kalachakra....... "Note: the Kalachakra calculations put the life of Shakyamuni Buddha quite a bit earlier than is generally accepted, and the Tibetans produced a number of divergent calculations of the dates given here. Also, many of the names of the kings are often wrongly Sanskritized (back-translated from the Tibetan) in Western publications."...http://en.wikipedia.org/wiki/Kings_of_Shambhala


564 BC......Cyrus The Great (Cyrus II, Kourosh in Persian, Kouros in Greek)..... (580-529 BC) was the first Achaemenid Emperor. He founded Persia by uniting the two original Iranian Tribes- the Medes and the Persians.

340 BC.....Chandragupta Maurya (340 BC – 298 BC) was the founder of the Mauryan Empire and the first emperor to unify India into one state. Grandfather of Ashoka....A medieval inscription represents the Maurya clan as belonging to the solar race of Kshatriyas.

320 BC....Bindusara Maurya (c. 320 BC – 272 BC) was emperor of the Maurya Empire from 298 BC – 272 BC. During his reign, the empire expanded southwards. He had two well-known sons, Susima and Ashoka. The Greeks called him Amitrochates or Allitrochades - the Greek transliteration for the Sanskrit word 'Amitraghata'

285 BC.....Diodotus I.....Diodotus I Soter (Greek: Διόδοτος Α' ὁ Σωτήρ) (c. 285 BC – c. 239 BC) was Seleucid satrap of Bactria....The Hellenistic kings of the Greco-Bactrian Kingdom in Bactria & Gandhara, today's northern Afghanistan. Their reign spans the period from 250 BCE to 125 BCE.....The Greco-Bactrian kingdom was succeeded in northerwestern India by the Indo-Greek Kingdom....Greek King or Mauryan Emperor Ashoka?.....Both lived in the same era. Both died at the same date...

240 BC.....Antiochus Nikator....Antiochus I Nikator of Bactria was possibly a Graeco-Bactrian king of the dynasty of Diodotus I, who ruled for some period between 240 - 220 BCE.

200 BC........Demetrius I of Bactria....Demetrius I (Greek: ΔΗΜΗΤΡΙΟΣ, Persian: ‎/Pashto: دیمتریوس بلخی‎) was a Bactrian king (reigned c. 200–180 BC) of Gandhara. He was the son of Euthydemus and succeeded him around 200 BC, after which he conquered extensive areas in what now is eastern Iran thus creating an Indo-Greek kingdom far from Hellenistic Greece. He was never defeated in battle and was posthumously qualified as the Invincible (Aniketos)

185 BC......Antimachus I...Anthimachus I Theos (known as Antimakha in Indian sources) was one of the Greco-Bactrian kings, generally dated from around 185 BC to 170 BC....He was king of an area covering parts of Bactria and probably also Arachosia in southern Afghanistan

170 BC......Eucratides....Eucratides I Megas (reigned c. 170–145 BCE) was one of the most important Greco-Bactrian kings....."Around the same time, two great men started to rule: Mithridates among the Parthians, and Eucratides among the Bactrians" Justin XLI,6

170 BC.......Antimachus II...Antimachus II Nikephoros "The Victorious" was an Indo-Greek king. He ruled on a vast territory from the Hindu-Kush to the Punjab around 170 BCE.

165 BC......Menander...Menander I Soter "The Saviour" (known as Milinda in Indian Pali sources) was the Indo-Greek king (165 BC-130 BC) who established a large empire in the South Asia and became a patron of Buddhism. Menander was born in the Caucasus Asia, and was initially a king of Bactria...

170 BC.....Plato of Bactria....Plato was a Greco-Bactrian king who reigned for a short time in southern Bactria or the Paropamisade during the mid 2nd century BCE. The style of Plato's coins suggests that he was a relative — most likely a brother since Plato is a middle-aged man on his coins — of Eucratides the Great, whose rise to power is dated to around 170–165 BCE.

159 BC....."Manjushrí Kírti (Tib. Rigdan Jampel Dakpa) is said to have been born in 159 BCE and ruled over Shambhala.....Manju Yashas/Manjushrikirti/Manjughoshikirti (Skt), Jampäl Dragpa (Tib)(Jamyang Drag(Tib)) (276 - 176 BC) The Renowned and Glorious Gentle One .......The 8th king, Manjushrikirti was an incarnation of Manjushri and he put the Kalachakra teachings in a condensed and simplified form, called the "Sri Kalachakra". He founded a second line of 25 Kings. He also converted a group of non-Buddhist Brahman priests of Shambala to Buddhism and gave them the Kalachakra initiation to unite all inhabitants into one "vajra family" - or family of tantric practitioners.

130 BC......"Zhang Qian (Chinese explorer ...c 130 BCE) ......Ta-hia [Bactria] is more than 2000 li to the southwest of Ta-yuan, on the south bank of the K'ui-shui [Oxus]. The people have fixed abodes and live in walled cities and regular houses like the people of Ta-yuan. The population of Ta-hia may amount to more than a million. Their capital is called Balka..... a number of Buddhist religious centers flourish near the town which evidently serves as a pilgrimage center for leaders from far away.....north of the K'ui-shui [Oxus] and made it the court of their king."...... http://mrgoethals.weebly.com/uploads/1/6/5/4/16542680/world_history_lesson_20_-_afro eurasian_trade_patterns_before_600_ce_primary_sources.pdf

100 AD....King Kanishka of the Kushan Empire (its capital, Bagram, is situated slightly east of Bamian) ruled over Central Asia from 78-144 A.D. and is revered as a patron of Buddhism. His kingdom extended from Bukhara in the west to Patna in the Ganges Valley in the east, from the Pamirs in the north to central India in the south. Contact between Kanishka and the Chinese in Central Asia may have inspired the transmission of Indian ideas, particularly Buddhism, to China, where it first appeared in the 2nd century A.D. Kanishka had convened the Fourth Buddhist Council in Kashmir that marked the formal rise of Mahayana Buddhism in Tibet, Central Asia, and China."......http://www.rinpoche.com/stories/tibet1.htm

644 AD...."Based on the account of the Chinese pilgrim Hiuen Tsang, who visited in AD 644, it seems that in later times Kapisa was part of a kingdom ruled by a Buddhist kshatriya king holding sway over ten neighboring states, including Lampaka, Nagarahara, Gandhara, and Banu...."Hiuen Tsang (Xuanzang 602-664) writes that "the king of Kapisa is Kshatriya by caste. He is of shrewd character (nature) and being brave and determined, he has brought into subjection the neighboring countries, some ten of which he rules....Hiuen Tsang clearly addresses the ruler of Kapisa/Kabul, whom he had personally met, as devout Buddhist and a Kshatriya and not a Tu-kiue/Tu-kue (Turk) "......Si-Yu-KI V1: Buddhist Records of the Western World, Edition 2006, p 54-55, Hiuen Tsiang.

698 AD...."In 672 an Arab governor of Sistan, Abbad ibn Ziyad, raided the frontier of Al-Hind and crossed the desert to Gandhara, but quickly retreated again. The marauder Obaidallah crossed the Sita River and made a raid on Kabul in 698 only to meet with defeat and humiliation. Vincent Smith, in Early History of India, states that the Turkishahiya dynasty continued to rule over Kabul and Gandhara up until the advent of the Saffarids in the ninth century. Forced by the inevitable advance of Islam on the west, they then moved their capital from Kapisa to Wahund on the Indus, whence they contin­ued as the Hindushahiya dynasty. This was in 870 A.D. and marks the first time that the KINGDOM OF SHAMBHALA actually came under Moslem domination.".....Dharma Fellowship of His Holiness the 17th Gyalwa Karmapa, Urgyen Trinley Dorje....http://www.dharmafellowship.org

700 AD....."Phrom Ge-sar was the successor of Sahi Tegin (700-738 CE) "King of Khurasan'.......the Kushan territories of Gandhāra and Udayana..... in 739, Tegin Shah abdicated the throne of Gandhara in favour of his son, Fu-lin-chi-p'o (also known as Fromo Kesaro, the Bactrian form of his name).........this victory occurred during the Reign of Fromo Kesaro (739-746 AD) and may have contributed to his transformation in later historical tradition into the Tibetan national hero Phrom Ge-sar, whose figure still survives today in the folklore of the territory of ancient Gandhara...The ancient coins read in Bactrian script: "The Glory Increased! The Majestic Sovereign!".. The territory was defined by natural boundaries: the Hindu Kush mountain range ... Beyond the foothills north of Gandhara was the ancient region of Udayana...".

720 AD....Kingdom of Oddiyana.......East/Southeast of Balkh....embracing parts of Pakistan, Afghanistan, and even Western Tibet (Zhang-zhung)." [John Myrdhin Reynolds1996, The Golden Letters. Snow Lion Publications]......homeland of both the Vajrayana and Dzogchen teachings, and is said to be the land where Garab Dorje, Vairotsana, Padmasambhava and Tilopa, amongst others, received the transmissions of Dzogchen......inhabited by gentle people often clothed in white.....in 720 A.D., the T'ang Annals state that the Emperor sent ambassadors to Uddiyana to confer the investiture on the new king........Uddiyana is not an invisible, celestial buddha field where people cannot go. This is a buddha field where fortunate people can visit. In fact, there are five holy places like this known as “The Five Vajrayana or Tantrayana Sources,” places where Vajrayana teachings are preserved and taught. Uddiyana is one such realm, and it is said that it is located somewhere in what is now known as Pakistan. Many great masters of Tibet, as well as scholars of China and India, have visited Uddiyana, the source of Tantrayana teachings.".........The Life of Tilopa.....HH 17th Gaylwa Karmapa.....Translator: Ringu Tulku Rinpoche.....http://www.kagyu.org/ktd/densal/archives/1801/hhtilopa.php

870 AD...."The Shahis of Kabul/Gandhara are generally divided into the two eras of the so-called Buddhist-Shahis and the so-called Hindu-Shahis, with the change-over thought to have occurred sometime around AD 870....(Katorman or Lagaturman) of the last king of the so-called first Shahi line of Kabul/Kapisa ....

"870 A.D. marks the first time that the KINGDOM OF SHAMBHALA actually came under Moslem domination.".....http://www.dharmafellowship.org/biographies/historicalsaints/lord-padmasambhava.htm#eightcentury