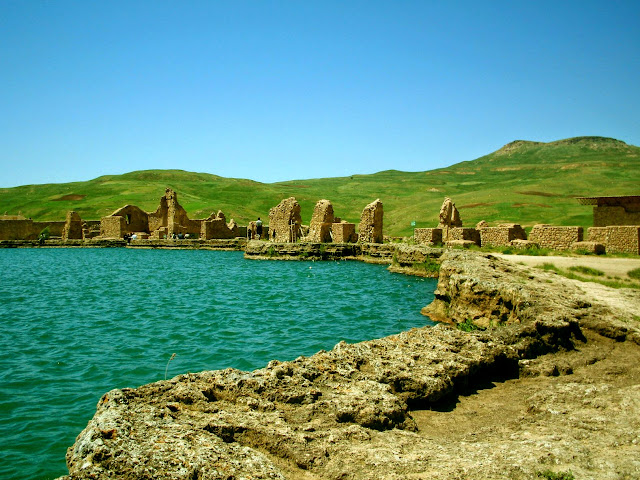 "The Sulayman Mountain (also known as Taht-I-Suleiman, Sulayman Rock or Sulayman Throne) is the only World Heritage Site in the country of Kyrgyzstan. It is located in the city of Osh and was once a major place of pre-Muslim pilgrimage. The rock rises abruptly from the surrounding plains of the Fergana Valley.....Osh (Kyrgyz: Ош) is often referred to as the "capital of the south". The city is at least 3,000 years old......The city is among the oldest settlements in Central Asia. Osh was known as early as the 8th century as a center for silk production along the Silk Road. The famous trading route crossed Alay Mountains to reach Kashgar to the east.".....http://en.wikipedia.org/wiki/Osh 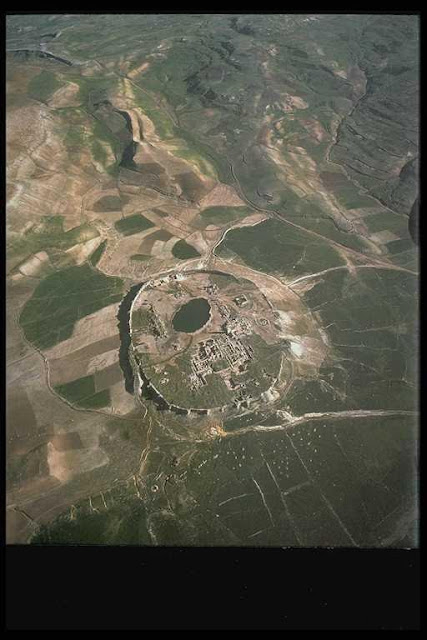 "Sulaiman-Too meaning Solomon's Mountain is a 1000 metres high rocky spur of Alay mountain range. It is surrounded by Kyrgyzstan's second largest city Osh and was a major place of pilgrimage in the Central Asia for Muslims as well as pre-Muslims. The mount located in the vast plains of the Fergana Valley, acted as a beacon for caravans on the Silk Route and was revered as a sacred mountain. Some historians are of the opinion that the peak of the mount is tower and the main signpost of the Silk Road described by the Ptolemeus. Its five peaks and slopes contain numerous ancient places of worship and caves with petroglyphs ......The mount contains several caves which are also revered and the locals believe that a little cave where water drips from the roof, are the tears of Sulaiman. They come here to pray from relief from illnesses etc. It is also revered by pregnant women who think that it will give healthy and wise children like the King Solomon.".....http://armchairtravelogue.blogspot.com/2009/08/sulaiman-too-sacred-mountain-of.html

"Sulaiman was an ancient Israeli king who is written about in the Old Testament. Sulaiman-Too Sacred Mountain is located in the city of Osh in southwest Kyrgyzstan on the border with Uzbekistan and has been revered as a holy mountain for 1,500 years. It was also an important landmark for people travelling on the Silk Road. This mountain has five peaks with ancient places of worship, mosques, and caves containing rock paintings of people, animals, and geometric patterns. Seventeen places of worship are currently in use, including two mosques that were reconstructed in the 16th century."......http://world_heritage.jaxa.jp/en/search/detail.php?froml=list&id=66

Sulaiman Mountains in Afghanistan......Kesay: Pashtoons refer to the Sulaiman mountain as the Kesay Ghar (mountain)...Roh: means mountains, referred to the Sulaiman Mountains in Dera Ghazi Khan and Rajanpur districts.......The Sulaiman Mountains (Pashto: د سليمان غر da Sulaimān Ğar‎; Balochi/Urdu/Persian: کوه سليمان Koh-e Sulaimān), or the Kesai Mountains (Pashto: د كسي غرونه‎), are a major geological feature of eastern and southeastern Afghanistan (Zabul, most of Loya Paktia and northeastern Kandahar), South Waziristan, most of the northern Balochistan province and some of the southwestern Punjab province of Pakistan. The Sulaiman Mountains form the eastern edge of the Iranian plateau where the Indus River separates it from the Indian Subcontinent. Bordering the Sulaiman Range to the north are the arid highlands of the Hindu Kush, where more than 50 percent of the lands lie above 2,000 meters......In Balochistan, the most famous peaks of the Sulaiman Mountains are Takht-e-Sulaiman (3,487 meters), Taunsa Sharif, the Khilafat Hills (3,475 meters) in Ziarat, Kesai Ghar (3,444 meters) near Zhob and Zarghun Ghar (3,578 meters) near Quetta."......https://en.wikipedia.org/wiki/Sulaiman_Mountains

"In an Afghan legend, one of the highest peaks of the Takht-i Sulaiman ("Throne of Solomon"), 3,382 metres (11,096 ft) high, is associated with Prophet Solomon. Ibn Battuta names it Koh-i Sulaiman. It is related that Prophet Solomon climbed this mountain and looked out over the land of South Asia, which was then covered with darkness, but he turned back without descending into this new frontier, and left only the mountain which is named after him (from Ibn Battuta). According to another legend, Noah's Ark alighted in the Takht-i Sulaiman after the Deluge.".....https://en.wikipedia.org/wiki/Sulaiman_Mountains