"Archaeologists and historians suggest that humans were living in Afghanistan at least 50,000 years ago, and that farming communities of the region were among the earliest in the world".....Afghanistan: VII. History (Archived)". John Ford Shroder. University of Nebraska. 2009. 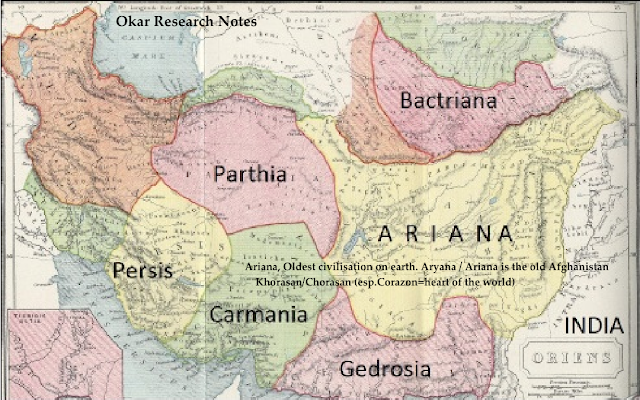 Ariana, the place of Dari speaking people (AFG) .. Oldest civilisation on earth. Aryana / Ariana is the old Afghanistan or Khorasan/Chorasan (esp.Corazon=heart of the world).

"Excavation of prehistoric sites suggests that early humans lived in northern Afghanistan at least 50,000 years ago and that farming communities in Afghanistan were among the earliest in the world. After 2000 BC successive waves of people from Central Asia moved into the area. Since many of these settlers were Aryans (speakers of the parent language of the Indo-European languages), the area was called Aryana, or Land of the Aryans....Ariana, the Latinized form of the Ancient Greek Αρειανή Arianē, (inhabitants: Ariani (Ancient Greek: Αρειανοί Arianoi), was a general geographical term used by Greek and Roman authors of the ancient period for a district of wide extent between Central Asia and the Indus River,comprehending the eastern provinces of the Achaemenid Empire that covered entire modern-day Afghanistan, east and southeast of Iran, Tajikistan, and Turkmenistan."....

Urbanized culture has existed in the land between 3000 and 2000 BC,,,,http://en.wikipedia.org/wiki/Pre-Islamic_period_of_Afghanistan#cite_ref-JFS_1-0

"Early man in Afghanistan lived on river terraces and inhabited caves and rock shelters. Countless stone tools scattered about the countryside attest to this and each year archaeological excavations add substance to the picture of life in the Afghan area during the distant past......Lower Palaeolithic tools made more than 100,000 years ago were collected from terraces to the east of the perennial brackish lake called Dasht-i-Nawur west of Ghazni (L. Dupree, 1974). They consist mainly of quartzite tools of the following types: large flake cores, cleavers, side scrapers, choppers, adzes, hand axes and "proto-hand axes". These are the first Lower Palaeolithic tools to be identified in Afghanistan.".....http://www.afghanistanforums.com/index.php?topic=455.0

""Neanderthaloids possibly developed out of the East Asian strains of Java and Peking Man, and, during the lush Third Interglacial Period, spread along the foothills of the Eurasian mountains into Europe," excavated hundreds of stone tools of classic Middle Palaeolithic types from a rock shelter called Darra-i-Kur near the village of Baba Darwesh not far from Kishm, in Badakhshan. (L. Dupree, director) These represent the first tools of this early period to be scientifically excavated in Afghanistan. They date ca. 50,000 years ago.".....http://www.afghanistanforums.com/index.php?topic=455.0

"......additional evidence in the foothills near Gurziwan, southeast of Maimana. The tools from Ghar-i-Gusfand Mordeh (Cave of the Dead Sheep) may be even older than those from Darra-i-Kur. ...... Middle Palaeolithic tool types closely resembling those found at Darra-i-Kur were also recovered from terraces north of Dasht-i-Nawur. They in-clude Levallois flakes, side and round scrapers, points and possible burins.".....http://www.afghanistanforums.com/index.php?topic=455.0

"As man ceased to be an animal chasing other animals, he began to manufacture a greater variety of more sophisticated stone tools. Upper Palaeolithic sites in Afghanistan dating from about 34,000 to 12,000 years ago illustrate this. Kara Kamar, a rock shelter 23 kin; 14 mi. north of Samangan, the first Stone Age site to be scientifically excavated in Afghanistan, produced tools dating ca. 30,000 B.c. (C. Coon, 1954)."......http://www.afghanistanforums.com/index.php?topic=455.0

"Evidence of Upper Palaeolithic man was subsequently expanded when other American archaeologists excavated over 20,000 stone tools from several rock shelters beside the Balkh River at Aq Kupruk in the hills some 120 kin; 75 mi. south of Balkh (Dupree, 1962, 1965). The tools in this assemblage are so beautifully worked that one eminent specialist in palaeolithic technology has dubbed the tool makers of Aq Kupruk "the Michelangelos of the Upper Palaeolithic." They represent a cultural phase which endured for about 5000 years at Aq Kupruk, from ca. 20,000 to 15,000 years ago, during which someone, a man or a woman, carved the face of a man, or is it a woman?, on a small limestone pebble. This work of art is one of the earliest representations of man by man.".....http://www.afghanistanforums.com/index.php?topic=455.0

"North of Balkh, Russian archaeologists found an extremely rich concentration of high quality Mesolithic implements on the sand dunes south of the Amu Darya (classical Oxus River) dating Ca. 10,000 B.C. (A. Vinegradov, 1969-present). Here the basic in-dustry is microlithic with geometrics. From dunes north of Khulm, a French archaeologist collected flints including microburins char-acteristic of the Epipalaeolithic, Ca. 7-6500 B.C. (Ph. Gouin, 1968).....The great revolution which launched man onto the path of 'civilization' took place dur-ing the Neolithic period when he learned to plant crops and domesticate animals and thus began to control his food supply."......http://www.afghanistanforums.com/index.php?topic=455.0

Afghanistan was inhabited by the Aryan tribes and controlled by the Medes until about 500 BC when Darius the Great (Darius I) marched with his Persian army to make it part of the Achaemenid Empire. In 330 BC, Alexander the Great of Macedonia invaded the land after defeating Darius III of Persia in the Battle of Gaugamela. Much of Afghanistan became part of the Seleucid Empire followed by the Greco-Bactrian Kingdom. The area south of the Hindu Kush had been given by Seleucus I Nicator to Chandragupta Maurya and became part of the Maurya Empire. The land was inhabited by various tribes and ruled by many different kingdoms for the next two millenniums. Before the arrival of Islam in the 7th century, there were a number of religions practiced in ancient Afghanistan, including Zoroastrianism, 'Paganism', Buddhism and Hinduism.

Due to the similarity between early Avestan and Sanskrit (and other related early Indo-European languages such as Latin and Ancient Greek), it is believed that the split between the old Persians and Indo-Aryan tribes had taken place at least by 1000 BC. There are striking similarities between the Old Afghan language of Avestan and Sanskrit, which may support the notion that the split was contemporary with the Indo-Aryans living in Afghanistan at a very early stage.

"Etymology of Ariana......The Greek term Arianē (Latin: Ariana) is based upon Sanskrit Āryana- (Avestan: Airiiana-, esp. in Airiianəm vaēǰō, the name of the Afghan peoples’ mother country). Ariana was named after its one of provinces Aria, a region enclosed chiefly the valley of the Hari River which is modern day's Herat Province of Afghanistan. The modern name Iran represents the ancient name Ariana which has been used since 1959, and does not impose that Iran is the Ariana itself., - a word itself of Avestan origin.; a view which is borne out by the traditions of the country preserved in the Muslim writers of the ninth and tenth centuries."......http://en.wikipedia.org/wiki/Ariana

"The names Ariana and Aria, and many other ancient titles of which Aria is a component element, are connected with the Sanskrit term Arya-, the Avestan term Airya-, and the Old Persian term Ariya- , a self designation of the peoples of Ancient India and Ancient Afghanistan, meaning "noble", "excellent" and "honourable"...http://en.wikipedia.org/wiki/Ariana

" the borders of Ariana were defined by the Indus River in the east, the sea in the south, a line from Carmania to the Caspian Gates in the west, and the so-called Taurus Mountains in the north. This large region included almost all of the countries east of Media and ancient Persia, including south of the great mountain ranges up to the deserts of Gedrosia and Carmania, i.e. the provinces of Carmania, Gedrosia, Drangiana, Arachosia, Aria, the Paropamisadae; also Bactria was reckoned to Ariana and was called "the ornament of Ariana as a whole" by Apollodorus of Artemita."......http://en.wikipedia.org/wiki/Ariana