Bactra—the Greek name under which pre-Islamic Balkh was known—encapsulated Bronze Age settlements around 2,000 BC when its ancient water systems were built.

"A kareez (کاریز) (also spelt karez / kariz and later called qanat in Arabic) is a combination below and above ground channel system used to bring water to a settlement or fields from a natural source, say an aquifer, mountain spring or lake. Many of the kareez / qanats are ancient and their history is intertwined with the history of Aryan lands. Importantly, the system was sustainable and did not exhaust underground aquifers. ".....http://www.heritageinstitute.com/zoroastrianism/kareez/ 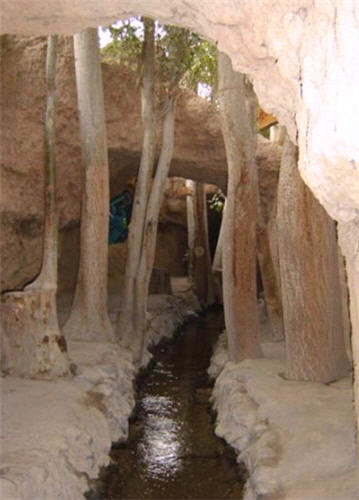 Some of the earliest known kareez have been found in north-eastern Iran and ancient Persia.

"A qanāt (Arabic: قناة‎, Persian: قنات) is one of a series of well-like vertical shafts, connected by gently sloping tunnels. Qanāts create a reliable supply of water for human settlements and irrigation in hot, arid, and semi-arid climates.....The qanat technology is known to have been developed by the Persian people sometime in the early 1st millennium BC and spread from there slowly westward and eastward.".....

"The kareez are difficult, laborious and time consuming to build and maintain. However, without them normal life in the more arid regions of the Aryan lands and the later Persian empire, including Egypt, would have been untenable. In these lands, as well as the Aryan's Turkic neighbours in Kazakhstan and the Tarim river basin in what is today the far western Chinese Uygur province of Xinjiang - the kareez was, and in many cases still is, the principal method of water supply and distribution. After the Arab conquests of the Aryan lands, the Arabs called the system a 'qanat'. However, the system continued to be called kareez in the eastern Aryan lands including the neighbouring eastern Turkic lands. ....".....http://www.heritageinstitute.com/zoroastrianism/kareez/

It was a province of the Achaemenid Empire (sixth century BC), the capital of the Hellenistic kingdom of Bactria and a part of the Kushan Empire that flourished in the first to the third centuries AD.

"The 16th century Tajik writer Makhmud Zainaddin Wasifi, wrote in his book Amazing Events, that in the Central Asian oasis town of Sauran (today in southern Kazakhstan), two kareez lines made possible a chahar-bagh whose beauty had never been "seen neither on land neither on sea....There is considerable evidence of an ancient above ground water irrigation system in Central Asia. Author Henry Gubler believes that the transition to the use of an underground channel system may have taken place around 800 BCE "......http://www.heritageinstitute.com/zoroastrianism/kareez/

The first surviving textual mention of ancient Bactria is in the Vendidad section of the Avesta, the Zoroastrian Holy Book. Bactria (Baxtri) is mentioned in the trilingual inscription of the Emperor Darius I (r. 522-486 BC) at Bisutun and Persepolis as one of the Achaemenid satrapies (provinces). According to varying traditions, Balkh was founded by the mythical Iranian kings Gusthasp, his father Luhrasp, or the first man, Gayumarth. The Zoroastrian Prophet Zoroaster is rumoured to have died in Balkh.