"....the khvarnah of the fravashis......A fravashi (Avestan fravaši; Middle Persian fravard, fravahr, fravash, fravaksh) is the guardian spirit mentioned in the Avesta of an individual, who sends out the 'urvan' into the material world ....On the morning of the fourth day after death, the urvan returns to its fravashi, where its experiences in the material world are collected..... 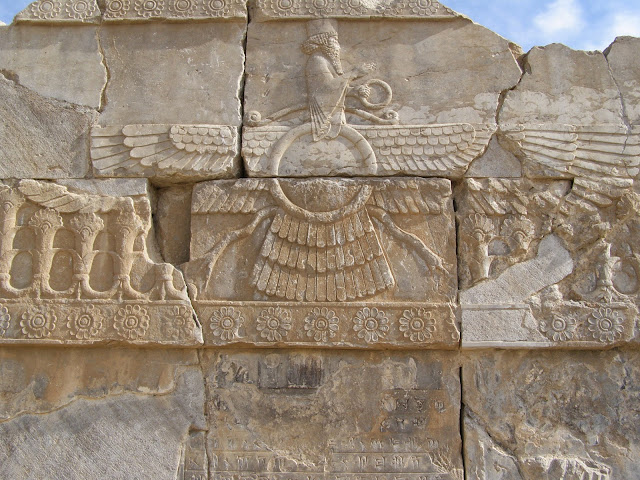 Stone carved Faravahar in Persepolis......the ceremonial capital of the Achaemenid Empire (ca. 550–330 BC).

Beeks shows h>x type progressions as early as Gathic as in GAv. hwar/xwar "sun," and velar fricatives do appear in Young Avestan....http://www.fas.harvard.edu/~iranian/Avesta/a07_lesson4.pdf

"...hvarena - "glory" or "divine lustre" - which marked the Persian kings, may have been imported with Mithraism. .......The Great King of Persia is often said to have been surrounded by a radiant nimbus of kingly glory, the Hvarena (also rendered Khvarnah or farnah).....Azi- Dahaka wanted to rob the light of the hvarena (heaven).....From Persia came the doctrine of the halo of the divine king (hvarena) ......Boyce, Mary (2001), "Fravaši", Encyclopedia Iranica 10

"....from Persepolis and Susa. By the time Darius decides to erect palaces there, he is in full control of his empire, and .....was to acknowledge the importance of the khvarnah, this auspicious fortune that Iranians have always considered as a necessary attribute of kingship. According to an ancient myth, the legendary king Jamshid (Yima)lost his kingship when he lost the khvarnah, and thereafter every Iranian king strove to show that he had become the recipient of the khvarnah and hadn’t lost it. For his palaces therefore, Darius chose a winged-sphere as the symbol of the khvarnah, and placed a sphinx on each side as its guardians."....http://www.soudavar.com