A fire puja is an offering of a large number of specific substances tossed into a fire during an elaborate ritual....... 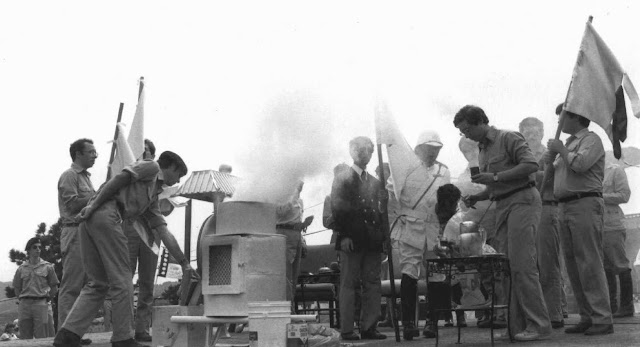 "Three kinds of fire pujas.....The fire pujas, there are three major different fire-related pujas. One is called SANG, another is called SUR, and another one is JIN-SEIG. So. SANG, SUR, JIN-SEIG, three kinds of fire pujas. AND inside of each, there are many different kinds, but mainly there are three......The major principle of fire pujas is offering. You put the food and whatever ingredients in the fire. Fire burns it, so fire eats it. Then, it is totally consumed, so that is way of offering......In the SANG, you are offering the smoke, in the SUR, you are offering the smell. And in the JIN-SEIG, you are just offering fire itself, flame itself, and burning itself."......Fire Pujas: Smoke Offering, Smell Offering, & Fire Offering---The teaching of H.E. The 12th Tai Situ Rinpoche 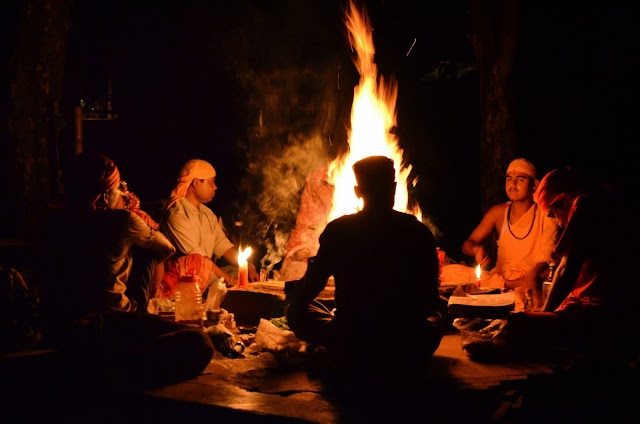 "A homa ceremony involves a priest and a host(s) and guests sitting before the kunda while mantras are recited and various items such as ghee, rice, herbs, foodstuffs, and other items are placed into the fire. Through the mantras, fire, is asked to take the prayers and consumed offerings (hence the meaning of hu "to eat") to the intended Divinity. For example, if one wanted to perform a havan for increased health, one could direct the offerings to the sun Deity, Surya. If one wanted rain, one might direct their prayers and offerings to the rain Deity, Indra. If one wanted to increase luck and general prosperity one could direct Agni to take the offerings to Ganesha and Lakshmi, two Divinities in charge of luck and fortune. ".....http://www.sanskrit.org/www/Hindu%20Primer/havan.html 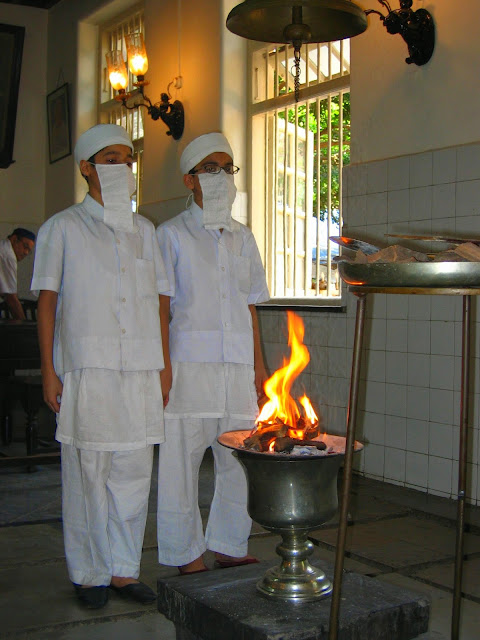 " Sadeh and Chaharshanbe Suri are both fire-related festivals celebrated throughout Greater Iran and date back to when Zoroastrianism was still the predominant religion of the region....Sadeh is a mid winter festival, celebrated with grandeur and magnificence in ancient Iran. It was a festivity to honor fire.....originated with King Hushang, the 2nd king of the mythological Peshdadian dynasty.....There is a cave in a mountain near Yazd, called Chak-Chak Fire Temple. Every year some special ceremonies are held in this place during the Sadeh Feast. It is believed that the last Zoroastrian princess took shelter there in 640 AD when the Muslims expanded their power to the east.....

"Aarti, Arti, arathi, or Arati is a Hindu ritual in which light from wicks soaked in ghee (purified butter) or camphor is offered to one or more deities. It may be said to have descended from the Vedic concept of fire rituals, or homa. The word may also refer to the traditional Hindu devotional song that is sung in the ritual of the same name.....Aarti is generally performed twice or three times daily. For example, in the morning and in the evening, and at the end of a puja or bhajan session....A puja can be performed for anyone the performer considers a god, from an idol of Vishnu to a holy tree. The worship consists of offering something to the object of worship, such as flowers or food, and possibly lighting a candle or incense...... the offering of food and drink to one's personal murtis of god and guru.".....http://www.saranam.com/cms/13/Hindu-Rituals.htm

"The Fire Ritual: Havan/Homa .....A havan or homa is similar to a puja in the sense that both are common modes of worship and both are symbolic forms of communication. The words havan and homa each derive from the Sanskrit root hu, meaning to offer, to present and to eat. Generally, the word havan is heard in North India and homa is used in South India....A havan is a religious ceremony performed in temples and in homes that involves worship through the use of a sacred fire. The use of fire as a means of worship is the most ancient of all rites, going back to the earliest Vedic times. This fire ritual is described in elaborate detail in the Brahmanas. From the earliest of Vedic times and even to present day, fire (Agni) was viewed as the chief of the Gods. In fact, the first verse of the Rig Veda is addressed to Agni, the fire God. "I praise Agni, the chosen Priest, God, minister of sacrifice... .".....A Hindu Primer by Shukavak N. Dasa....2007 Sanskrit Religions Institute

"Archaeologically, the earliest evidence for Indo-Iranian fire worship is found at the transition from the Sintashta-Petrovka to the Fedorovo culture around 1500 BC, together with first evidence of cremation. While cremation became ubiquitous in Hinduism, it came to be disavowed in Zoroastrianism. However, even earlier evidences of vedic fire altars have been found at the Indus Valley sites of Kalibangan and Lothal, giving rise to speculations towards earlier assumed the geographical location of the early Indo-Iranians.".....

"The importance of fire in Indo-European (IE) religion is ensured by the IE languages, through such cognates as the Hittite hashsha, "hearth, fireplace," Latin ara, "altar," and Sanskrit asa, "ashes" (Polome, 1982, p. 392). An altar, to the IEs, was a fire, and a fire might be used as an altar. The IEs did not see a fire as a single thing, however, distinguishing several types. ...under Vedic law, new territory was legally incorporated with the construction of an altar to the fire god Agni (Eliade, p. 30). A similar law was observed in Iran as late as the 3rd century CE (Varenne, p. 26).....famous fire, that of the Vestal Virgins at Rome. In their round temple (the other temples in Rome were rectangular) burned a fire that was not allowed to go out. It was tended by virgins.....Thrace. In the royal palace of 3rd-4th century BCE Seuthopolis was a raised main hall with a raised hearth in its center. The hearth was square, with a circular depression in it. That this was equivalent to the fires of Hestia and Vesta....The Vedic ritualists prescribe three fires. The primary one is the garha-patya, the "fire of the master of the house." This is a round fire, lit from the household fire....To its east is the ahavaniya, the "fire of offering." This fire is the connection between the gods and the earth, representing the presence of Agni, god of fire and priest of the gods. The vedi, a cushion of sacred grass for the gods to sit on, is next to it. This fire is square.....The third fire is the dakshinagni, the "southern fire." Made on the southern edge of the sacrificial area, its purpose is to guard against evil spirits (identified with the dead) which might come from this direction, in Vedic cosmology the most dangerous. It is fan-shaped. (Dumezil, pp. 312-14; Smith, pp. 82-84.)".....The Proto-Indo-European Hearth by Ceisiwr Serith 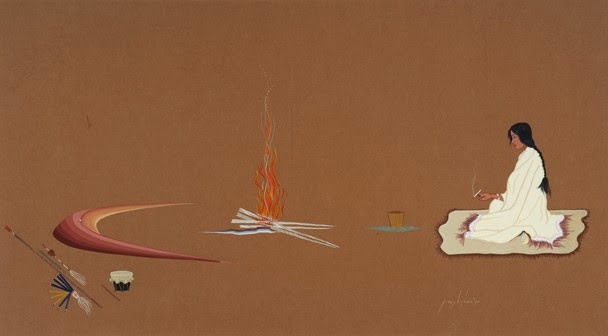 Water Ceremony (1970), Franklin Fireshaker, Ponca, Watercolor on Board....Franklin Fireshaker encourages Indian artists to preserve the culture, history, and legends of their tribes in their paintings....Philbrook Museum of Art, Tulsa, Oklahoma