"According to early Hinayana biographies of the Buddha, such as the Sarvastivada text The Sutra of Extensive Play (Skt. Lalitavistara Sutra), Tapas­su and Bhallika, two merchant broth­ers from Bac­tria ( Balkh today in Afghanistan), became the first disciples to receive layman’s vows. This occurred eight weeks after Shakyamuni’s enlightenment, traditionally ascribed to 537 BCE. Bhallika later became a monk and built a monas­tery near his home city, Balkh, near present-day Mazar-i-Sharif. He brought with him eight hairs of the Buddha as relics, for which he built a stupa monument.....In 349 BCE, several years after the Second Buddhist Coun­cil, the Mahasanghika tradition of Hinayana split off from the Theravada. Many Mahasanghikas moved to Gandhara. At Hadda, the main city on the Afghan side, near present-day Jalalabad, they eventually founded Nagara Vihara Monastery, bringing with them a skull relic of the Buddha......A Theravada elder, Sambhuta Sanavasi, soon followed and tried to establish his trad­ition in Kapisha. He was unsuc­cessful, and Maha­sanghika took root as the main Buddhist tradition of Afghanistan......Eventually, the Mahasanghikas split into five sub-schools. The main one in Afganistan was Lokottaravada, which later established itself in the Bamiyan Valley in the Hindu Kush Mountains. There, some time between the third and fifth centuries AD, its followers built the world’s largest standing Buddha statue 57 meters high, carved out of living rock, in keeping with their assertion of Buddha as a transcendent, superhuman figure. The Taliban destroyed the colossus in 2001 CE"......http://watanafghanistan.tumblr.com/post/13845499851/historical-sketch-of-buddhism

"The Lalitavistara Sutra is a Mahayana Buddhist sutra of the Vaipulya, or extensive discourse, class that describes the life story (lila or sports) of Gautama Buddha, whose teachings resulted in the founding of Buddhism. It is a compilation of various works by no single author and includes some material from the Sarvastivada school. The scholar P. L. Vaidya dates the finished Sanskrit text to the 3rd century"....http://en.wikipedia.org/wiki/Lalitavistara_Sutra

"Haḍḍa is a Greco-Buddhist archeological site located in the ancient region of Gandhara, near the Khyber Pass, ten kilometers south of the city of Jalalabad in today's eastern Afghanistan.....Some 23,000 Greco-Buddhist sculptures, both clay and plaster, were excavated in Haḍḍa during the 1930s and the 1970s. The findings combine elements of Buddhism and Hellenism in an almost perfect Hellenistic style..... the Haḍḍa sculptures are usually dated to the 1st century AD or later (i.e. one or two centuries afterward)..... "the area might be the cradle of incipient Buddhist sculpture in Indo-Greek style".....John Boardman, The Diffusion of Classical Art in Antiquity 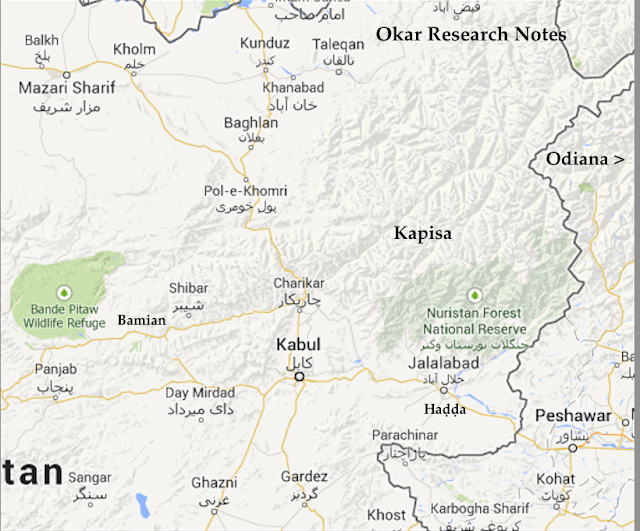 Lokottaravada.....The Śāriputraparipṛcchā and the Samayabhedoparacanacakra both suggest that the Lokottaravāda had their origins with the Ekavyāvahārikas and the Gokulikas. While the Mahāsāṃghikas initially flourished in the region around Magadha, the Lokottaravādins are known to have flourished in the Northwest.....The 6th century CE Indian monk Paramārtha wrote that 200 years after the parinirvāṇa of the Buddha, much of the Mahāsāṃghika school moved north of Rājagṛha, and were divided over whether the Mahāyāna teachings should be incorporated formally into their Tripiṭaka. According to this account, they split into three groups based upon the relative manner and degree to which they accepted the authority of these Mahāyāna texts. According to Paramārtha, the Lokottaravādins accepted the Mahāyāna sūtras as the words of the Buddha (buddhavacana)."....Walser, Joseph. Nāgārjuna in Context: Mahāyāna Buddhism and Early Indian Culture. 2005