"...Balika-Bhallika was the name of the norheasternmost town of the Archaemenid empire in the day of the Buddha. In addition, the word Trapussa means meditator in Sanskrit--he might be a magi or Zoroastrian priest/meditator. There's a lot of Zoroastrian meditatiors who worshipped fire and light practicing in the Baranasi forests at that time . After meeting Trapussa and Bhallika, The Buddha journeyed to Rajakaha/Maghatha and on the way gave Desna/sermons to 1000 fire worshiping meditators around Baranasi forests to become arahats and ordained as bhikkhus/monks......The Buddha in 6 Auras by the enlightenment and 45 days jahn certainly attracted and amazed the Zoroastrains who worshipped fire and light.(It said in the Scripture that the Buddha was in 6-Aura at the time of enlightenment, suprapower exhibit at Sangus, and parinibban (passing away). Buddhism went well with Zoroastrianism on this point. Paintings and images of Buddha were with auras around him and sometimes called Buddha Mazda."......Metta from Misk 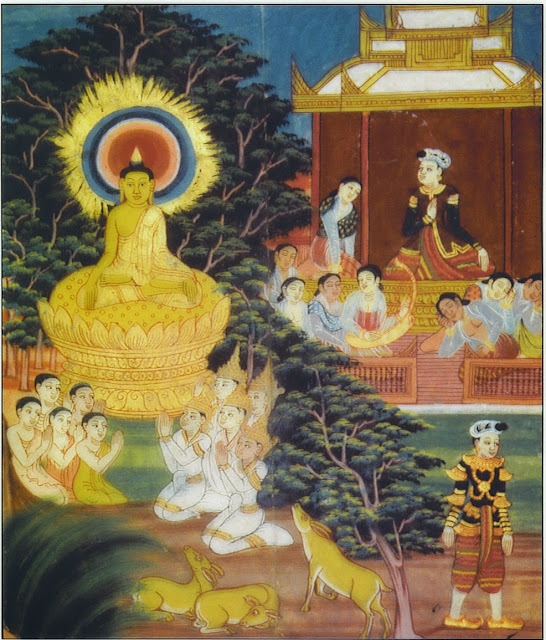 "......six colours of the aura that are believed to have shone around the head of the Buddha after his Enlightenment......
Blue: Compassion
Yellow: The Middle Path
Red : Blessings
White: Purity
Orange: Wisdom
The first five stripes of the flag are in five colours. The sixth colour is a conglomeration of the other five, but for the design, it has been separated into its constituent colours......http://www.buddhanet.net/e-learning/buddhism/pbs2_unit07a.htm

"Zoroastrianism (as well as later Manicheism) may still have influenced elements of Buddhism, especially in terms of light symbolism."....http://en.wikipedia.org/wiki/Zoroastrianism

"In the Vinaya, the Fire Sermon is the third discourse delivered by the Buddha (after the Dhammacakkapavattana Sutta and the Anattalakkhana Sutta), several months after his enlightenment, on top of the Gayasisa Hill, near Gaya, India. He delivered it to a thousand newly converted ascetics who formerly practiced a sacred fire ritual (Pali: aggihutta; Skt.: agnihotra).....The 5th-century CE post-canonical Pali commentary, Sāratthappakāsini (Spk.), attributed to Buddhaghosa, draws a direct connection between the ascetics' prior practices and this discourse's main rhetorical device: Having led the thousand bhikkhus monks to Gayā's Head, the Blessed One reflected, 'What kind of Dhamma talk would be suitable for them?' He then realized, 'In the past they worshipped the fire morning and evening. I will teach them that the twelve sense bases are burning and blazing. In this way they will be able to attain arahantship."......Bodhgaya News (n.d.), "Pali Canon Online Database," online search engine of Sri Lanka Tripitaka Project's (SLTP) Pali Canon, maintained by Dr. Peter Friedlander, formerly of La Trobe University

Buddha preached his first sermons in Benares when he was thirty-five. ...The Fire Sermon was given by Buddha to 1,000 priests..... in the woods of Uravela (Buddha Gaya, south of Patua), on the river Nerangara (Phalyn).....The Buddha achieved Enlightenment at Uravela (presently Bodh Gaya) . . . [after several months failing to find other worthy students] he set off on foot.....Uravela Kassapa's hut ......"

"....And, monks, I did not find that dhamma sufficient ; unsatisfied I went away from there. Then, monks, searching for something good, seeking the peerless way of desirable peace, I passed through the land of Magadha from place to place, and came near to the town of Uravela. There I saw a well placed plot of ground ; a serene dense grove, a clear flowing stream, suitable for bathing, refreshing, all about were villages in which to go for alms. Perceiving this, monks, it occurred to me . . . ' Here is everything necessary for the struggle of a worthy man.' ...... And there, monks, as all was suitable for the struggle, I settled down.".....THE LIFE OF GOTAMA, THE BUDDHA....(Compiled exclusively from the Pali Canon) .....E. H. BREWSTER......LONDON .....1926

... the Jatila Uruvela Kassapa .....Jatila.-A class of ascetics, so called on account of their matted hair....In Buddhist tradition, Kassapa (Pāli) is the name of a Buddha, the third of the five Buddhas of the present kalpa (the Bhaddakappa or 'Fortunate Aeon'), and the sixth of the six Buddhas prior to the historical Buddha mentioned in the earlier parts of the Pali Canon ..... In the Buddhist texts in Sanskrit, this Buddha is known as Kāśyapa."....http://en.wikipedia.org/wiki/Kassapa_Buddha

"....Conversion of Kassapa, the Fire-Worshiper....At that time there lived in Uruvela the Jatilas, Brahman hermits with matted-hair, worshiping the fire and keeping a fire-dragon; and Kassapa was their chief. Kassapa was renowned throughout all India, and his name was honored as one of the wisest men on earth and an authority on religion. And the Blessed One went to Kassapa of Uruvela the Jatila, and said: "Let me stay a night in the room where you keep your sacred fire.".....http://www.theravada-dhamma.org/pdf/Anagarika_Tevijjo-Fire_Sermon.pdf