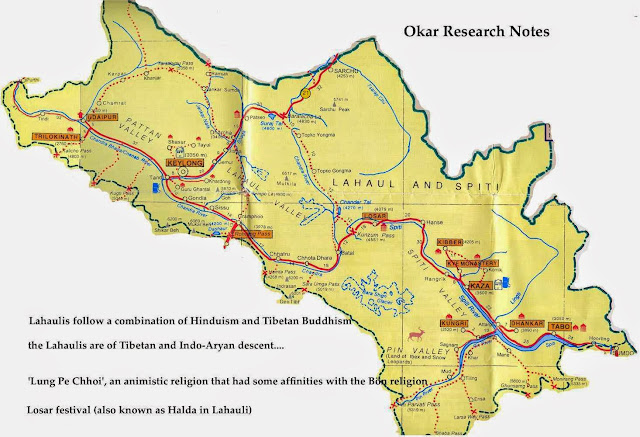 "The Himalayan district of Lahaul–Spiti in the Indian state of Himachal Pradesh is one of the last refuges for Tibetan Buddhism in India.....the Dalai Lama who has been frequently visiting these areas and holding Kalachakra discourses for the people of this Himalayan district.....a black stone image of the Hindu goddess Kali, locally known as Vajreshwari Devi....Lahaul has the particularity to have two temples holy to both Buddhists and Hindus. The Mrikula Devi temple in Udaipur village is dedicated to the goddess Kali. This wooden temple was built in the 11th century.....The other temple is the 8th century Trilokinath temple across the Chandrabhaga river. It has a six-armed deity that is said to have been installed by Padmasambhava himself. It is worshipped as Shiva by Hindus and Avalokiteshwara by Buddhists......The most sacred spaces in a gompa are the lha-khang (sacred shrine)....India’s oldest functioning monastery is Tabo gompa, some 47 kms from Kaza. This monastery is an architectural illustration of the concept of the mandala. The monastery celebrated its 1,000th anniversary in 1996 when the Dalai Lama performed the Kalachakra initiation in Tabo.....This gompa has been enlisted as one of the World Endangered Monument.....http://library.thinkquest.org/10131/lahaul_history.html 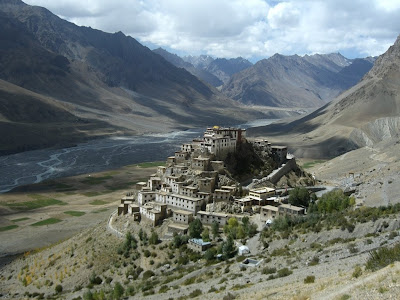 "..... the Lahaulis are of Tibetan and Indo-Aryan descent.... Fairer skin and hazel-colored eyes are commonly seen among the Lahaulis....Among the Lahaulis, the extended family system is common, evolved from the polyandric system of the past......http://library.thinkquest.org/10131/lahaul_history.html

"Before the spread of Tibetan Buddhism and Hinduism, the people were adherents of the religion 'Lung Pe Chhoi', an animistic religion that had some affinities with the Bön religion of Tibet. While the religion flourished, sacrifices were regularly offered up to the 'Iha', a term that refers to spirits residing in the natural world, notably in the old pencil-cedar trees, rocks and caves. Vestiges of the Lung Pe Chhoi religion can be seen in the behaviour of the Lamas, who are believed to possess certain supernatural powers. The Losar festival (also known as Halda in Lahauli) is celebrated between the months of January and February. The date of celebration is decided by the Lamas. It has the same significance as the Diwali festival of Hinduism, but is celebrated in a Tibetan fashion"......https://en.wikipedia.org/wiki/Lahaul_and_Spiti_district

"....the Lahaulis follow a combination of Hinduism and Tibetan Buddhism..... Lahoul has temples such as Trilokinath temple, where pilgrims worship a certain god in different manifestations, notably in the form of Shiva and Avalokiteshvara where Udaipur is a puritan temple. This bas-relief, of marble, depicts the Buddhist deity Avalokiteshvara (the embodiment of the Buddha's compassion) in a stylized seated position; Hindu devotees take it to be Shiva Nataraj, Shiva dancing. This image appears to be of sixteenth century Chamba craftsmanship. It was created to replace the original black stone image of the deity.... It appears to be of 12th century Kashmiri provenance....Raja Ghepan, one of the major deities is greatly workshipped by almost all Lahauli.".....https://en.wikipedia.org/wiki/Lahaul_and_Spiti_district

"In ancient Buddhist scripures, 'Padma thangyiang' and 'Mam-kambum' there is mention of a country named Khasa or Hasha to the south of Ladakh and Zangskar. It is possible also that 'Garzha' may be corruption of Khasa or Hasha. Between the 6th century B.C. and the 5th century A.D., the Saka and Khasa tribes, after having been driven out from Central Asia by the Huns, crossed over into India. many of these settled down in the valleys of Mid-Himalayas between Garhwal and Ladakh. This is borne out by the numerous remains of their graves found in these valleys. There is a nullah near Keylong known as Shaks, which seems to have taken its name after the Saka tribe settled in the Bhaga valley.".....http://hplahaulspiti.nic.in/history.htm

"It is believed that the power of the feudals of Lahaul increased after the central power in India declined around the 7th-8th centuries AD.....Chamba was quite powerful around the middle of the 7th century. It controlled the adjoining areas of Lahaul, including the Pattan Valley up to the shrine of Triloknath or even till Tandi."....http://library.thinkquest.org/10131/lahaul_history.html

".....Lung pe Chhoi was the ancient religion of Lahaul before the advent of Buddhism. According to Lyall, "when it was flourishing, many sacrifices seem to have been regularly offered up to certain 'Iha' .....gods of spirits residing in or near old pencil-cedar trees, rocks, caves, etc.......The people of Lahaul and Spiti (both the Hindus and the Buddhists) have been superstitious almost since the dawn of civilization. They believe in witches and evil spirits....The Lung pe Chhoi religion gave way to Buddhism and Hinduism sometime in the 8th or 9th century.....Sir J. B. Lyall's work. Lahul has been partly Hinduized, but Spiti is still Buddhist, and looks to Lhasa and other centres in Tibet for its culture.....".....http://library.thinkquest.org/10131/lahaul_lungpechoi.html

Superstitions and Beliefs..... The people of Lahaul and Spiti (both the Hindus and the Buddhists) have been superstitious almost since the dawn of civilization. They believe in witches and evil spirits, before whom animal sacrifices are made even now. Lamas or Bhats are consulted in case of illness, diseases or natural calamities such as droughts or earthquakes. It is believed that the lamas have special powers of curing illnesses. A couple of the superstitions are listed below. When one is leaving for some important work, the sight of a dog, cat or empty vessel is considered inauspicious. On the other hand a bucketful of water seen at this time is believed to bring good luck. A person overpowered by Vara-nag and Gelphan speaks the Kulu dialect; that by Bhajeswari devi the Bhot dialect and that by Shiva the Gaddi dialect. 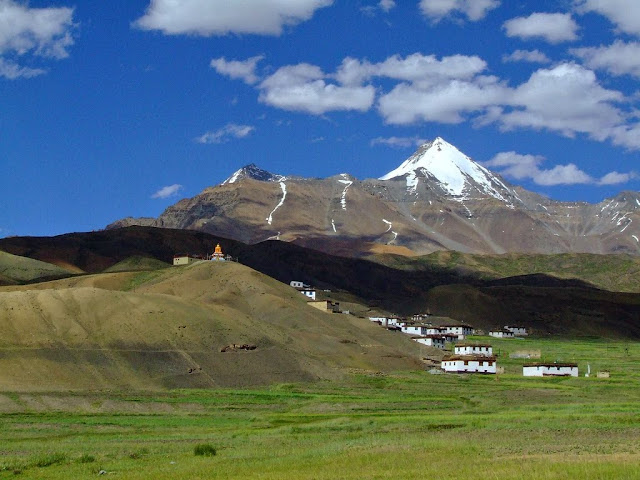 "Khandro Thrinlay Chodon was born in Lahoul, which is known in the dharma texts as the 'Land of the Dakinis'.....a valley called Lahoul (also known as Garsha in the Tibetan texts).....“The word ‘Khachodling’ holds a deep spiritual meaning for me. Simply stated it is the place where the heart essence of wisdom, known as the feminine principle in Buddhism, is nourished and respected. Compassionate Action flows unceasingly from this source. Literally translated from the Tibetan, this is a ‘land of the blissful dakinis’.....http://www.khachodling.org/