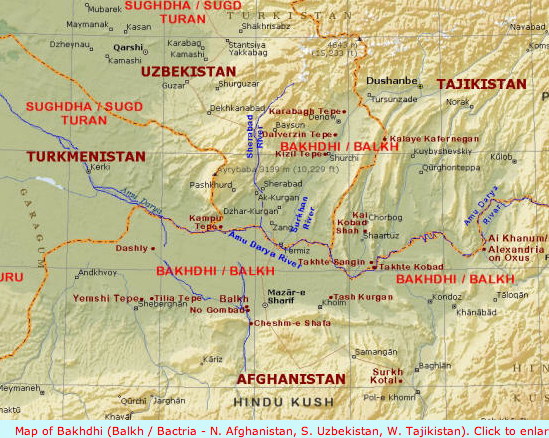 "The Dashly archaeological sites are located south of the Amu Darya River in Northern Afghanistan's Jozjan Province about 38 km north-east of Aqcha and 65 km northwest of Balkh, just to the east of the Aqcha-Kilift road. In ancient times, the cities and settlements of Dashly would have come within the orbit of the Ancient Aryan nation of Bakhdhi (later Balkh) otherwise known to the West as Bactria. The layout of the sites is comparable to those found north of the Amu Darya River as well as in the Murgab delta state of Mouru (Merv/Margiana)....http://www.heritageinstitute.com/zoroastrianism/balkh/dashly.htm

Old Motifs: The Bactria-Margiana Archaeological Complex as a Possible Source by Christoph Huber......."During the last twenty years a hitherto unknown culture in Central Asia has been uncovered by archaeologists. This civilization of the Bronze Age is called Bactria-Margiana Archaeological Complex (BMAC) and is situated, as the name indicates, in Bactria on both sides of the Amu Darya and in Margiana, the Merv-Oasis. It can roughly be dated to the first quarter of the second millennium BC and has been considered to be a fifth center of Old World civilization (with Mesopotamia, Egypt, India and China). The BMAC had strong connections not only to the Neolithic and Chalcolithic sites of the piedmont region of Southwest Turkmenistan, but also with Mesopotamia and Elam, Syria, Anatolia, Eastern and Northern Iran, Baluchistan, the Indus-Valley and even China.".....http://www.turkotek.com/salon_00040/salon.html

"Dashly consists of forty-one archaeological sites spread over 100 sq. km., and whose occupation have been dated from the Bronze Age (c. 2500-1700 BCE) to the Kushan period (c. 3rd cent. CE). The two principal Bronze Age sites are Dashly 1 and the older Dashly 3....Soviet archaeologist Viktor Sarianidi excavated the ruins in the 1970s....http://www.heritageinstitute.com/zoroastrianism/balkh/dashly.htm

Dashly 1 consists of the ruins of a100 x 90 m. mud-brick square citadel with 2 m. high walls overlooking a settlement covering an area some 150 x 120 m in size. It occupation is dated to the late 2nd millennium BCE and after the destruction of the citadel, its ruins appear to have been used as a Bronze Age cemetery. Finds have included bronze weapons and jewellery."...http://www.heritageinstitute.com/zoroastrianism/balkh/dashly.htm 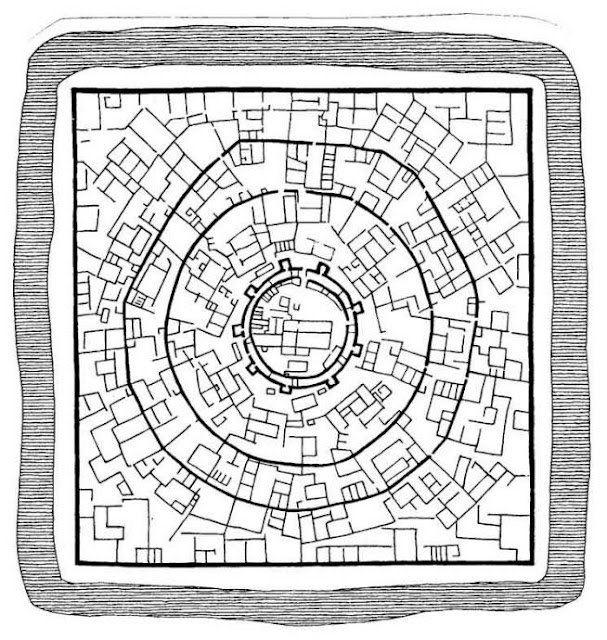 Dashly 3 site consists of two complexes and its occupation is dated to the late Bronze Age, (2300-1700 BCE) and the Iron Age (1700-800 BCE). Pottery, stone vessels and jewellery found at the site are comparable to those found in Turkmenistan and north-eastern Iran. ....The older of the two Dashly 3 complexes, sometimes identified as a palace, is a fortified rectangular 88 x 84 m compound. It is the shape of this complex's outer defences that have attracted attention and comment. The square building had massive double outer walls and in the middle of each wall was a protruding salient composed of a T-shaped corridor flanked by two L-shaped corridors. Within the walls were several house-like buildings and a relatively large storehouse with long, parallel corridors ostensibly used for housing jars while with grain or other supplies. This complex was later replaced by a fortress, which appears to have been rebuilt several times."...http://www.heritageinstitute.com/zoroastrianism/balkh/dashly.htm 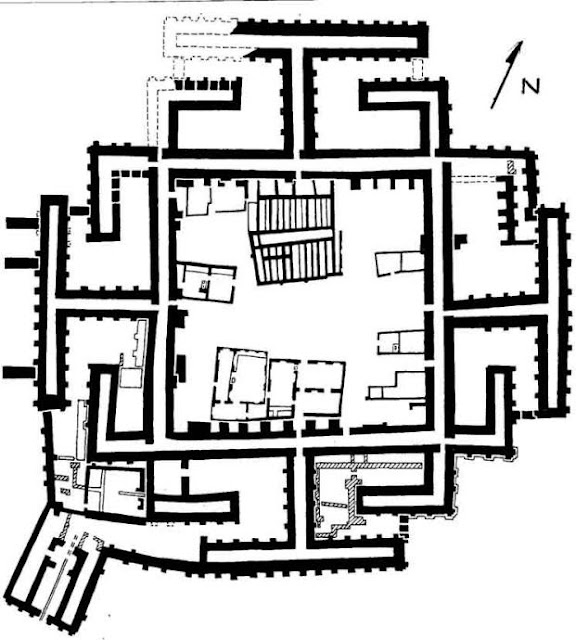 The "younger" second Dashly 3 complex, incorrectly labelled a temple complex, consists of an inner citadel-like structure surrounded by closely packed residence-like structures. The citadel (a fortified palace) consists of what appears to be a relatively modest residence and a storehouse surrounded by a circular double wall buttressed by square towers. The circular defensive walls are approximately 45 m in diameter. Surrounding the citadel's walls are the closely packed house-like structures themselves surrounded and protected by two rings of was and finally a rectangular outer wall measuring about 130 x 150 m.....Surrounding tombs and graves have been looted and the artefacts are said to have been sold in the bazaar at Kabul (P. Amiet in Bactriane Proto-Historique, Syria 54, 1977, pp. 89-121). These artefacts show common elements with artefacts from other settlements in Central Asia and the perimeter of the Indus Valley linking the settlements and regions culturally in the 3rd millennium BCE. For instance the Dashly artefacts have common elements with those found at Sapalli Tepe located north of the Amu Darya; from Togolok to the west of Dashly in the Murgab delta now in Turkmenistan, and from site south of the Hindu Kush near Quetta and Sibri. Some authors believe the artefacts also show affinities with those from Elam (in the south-west of the Iranian plateau) dated to the beginning of the 2nd millennium BCE."...http://www.heritageinstitute.com/zoroastrianism/balkh/dashly.htm 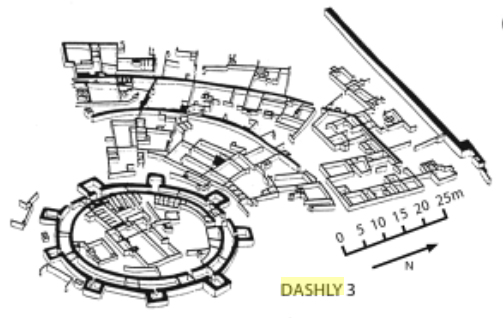 "....the shape of the older Dashly 3 building (2300-1700 BCE), a shape that is fairly unique and a similar shape found in Yantra and carpet designs from the region. The Yantra is a geometrical motif sometimes used as a meditation aid. In Sanskrit, Yantra means "instrument" or "machine". Mandala loosely means circle. Our interest in the Yantra is the similarity of some of its representations such as the Mahakali Yantra found in tantric mandalas with the ground-plan drawing of the older Dashly 3 building. ....The tantric mandala embodies the Yantra as a design of the sanctum at Mr. Meru in Shambhala. Yantra, Mantra and Tantra (the text) are similar sounding words and the Yantra has spiritual, astrological and magical associations in the tantric traditions of some Indian religions. According to the L. B. Lama Thanka Arts Gallery, the "Kalachakra Mandala thangka is surrounded by a ring of fire. Fire in Tantrism means knowledge. The Kalachakra mandala thangka has at its center Mount Meru (in Shambala) with the four corners of the world around it." The four protrusions at the side are four entrances / doors / gates. ....Mount Meru (in Aryana) of Buddhist and Hindu beliefs is likely the same as the high peak of the Hara mountains of Airyana Vaeja" ...http://www.heritageinstitute.com/zoroastrianism/balkh/dashly.htm

"The remains of a highly important Late Bronze Age building from North Afghanistan, the palace of Dashly-III shows strong similarities with the discussed group of seals. Ignoring the area of the entrance, we get the picture of a well planned 'mandala'......Many of the BMAC compartment seals, which are sometimes well traveled, are based on a square or a cross inscribed in a lobed form....Another interesting motif from a BMAC seal which can be followed through the centuries is the endless knot (Knot of Eternity)."....http://www.turkotek.com/salon_00040/salon.html