"Abraham, the Biblical patriarch (Hebrew: אַבְרָהָם, Modern Avraham Tiberian ʾAḇrāhām Ashkenazi Avrohom or Avruhom); the father of the Abrahamic Religions, Judaism, Christianity and Islam: As recounted in the Torah, his name was originally Avram which means "High Father" - "av" (אב) "father", "ram" (רם) "high" - with the "ha" (ה) added in mark of his covenant with God."....http://en.wikipedia.org/wiki/Abraham

"The Patriarch Abraham in the Bible....Historians date Abraham's bibilical story around 2000 B.C., based on clues in Genesis Chapters 11 through 25. Considered the first of the biblical patriarchs, Abraham's life history encompasses a journey starts that in a place called Ur. In Abraham's time, Ur was one of the great city-states in Sumer, a part of the Fertile Crescent located from the Tigris and Euphrates Rivers in Iraq to the Nile in Egypt. Historians call this era from 3000 to 2000 B.C. "the dawn of civilization" because it marks the earliest documented dates when people settled in communities and began such things as writing, agriculture and commerce."....http://en.wikipedia.org/wiki/Abraham

"Genesis 11:31 says that the patriarch's father, Terah, took his son (who was then called Abram before God renamed him Abraham) and their extended family out of a city called Ur of the Chaldeans. Archaeologists took this notation as something to investigate, because according to The Biblical World: An Illustrated Atlas, the Chaldeans were a tribe that didn't exist until somewhere around the sixth and fifth centuries B.C., nearly 1,500 years after Abraham is believed to have lived. Ur of the Chaldeans has been located not far from Haran, whose remnants are found today in southwestern Turkey... The Chaldeans lived around the sixth-to-fifth century B.C., when Jewish scribes first wrote down the oral tradition of Abraham's story as they put together the Hebrew Bible. .".....The Biblical World: An Illustrated Atlas (National Geographic 2007)

"20,000 clay tablets found deep inside in the ruins of the city of Mari in today's Syria. According to The Biblical World, Mari was located on the Euphrates River some 30 miles north of the border between Syria and Iraq. In its time, Mari was a key center on the trade routes between Babylon, Egypt and Persia (today's Iran).....Mari was the capital of King Zimri-Lim in the 18th century B.C. until it was conquered and destroyed by King Hammurabi. In the late 20th century A.D., French archaeologists looking for Mari dug through centuries of sand to uncover Zimri-Lim's former palace. Deep within the ruins, they discovered tablets written in an ancient cuneiform script, one of the first forms of writing.....Some of the tablets have been dated back 200 years before Zimri-Lim's time, which would place them around the same time that the Bible says Abraham's family departed Ur. Information translated from the Mari tablets would seem to indicate that the Sumerian Ur, not Ur of the Chaldeans, is more likely the place where Abraham and his family started their journey......the city of Haran, which was some 500 miles north of the Sumerian Ur.....Abraham's family may have been Amorites, a Semitic tribe that began to migrate out of Mesopotamia around 2100 B.C. The Amorites' migration destabilized Ur, which scholars estimate collapsed around 1900 B.C.".....The Oxford Annotated Bible with The Apocrypha, New Revised Standard Version (1994).

"...Ur (Sumerian: Urim) was an important Sumerian city-state in ancient Mesopotamia located at the site of modern Tell el-Muqayyar (Arabic: تل المقير‎) in Iraq's Dhi Qar Governorate. Once a coastal city near the mouth of the Euphrates on the Persian Gulf, Ur is now well inland, south of the Euphrates on its right bank, 16 kilometres (9.9 mi) from Nasiriyah....The city dates from the Ubaid period circa 3800 BC, and is recorded in written history as a City State from the 26th century BC, its first recorded king being Mesh-Ane-pada. The city's patron deity was Nanna (in Akkadian Sin), the Sumerian and Akkadian (Assyrian-Babylonian) moon god, and the name of the city is in origin derived from the god's name, the classical Sumerian spelling, literally "the abode of Nanna....The site is marked by the ruins of the Ziggurat of Ur, built in the 21st century BC ...Ur is considered by many to be the city of Ur Kasdim mentioned in the Book of Genesis (Biblical Hebrew אוּר) as the birthplace of the Hebrew patriarch Abram (Abraham; Aramaic: Oraham, Arabic: Ibrahim), traditionally believed to be sometime in the 2nd millennium BC......".....http://en.wikipedia.org/wiki/Ur 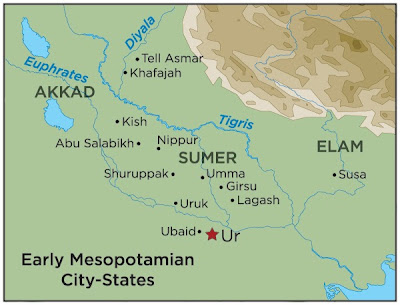 " “In the book of Exodus, God tells Moses, ‘I appeared to Abraham, Isaac, and Jacob as God Almighty, but by my name the LORD [=Yahweh] I did not make myself known to them’ (Exodus 6:3).....earlier, in Genesis, where God does make himself known to Abraham as the LORD: ‘Then he [God] said to him [Abraham], “I am the LORD [=Yahweh] who brought you from Ur of the Chaldeans”’ (Genesis 15:7)......Yahweh (/ˈjɑːweɪ/ or /ˈjɑːhweɪ/; Hebrew: יהוה‎), was the national god of thekingdoms of Israel and Judah.....In the oldest biblical literature (12th–11th centuries BCE) Yahweh is a typical ancient Near Eastern "divine warrior" who leads the heavenly army against Israel's enemies; he and Israel are bound by a covenant under which Yahweh will protect Israel, and Israel in turn will not worship other gods..... promoting him as the supreme god over all others in the pantheon, notably Baal, El, and Asherah (the last of whom may have been his consort).....Over time Yahwism became increasingly intolerant of rivals, and the royal court and temple promoted Yahweh as God of the entire cosmos.....With the work of Second Isaiah towards the end of the Babylonian exile (6th century BCE), the very existence of foreign gods was denied, and Yahweh was proclaimed as the creator of the cosmos and true God of all the world.".....http://en.wikipedia.org/wiki/Yahweh

".... the term "al-ilah" (the God) ultimately derives from the Semitic root used as a generic term for divinity.....The oldest name for God used in the Semitic world consists of but two letters, the consonant 'l' preceded by a smooth breathing, which was pronounced 'Il' in ancient Babylonia, 'El' in ancient Israel. The relation of this name, which in Babylonia and Assyria became a generic term simply meaning ‘god’, to the Arabian Ilah familiar to us in the form Allah, which is compounded of al, the definite article, and Ilah by eliding the vowel ‘i’, is not clear."..".....http://en.wikipedia.org/wiki

"ʾĒl (written aleph-lamed, e.g. Ugaritic: 𐎛𐎍, Phoenician: 𐤋𐤀, Classical Syriac: ܐܠ‎, Hebrew: אל‎, Arabic: إل‎ or إله, cognate to Akkadian: ilu) is a Northwest Semitic word meaning "deity"....In the Canaanite religion, or Levantine religion as a whole, Ēl or Il was the supreme God, the Father of humankind and all creatures and the husband of the Goddess Asherah as recorded in the clay tablets of Ugarit (modern Ra′s Shamrā—Arabic: رأس شمرا‎, Syria)......The noun ʾEl was found at the top of a list of Gods as the "Ancient of Gods" or the "Father of all Gods", in the ruins of the royal archive of the Ebla civilization, in the archaeological site of Tell Mardikh in Syria dated to 2300 BC. The bull was symbolic to Ēl and his son Baʻal Hadad, and they both wore bull horns on their headdress....He may have been a desert god at some point, as the myths say that he had two wives and built a sanctuary with them and his new children in the desert. Ēl had fathered many gods, but most important were Hadad, Yam, and Mot.".....http://en.wikipedia.org/wiki/El

"The Persian Mithras was a god of contracts (which is the literal meaning of his name) and all things associated with contracts: justice, friendship, cattle-herding and the sun (which beholds all things and thus can ensure the keeping of oaths). Zoroaster (6th century BC) specifically denounced the sacrifice of the bull, suggesting this was a ceremony of the ancient worshippers of Mithras....In a Roman context, Mithras was a sun god (called sol invictus, "the invincible sun"), a "bull-slayer," "cattle-thief" and the savior of initiates of his cult. He was probably also the god of kings and of war .".....http://www.religionfacts.com/greco-roman/sects/mithraism.htm

"The Proto-Indo-Iranian word *mitra- (nominative *mitras) means "[that which] binds", deriving from the root mi- "to bind", with the "tool suffix" -tra- (cf. man-tra-). This particular meaning is preserved in the mithra "covenant" written in Avestan, the old Eastern Iranian liturgical language used to compose the sacred hymns and canon of the Zoroastrian sacred scripture of the Avesta. In Sanskrit, mitra literally means "friend", one of the aspects of binding and alliance. ".....http://www.romanarmy.net/mithras.shtml

"....In the Old Testament the word covenant is translated from the Hebrew berîyth ^[Strong's\ #1285]^. This Hebrew word derives from a root which means "to cut" and hence a covenant is a "cutting" with reference to the ancient custom of cutting or dividing animals into two parts with the contracting parties passing between them, in making a covenant, see for example Jeremiah 34:18-19. Some suggest the parties of the covenant are thereby saying in essence, "May I be torn apart like these animals if I fail to uphold my part of this covenant." This is illustrated in Genesis 15, as God alone passes between the slaughtered animals while Abraham sleeps, again emphasizing the unilateral nature of this covenant, as well as the ultimate level of commitment involved - God putting his very life on line, as it were, as guarantee.".....http://www.theopedia.com/Covenant