"It is believed that sun worship may have played an important part of their beliefs, and that Druidism was monotheistic, as they ultimately believed in one divine spirit, while deeply venerating the sun, moon, stars, and nature spirits......It was known in the ancient world that the Druids, the "magi of the North", believed in the immortality of the soul, and in reincarnation......a good number of early Celtic beliefs seem to have similarities with early Indian Vedic culture and beliefs. This is most likely because of their common Indo-European heritage, as academics like Dumezil have shown regarding languages. Briefly, Celtic deities included Gods who often had multiple functions, who actualised nature forces, promulgated ethics, justice, knowledge, arts, crafts, medicine, speech, harvests, gave courage for war and battled forces of darkness, and there are Goddesses of land, rivers and springs. The early Irish god Lugh may have been an early solar deity, as he is portrayed as a bright, shining god who is later thought to have been a possible prototype for St. Michael. The name Lugh means "shining one" and his festival is on Lughnasadh, the eve of 1st August. Other gods in the early Celtic pantheon were also believed to have bright, shining qualities. The early Vedic pantheon included deities of fire, solar, atmospheric and nature forces, ritual stimulants, speech, crafts, arts, harvest, medicine, ethical order, war, and battlers of malevolent beings. There are goddesses of land, rivers, and so on and, like the Celtic deities, gods are often shown as having overlapping functions. The word deva means "shining one", or a god that is very bright, a spiritual being"....http://www.ancientquest.com/embark/druidism.html

""Keen" as a noun or verb comes from the Irish/Scots Gaelic term "caoineadh" (to cry, to weep) and references to it from the seventh, eighth and twelfth centuries are extensive......After consistent opposition from the Roman Catholic Church in Ireland that went so far as to recommend excommunication for offenders, the practice became mostly extinct.....One of the most ancient forms of Celtic music, which still survives in a few areas in western Ireland, is the marbhnai, or "death song", also called keening. (caoine). These songs are sung by women, and have been compared with the raga style of India, which it is similarly improvised around three or four notes.... the two cultures also share the broader concept of a special magico-religious power of music, and an awareness of the breath and of poetic verse. Druids memorised extremely long poetic sagas that often ended with a three-part cadence at the end; the bards of the Vedic literature are portrayed as memorising lengthy poetic sagas that convey spiritual knowledge and dharmic duty, and the poetic metre often ends with a three-part cadence at the end. Thus, one can see why many scholars believe that the Hindu Brahmin in the east and the Celtic Druid in the west were lateral survivals of an ancient Indo-European priesthood.

"...after the arrival of the Romans? .....from the texts of Suetonius, Tacitus, and Pliny that the early Roman emperors of the 1st century AD saw their powerful priesthood as a threat and tried to suppress it....Caesar (Gallic Wars), Strabo (Geography) and Pliny (Natural History), Stoic philosopher Posidonius....Druids were especially gifted at poetry, rhetoric, philosophy, and all verbal skills. Most early sources agree that the Druidic elite was divided into three parts: the Bards (lyric poets, musicians), Vates (diviners and seers) and the Druids (priests, philosophers, theologians)."..... 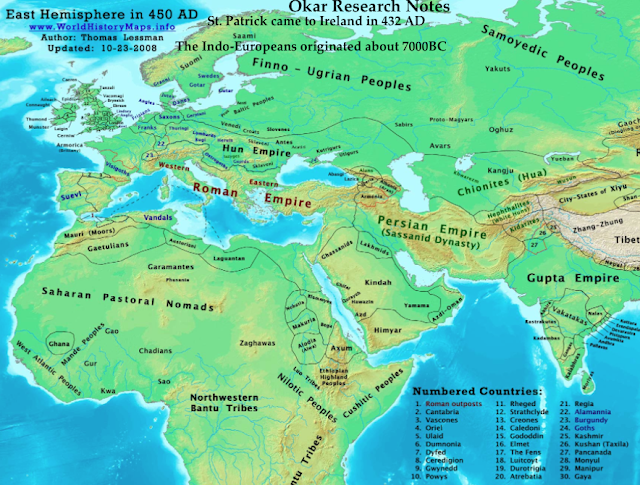 "The Indo-European Family was originally thought to have originated during the Neoloithic period (about 7000BC).....the people bagan to migrate between 3500BC and 2500BC, spreading west to Europe, south to the Mediterranian, north to Scandinavia, and east to India.....The Indo-European Family is divided into twelve branches....The Celtic Branch is now the smallest branch. The languages originated in Central Europe and once dominated Western Europe (around 400BC). The people migrated across to the British Isles over 2000 years ago. Later, when the Germanic speaking Anglo Saxons arrived, the Celtic speakers were pushed into Wales (Welsh), Ireland (Irish Gaelic) and Scotland (Scottish Gaelic).."

"St. Patrick came to Ireland in 432 AD and reached Tara in 433. He’s been credited for having introduced Christianity to Ireland. However, missionaries were already in Ireland converting people, but he did convert the royalty. King Laoghaire (pronounced Leary) was the High King of Tara from 428-458 AD. St. Patrick had angered the High King because he lit the Pascal Fire on the Hill of Slane, which is quite visible from Tara. The King had declared that no other fires were to be lit until the Druids had lit the sacred flame. Patrick probably knew this and thumbed his nose at the King and did it anyway. The legend says that he fought off the Druids by using magic, and eventually befriended the King who agreed to be baptized, and the rest is history. ".....http://sacredsitetour.com/Sacred-Sites-of-Ireland/hill-of-tara.html