"Noh probably originated in ancient matsuri in which shamans allowed deities to possess their bodies so that they could tell their history and explain their powers."....Matsuri: The Festivals of Japan....Herbert E. Plutschow, ‎Patrick Geoffrey O'Neill - 1996 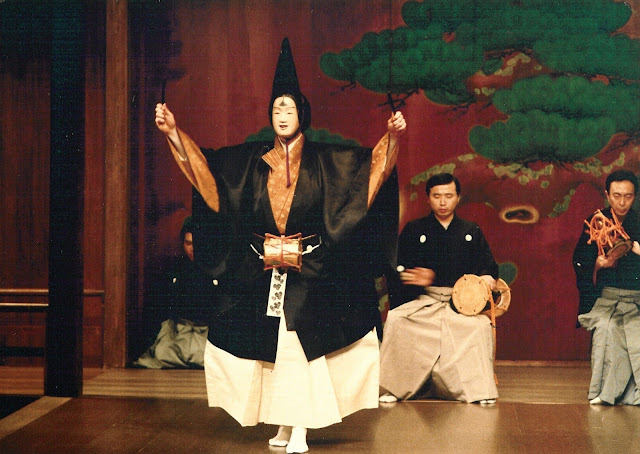 "William Fairchild "Shamanism in Japan", (1962). Shinto mythology is examined from a shamanic viewpoint, highlighting such features as the cosmic pillar, Three Worlds and tree of life. This all ties in very much with Siberian shamanism. There’s a section too on animal spirits, whereby kami in Japan are associated with particular animals, and descriptions of ecstatic practice such as the striking phenomenon of fox possession....sections on Matsuri and Mikoism to be the most enlightening. The former are viewed as having originated in shamanistic practice. ”The Descent of the Gods expressed itself in the institution of the matsuri,’ writes Fairchild. ”The main purpose of the matsuri was to learn the will of gods....shamanic miko practice continued right up to the Meiji Restoration of 1868.....Divining, driving out evil spirits, and sacred dance were their main activities......”....http://www.greenshinto.com/wp/2011/09/24/shamanism-and-shinto/ 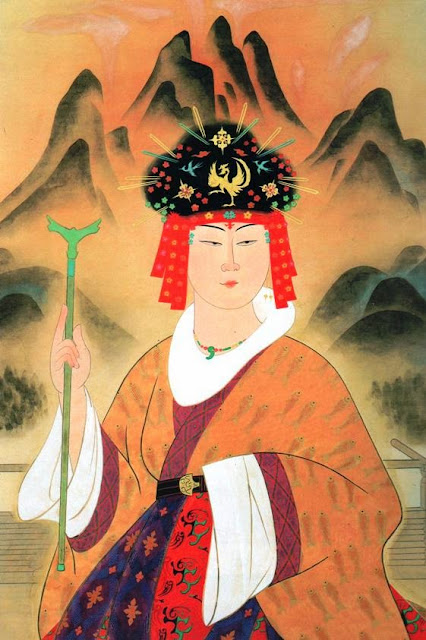 Himiko or Pimiko (卑弥呼, 175-248 CE) was a shaman queen of Yamataikoku in ancient Wa (Japan). Early Chinese dynastic histories chronicle tributary relations between Queen Himiko and the Cao Wei Kingdom (220-265), and record that the Yayoi period people chose her as ruler following decades of warfare among the kings of Wa......Both Nippon and Nihon literally mean "the sun's origin", that is, where the sun originates, and are often translated as the Land of the Rising Sun. Before Nihon came into official use, Japan was known as Wa (倭?) or Wakoku (倭国?). Wa was a name early China used to refer to an ethnic group living in Japan around the time of the Three Kingdoms Period (184–280 AD).....Her name was Himiko [卑彌呼]. She occupied herself with magic and sorcery, bewitching the people....She had one thousand women as attendants, but only one man."....http://en.wikipedia.org/wiki/Himiko

"In Blacker’s rather comprehensive study of shamanism in Japan (Carmen Blacker, The Catalpa Bow....1975), she defines two distinct types of shaman. The first she refers to as the medium. The medium is always female and primarily is gifted with the power to receive kami, though she may also possess a host of other powers such as clairvoyance and clairaudience. The second she refers to as the ascetic. The ascetic is always male and often works in conjunction with the medium. The ascetic may be used to compel the kami to perform certain actions, including compelling them to enter the body of the medium. The former are often referred to as miko and are Shinto in origin. The later are referred to as yamabushi and are Buddhist in origin.....though the miko does find her origin in Shinto, the distinction between Shinto and Buddhism quickly evaporates long before we reach the modern age."....http://adfgagliardi.webs.com/ShamanismPaper.pdf

"SINO-PLATONIC PAPERS...Number 214 September, 2011...Tennō (天皇): The Central Asian Origin of Japan’s Solar Kingship by Mark A. Riddle....Solar Kingship in Central Asia 1. Scythians: Nomads of the European Steppe...Russian scholar D. S. Raevskii derives ‘Tabiti’ from Iranian ‘Tarayati,’ the flaming or burning one, and says her predominance “corresponds to the Indo-Iranian concept of fire as the primeval substance and the basis of the universe.”23 Raevskii notes that Herodotus’ account of the Scythians “allows us to reconstruct the existence among the Scythians of the concept of the solar nature of the king,” and he follows Russian Iranologist V. I. Abaev in deriving the name of the first king of the Scythians, Herodotus’ ‘Colaxais,’ from the Iranian hvar-xsaya, ‘sun king.’....Japanese ethnologist Yoshida Atsuhiko identified the sun goddess Amaterasu with the Scythian Great Goddess....Other Japanese scholars, in addition to Yoshida, have suggested the possibility of actual links between Scythian culture and Japan; linguist Oono Susumu, for example, attributed similarities between Greek and Japanese mythology (for example, the parallels between the Japanese pair Izanagi and Izanami and the Greek pair Orpheus and Eurydice) to a Scythian connection with Japan."...http://sino-platonic.org/complete/spp214_japan_king.pdf