"The Iron Age in Central Asia began when iron objects appear among the Indo-European Saka in present-day Xinjiang between the 10th century BC and the 7th century BC, such as those found at the cemetery site of Chawuhukou."...Mark E. Hall, "Towards an absolute chronology for the Iron Age of Inner Asia," Antiquity 71.274 [1997], 863-74.

"The Iron Age is the period generally occurring after the Bronze Age, marked by the widespread use of iron or steel. The adoption of such material coincided with other changes in society, including differing agricultural practices, religious beliefs and artistic styles."....http://en.wikipedia.org/wiki/Iron_Age#Central_Asia

"Between 1206 and 1150 BCE, the cultural collapse of the Mycenaean kingdoms, the Hittite Empire in Anatolia and Syria, and the New Kingdom of Egypt in Syria and Canaan interrupted trade routes and severely reduced literacy. In the first phase of this period, almost every city between Pylos and Gaza was violently destroyed, and often left unoccupied thereafter: examples include Hattusa, Mycenae, and Ugarit.".....Robert Drews, The End of the Bronze Age: changes in warfare and the catastrophe ca. 1200 B.C., 1993.

"Evidence includes the Egyptian records of invading "northerners from all the lands".... the collapse coincides with the appearance in the region of many new ethnic groups. These include Indo-European tribes, such as the Phrygians, Proto-Armenians, Medes, Persians, Cimmerians, Lydians and Scythians, as well as the Pontic speaking Colchians, Hurro-Urartuans and Iranian Sarmatians. These groups settled or emerged in the Caucasus, Iran and Anatolia. Thracians, Macedonians and Dorian Greeks seem to have arrived at this time – possibly from the north, usurping the earlier Greeks of Mycenae and Achaea."....http://en.wikipedia.org/wiki/Bronze_Age_collapse#Climate_change

"Classically, the Iron Age is taken to begin in the 12th century BCE in the ancient Near East, ancient Iran, ancient India (with the post-Rigvedic Vedic civilization), and ancient Greece (with the Greek Dark Ages). In other regions of Europe, it started much later. The Iron Age began in the 8th century BCE in Central Europe and the 6th century BCE in Northern Europe. Iron use, in smelting and forging for tools, appears in West Africa by 1200 BCE, making it one of the first places for the birth of the Iron Age. It is believed that meteoric iron, or iron-nickel alloy, was used by various ancient peoples thousands of years before the Iron Age. This iron, being in its native metallic state, required no smelting of ores."

"In 1972, near the city of Gaocheng) in Shijiazhuang (now Hebei province), an iron-bladed bronze tomahawk dating back to the 14th century BCE was excavated. After a scientific examination, the iron was shown to be made from meteoric siderite. The Iron Age in East Asia began, however, when iron objects began to appear in present-day Xinjiang between the 10th century BCE and the 7th century BCE, such as those found at the cemetery site of Chawuhukou. This was soon followed by the development of iron metallurgy on the Manchurian plain by the 9th century BC. Iron metallurgy reached the Yangzi Valley toward the end of the 6th century BCE. The few objects were found at Changsha and Nanjing. According to the mortuary evidence suggests that the initial use of iron in Lingnan belongs to the mid to late Warring States period (from about 350 BCE)."....http://www.steelguru.com

"Meteoric iron......Before the advent of iron smelting, meteoric iron was the only source of iron metal apart from minor amounts of telluric iron. Meteoric iron was already used before the beginning of the iron age to make cultural objects, tools and weapons."....Waldbaum, J. C. and James D. Muhly; The first archaeological appearance of iron and the transition to the iron age chapter in The coming of the age of iron, Theodore A. Wertme. ed., Yale University Press, 1980, ISBN 978-0300024258

"Tepe Fullol (also known as Khush Tepe) is a village in northern Afghanistan where the treasure of Fullol was found, consisting of twenty vessels in gold and silver dated to the Bronze Age. It was accidentally discovered in 1965 by Afghan farmers in a grave cache and provided the first evidence of the Oxus civilisation (also known as BMAC) in northern Afghanistan.....Tepe Fullol is situated in Baghlan Province at the junction of the Khost and Sai valleys. On the basis of iconographic comparisons, the treasure has been dated to between 2600 and 1700 BC. There is also a mound, covering an area 14 by 18 metres (46 by 59 ft) and 20 metres (66 ft) high.....The area's wealth probably derived from precious materials extracted from the nearby mountains , in particular lapis lazuli from Badakshan, which were widely traded. The vessel's designs include animal imagery, such as a boar, a stag, snakes and bearded bulls (the latter derived from distant Mesopotamia), indicating that at this early date Afghanistan was already part of an extensive network of trade and cultural exchanges.".....http://en.wikipedia.org/wiki/Tepe_Fullol 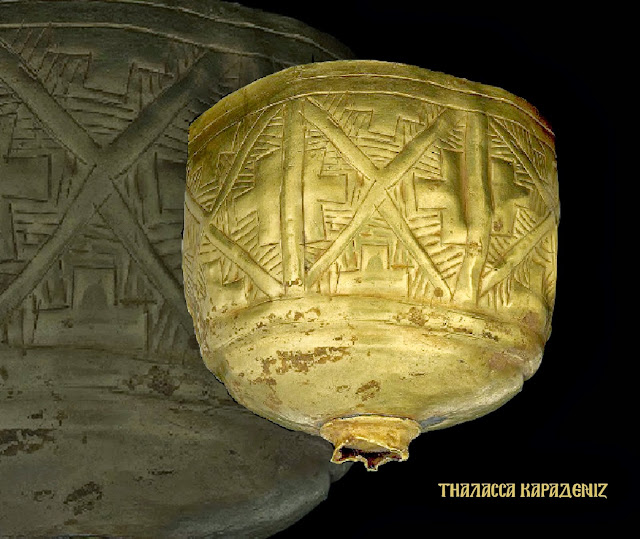 "...Tepe Fullol: a gold bowl from 2500-2000 BC...... Sarianidi considers the site to be part of the large Baktria-Margiana-Archeological-Complex........Hastinapur is one of the chief sites of the Painted Grey Ware culture (PGW) an Iron Age culture in the Gangetic plain, lasting from roughly 1200 BC to 600 BC. It is contemporary to, and a successor of the Black and Red ware culture. It is succeeded by Northern Black Polished Ware from ca. 500 BC. ...The Gandhara (or Swat) grave culture emerged ca. 1600 BC, and flourished in Gandhara, Pakistan from 1500 BC to 500 BC. Simply made terracotta figurines were buried with the pottery, and other items are decorated with simple dot designs. Horse remains were found in at least one burial......