Tillya Tepe & The Bactrian Treasure (145 BC) 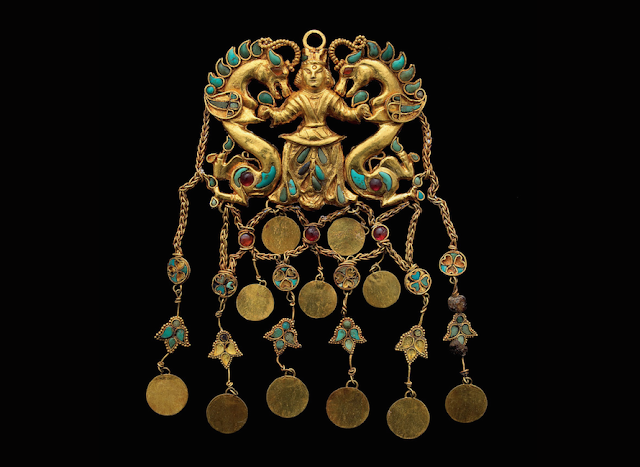 Tillya Tepe ....."Nomads from the northern steppes, which stretch from the Black Sea to Mongolia, overran Bactria around 145 BC, bringing an end to the Greco-Bactrian kingdoms that had flourished there. The first evidence of this nomadic presence in the region was found at Tillya Tepe, a name meaning “hill of gold." Excavated in 1978 by a Soviet-Afghan team of archaeologists, the site contained the tombs of a chieftain and five female members of his household, who had been buried some time in the first century BC or the first century AD." 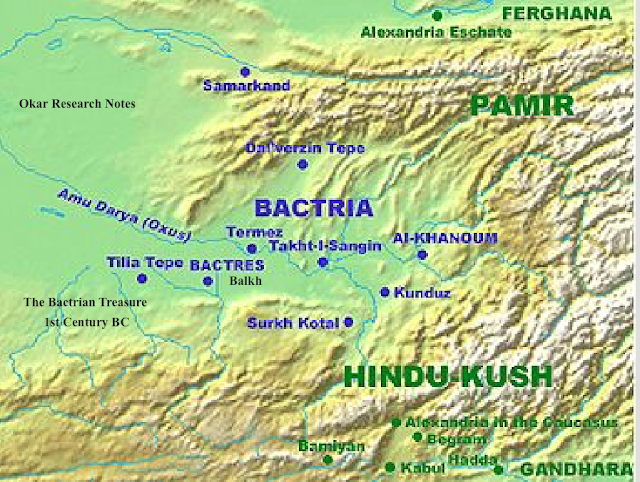 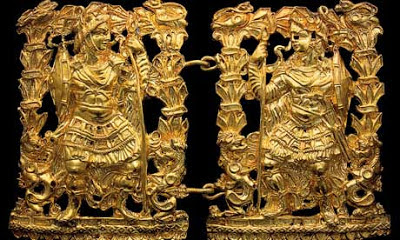 The Bactrian Treasure (also known as the Bactrian Gold or Bactrian Hoard) is a treasure cache that lay under the "Hill of Gold" (also known as the "Golden Hill", or Tillia tepe) in Afghanistan for 2,000 years until Soviet archeologists exposed it shortly before the 1979 invasion.....The hoard is a collection of about 20,600 gold ornaments that was found in six burial mounds near Sheberghan.....The mound lies just beyond the oasis town of Sheberghan in northern Afghanistan, on the plain that slips south to the Hindu Kush and north to the banks of the Amu Darya, or Oxus. This was once Bactria, where the Hellenic world briefly touched and intertwined with the worlds of the Indus and the Siberian steppe. Greeks prospered here for a century or so after the death of Alexander the Great, in 323 BC, and then were driven off. The mound is anonymous now, barely noticeable from the road. It stands three metres (ten feet) high, 100 metres in diameter, lopped square like a Celtic barrow, the whole of it overgrown with pale weeds. Locals named it Tillya Tepe, or Hill of Gold 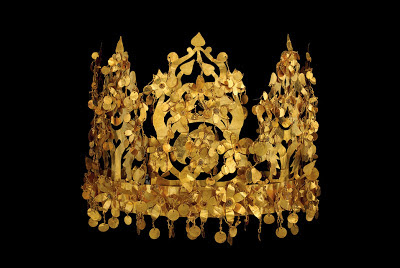 "21,000 pieces of gold in six burial chambers within Tillya Tepe. The hoard had belonged to the rich Kushan nomads buried there around the time of Christ. It had lain undisturbed for 2000 years.....A model tree fashioned of gold and hung with fruit of pearls. A salver grooved in tangerine segments and inscribed in Greek. A griffin cut into milk-white chalcedony. Pendants of agate, garnet, turquoise and cornelian. Sharpened boar tusks set in gold. A representation of Aphrodite according to Bactrian tastes: stern and plump with small, thrust-out breasts. A man riding a dolphin upon a belt buckle. A gold crown that could be taken apart and packed in a saddlebag. A Chinese mirror. Dragons with wings of turquoise mauling leopards down the length of a gold scabbard. Coins from Rome, Parthia and India. Bits and bridles in Siberian style and studded with gems, the better to show off the flight of the horses that wore them." 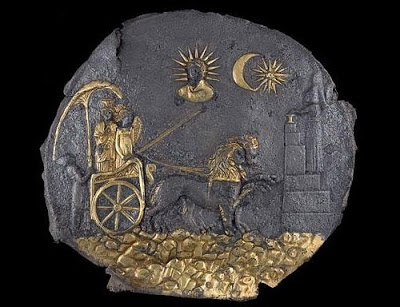 "Tillya Tepe....A mound circa 80 meters in diameter and four meters high, enclosed by mud-brick walls circa 1.5 meters high. Inside is a temple consisting of two halls with 15 columns and a cruciform altar. The site is possibly a very early Indo-Iranian settlement. During the early Kushan period, Tillya Tepe was re-used as a necropolis for a wealthy family. In 1978 six burials were excavated, consisting of raised wooden coffins containing burial adornments of silk, gold and silver. Some 20,000 gold objects were recovered, consisting of bracelets, bowls, clasps, buttons, weapons, statuary jewelery, etc., representing a mixture of Indian, Central Asian, Iranian and Hellenistic styles. Other artifacts from the Mediterranean and China (products from Silk Road trade, not of local manufacture) and gold coins (one with Buddhist inscriptions, another of Parthian origin and another of Roman origin, struck during the reign of were also found. Tillya Tepe is, by all accounts, the most important archeological discovery made in Afghanistan since the excavatation of Begram during the 1930s. Few sites from this period have been discovered intact, allowing modern archaeologists to reconstruct the ensembles worn by the deceased as they were laid into their graves. Click here to see a partial reconstruction of garments worn by the prince and princess in Tome IV."..... Warwick Ball, Archaeological Gazetteer of Afghanistan, 1982