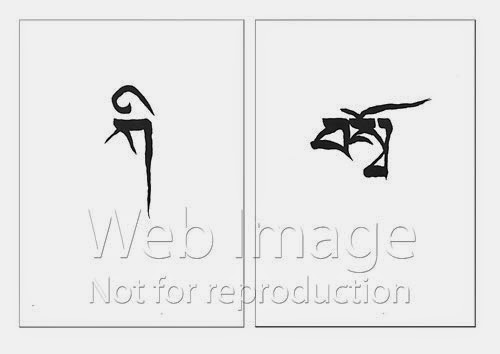 Ki Ki So So....."The Shambhala warrior’s cry. Chanting this cry is a way to rouse your head and shoulders, a way to rouse a sense of uplifted dignity. It is also a way to invoke the power of windhorse and the energy of basic goodness. We might call it a battle cry, as long as you understand that this particular battle is fighting against aggression, conquering aggression, rather than promoting hatred or warfare. We could say that the warrior’s cry celebrates victory over war, victory over aggression. It is also a celebration of overcoming obstacles. The warrior’s cry goes like this: Ki Ki So So. Ki is primordial energy, similar to the idea of ch’i in the Chinese martial arts. So is furthering or extending that energy of ki and extending the power of Ki Ki So So altogether. Sitting in good warrior posture, with your hands on your hips, hold your head and shoulders and shout:
Ki Ki So So"
Chögyam Trungpa Rinpoche.....http://www.shambhala.org/teachings/ 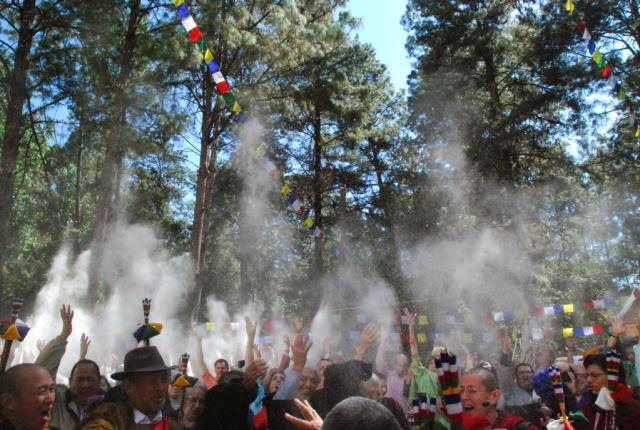 "Ki ki so so lha gyal lo" is the prayer a Tibetan will recite at the summit of a mountain pass. It can be translated as "victory to the gods"The Tibetans believe that it is at these high mountain passes that the good gods fight with the evil gods and that the lung-tar (coloured paper printed with prayers) and prayer are an offering to the good gods. Offering these prayers at mountain passes is especially auspicious because it is believed that the high winds will be of benefit in carrying the prayers." 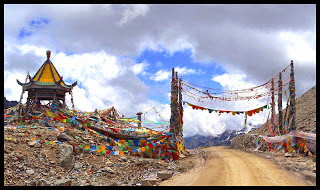 CHA..... (ca, cha'o,chao)(phywa).... "the term cha refers to a principle or force that embraces all the positive aspects expressed in Tibetan by words such as yang (prosperity), pal (glory), phunsum tsogpa (completeness), wang thang (ascendancy-capacity), trashi (good fortune), etc. When the forces of our cha, wangthang, and lungta are weak and in decline, secondary negative causes arise more conspicuously." ..."all phenomenon, positive as well as negative are determined by the cha. All the various conditions and situations of a person's life are controlled by or dependent on the cha force. To increase the cha (cha'o:increase, increase) one must summon the cha and yang present in the universe through a series of rites of propitiation of the cha (phywa sgrub)." (Norbu: 1995..pg 63 &72)

SOUND...."the spelling sgra-la (la of sound) is based on a very deep principle. Although not visible, sound is perceived through the sense of hearing and is linked to the Cha (the individual's positive force, the base of prosperity), and wangthang (ascendancy-capacity [authentic presence]), both aspects related with the protective deities and entities since birth. Sound is considered the foremost connection between the individual and his la. This is the meaning of the word sgra-la." (Norbu: 1995...pg 62)...."the deities are invoked with the sound of the drum, the shang, the conch shell, and the flute (rgya gling)." (Norbu: 1995..pg 53

phywa - auspicious, cha, individual's positive force, the base of prosperity, signifies the indestructible vital capacity, prediction in terms of the relation between one's phywa and the phywa of the outer environment 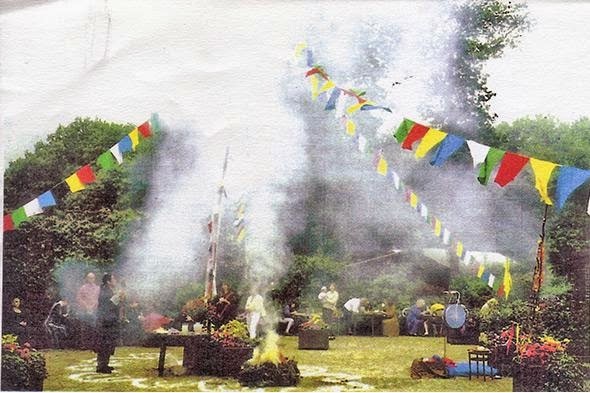 An ancient Tibetan Bonpo rite called Sang-sol, conducted by Lama Khemsar Rinpoche as an outdoor ceremony for the benefit of the planet and its inhabitants.....http://www.yungdrungbon.com

Sang Sol....."Incense offering, or Sang-sol, is a ceremony performed by Tibetans from all walks of life to mark important events in their lives. A widespread national custom, it can be preformed individually or in groups, on occasions such as the Dalai Lama's birthday, marriages, third day of the Tibetan New Year, or preceding other important events..... It is not clear whether the Tibetan custom of offering incense originated in India or not, as only two references to such practice can be found in the Indian texts. It is mentioned in the Guhyasamaja Tantra that one should know about the three kinds of fragrance. The other reference is to be found in the story of Bhadri of Magadha, which tells of how she invited the Buddha to her house and made offerings of smoke to him from the roof..... According to the writings of various scholars, it seems that incense offering was carried out in Tibet from the very early times when the teacher Tonpa Sherab, founder of the Bon religion, first came from Zhang Zhung (Afghanistan/Tadzhikistan?) to spread his doctrine in Tibet.".....transcribed from "ME-LONG", The Newsletter of the council for Religious and Cultural Affairs of H.H. the Dalai Lama", N0.6, April 1990

phywa bon - a bon po who was expert in performing rites to summon the phywa nad g.yang to enhance fortune and prosperity