SHAMBA....."As for sham, it could either be connected with the Indian God Shiva, if the term is ascribed an Indian origin, or with the word Shamash of Sumerian origin meaning "sun", which comes into modern Arabic as shams. Thus, apart from the Sumerian sun god, Shambash, whose temple was near Babylon, there are known to have been other famous temples dedicated to the sun called shams or shamba in Balkh, the ancient capital of the Bactrian kingdom in northern Afghanistan, and in Multan which according to Alberuni used to be called Shambha-pura (City of the Vision of the Sun) in the pre-Islamic period. In Multan, the great annual festival of the year was celebrated in honour of the sun and there are descriptions of the golden idol representing the sun to support this identification. Though the temple was destroyed after Alberuni saw it, the sun god Surya in Multan (as in many other Indian temples) is described as wearing "northern" (central Asian) nomadic dress, including in this case red leather boots, though leather is anathema in Hindu temples. Trade routes to Tibet ran through both Multan and Balkh, so the name shams or shambha could as easily have been carried to Tibet as the dress from north of the Himalayas to Multan......."...http://www.chronicleproject.com/james_george_searching_for_shambhala.html

"Names of Shiva......SHIVA SHAMBO.....Shiva represents the power of transformation and is pure consciousness. Shiva is that which you are capable of becoming. Shiva is often called Mahadeva, the Great God, and also Shambo, the abode of joy." 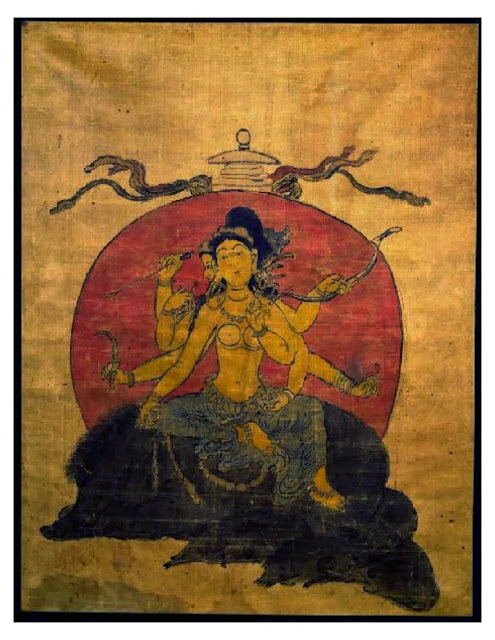 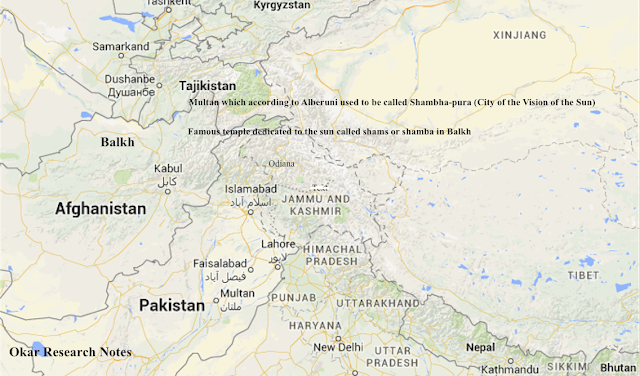 "Multan is one of the oldest cities not only in the Asian subcontinent but also in the world.....the current name is derived from the Sanskrit name Mulasthana named after a Sun Temple.....Multan has frequently been a site of conflict due to its location on a major invasion route between South Asia and Central Asia. It was conquered by Alexander the Great in 326 BC. In the mid-5th century BC, the city was attacked by a group of Huna Hephthalite nomads led by Toramana.....Sun Temple of Multan also known as Aditya Sun Temple was an ancient Hindu temple dedicated to Surya also called Aditya.....This Sun Temple has been mentioned also by Greek Admiral Skylax, who passed through this area in 515 B.C. The Multan and its temple are also earlier known as Kashya-papura is mentioned by Herodotus......Huen Tsang is said to have visited this temple in 641 AD and had described the deity made of pure gold and eyes of whom were made of large red rubies. The gold, silver and gems were abundantly used in doors, pillars and shikhara of temple. Thousands of Hindus regularly went to Multan to worship Sun God. He is also said to have seen several dancing girls (devadasis) in the temple.He further mentions the deities of Shiva and Buddha were also installed in the temple. Even after conquest of Multan by Umayyad Caliphate in 8th Century AD, under Muhammad bin Qasim, the Sun Temple was left intact, as it was a source of great income.Al-Baruni, who also visited Multan in 10th Century AD has also left glowing description of it. However, the temple is said to have been finally destroyed by Mahmud of Ghazni in 1026 AD.....The city of Multan may get its name from the Sanskrit name Mulasthana named after location of this Sun Temple.The exact site of Sun Temple of Multan is, however, unknown and subject of debate for researchers."....Sun-worship in ancient India. 1971. pp. 172.......http://en.wikipedia.org/wiki/Sun_Temple_of_Multan