"Drung (ancient narratives), deu (symbolism).....the epic poems and legends of Tibet`s secular culture. & the mysteries of the ancient symbolic languages that conveyed wisdom inexpressible in conventional terms....Tönpa Shenrab Miwoche is believed to have been born in the land of Tagzig Olmo Lung Ring (Shambhala), to the west of present day Tibet (which some scholars identify with the Persian Tajik)......considered an axis mundi, which is traditionally identified as Mount Yung-DRUNG Gu-tzeg ("Edifice of Nine Swastikas")....." 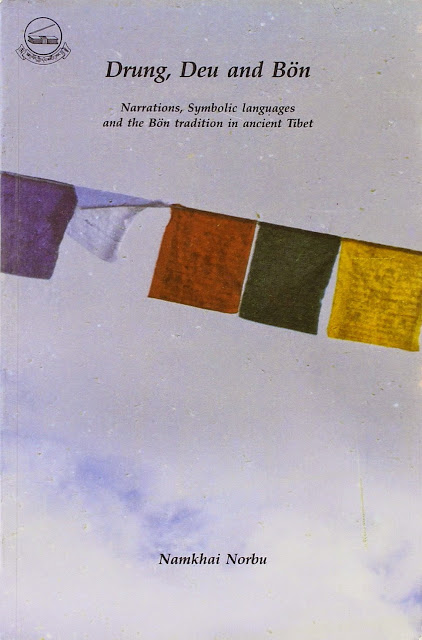 "The Mahabharata (Sanskrit Mahābhārata महाभारत, IPA: [məɦaːˈbʱaːrət̪ə]) is one of the two major Sanskrit epics of ancient India, the other being the Ramayana.....Mahābhārata, structured as a narration by Ugrasrava Sauti who was a professional story teller, to an assembly of (rishis).....Traditionally, the authorship of the Mahabharata is attributed to Vyasa. There have been many attempts to unravel its historical growth and compositional layers. The oldest preserved parts of the text are not thought to be appreciably older than around 400 BCE, though the origins of the story probably fall between the 8th and 9th centuries BCE. The text probably reached its final form by the early Gupta period (c. 4th century). The title may be translated as "the great tale of the Bhārata dynasty". According to the Mahabharata itself, the tale is extended from a shorter version of 24,000 verses called simply Bhārata."....http://en.wikipedia.org/wiki/Mahabharata

"An epic (from the Ancient Greek adjective ἐπικός (epikos), from ἔπος (epos) "word, story, poem") is a lengthy narrative poem, ordinarily concerning a serious subject containing details of heroic deeds and events significant to a culture or nation.....Some of the most famous examples of epic poetry include the Ramayana, Mahabharata, the Ancient Greek Iliad and the Odyssey, the Old English Beowulf, or the Portuguese Lusiads.....The first epics were products of preliterate societies and oral poetic traditions. In these traditions, poetry is transmitted to the audience and from performer to performer by purely oral means......The hero generally participates in a cyclical journey or quest, faces adversaries that try to defeat him in his journey and returns home significantly transformed by his journey. The epic hero illustrates traits, performs deeds, and exemplifies certain morals that are valued by the society the epic originates from."....http://en.wikipedia.org/wiki/Epic_poetry 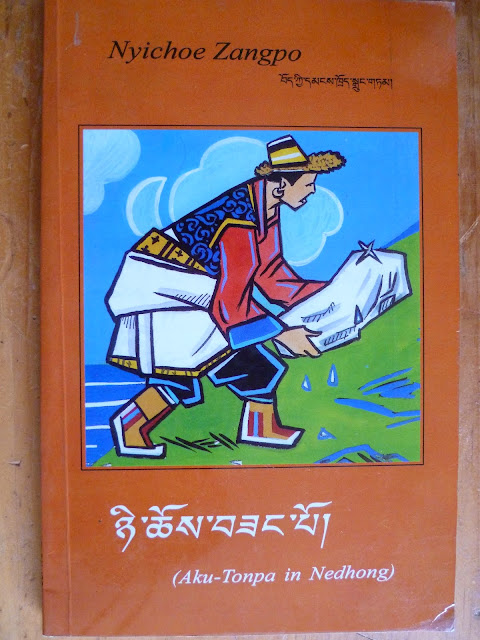 Aku Tonpa Stories....Folk Tale of Ancient Tibet ...A khu sTon pa (Akhu Tonpa).....Tibetans' natural skepticism is implicit in the tales of Agu (the name is derived from akhu, meaning “uncle") Tonpa....Tibet 's Nasreddin?......Aku-Tonpa is one of the most popular folk heroes in Tibetan folklore. His adventures are passed from generation to generation orally. Written material on the subject is very rare, especially in English. His exploits are full of laughter and humour......Aku-Tonpa was sent by Lord Chenresig (protector deity of Tibet) to teach the Tibetan art of being shrewd and witty. He is known throughout Tibet under same but little different names like Aku-Tonpa, Aku-Chang etc....... 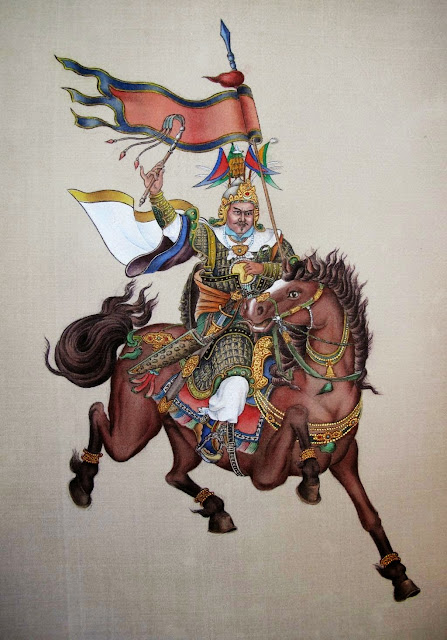 Gesar of Ling....The Epic of King Gesar (pron.: /ˈɡɛzər/ or /ˈɡɛsər/; Standard Tibetan: གེ་སར་རྒྱལ་པོ, Ge-sar rGyal-po, "King Gesar"; Mongolian: Гэсэр Хаан, Geser Khan, "King Geser"), also spelled Geser (especially in Mongolian contexts) or Kesar (/ˈkɛzər/ or /ˈkɛsər/), is an epic cycle, believed to date from the 12th century, that relates the heroic deeds of the culture hero Gesar, the fearless lord of the legendary kingdom of Ling (Standard Tibetan: gLing). It is recorded variously in poetry and prose, chantfable being the style of traditional performance, and is sung widely throughout Central Asia. Its classic version is to be found in central Tibet. Some 100 bards of this epic (sgrung: lit."tale") are still active today in the Gesar belt of China, Tibetan, Mongolian, Buryat, and Tu singers maintain the oral tradition and the epic has attracted intense scholarly curiosity as one of the few oral epic traditions to survive as a performing art. Besides stories conserved by such Chinese minorities such as the Bai, Naxi, the Pumi, Lisu, and the Yugur peoples, versions of the epic are also recorded among the Burushaski-speaking Burusho of Hunza and Gilgit, the Kalmyk and Ladakhi peoples, in Baltistan, in Sikkim, Bhutan, Nepal, and among various Tibeto-Burmese, Turkish, and Tunghus tribes. The first printed version was a Mongolian text published in Beijing in 1716.....http://en.wikipedia.org/wiki/Epic_of_King_Gesar

Homer (pron.: /ˈhoʊmər/; Ancient Greek: Ὅμηρος, Hómēros) is the author of the Iliad and the Odyssey, and is revered as the greatest of ancient Greek epic poets. These epics lie at the beginning of the Western canon of literature, and have had an enormous influence on the history of literature. When he lived is unknown. Herodotus estimates that Homer lived 400 years before Herodotus' own time, which would place him at around 850 BC, while other ancient sources claim that he lived much nearer to the supposed time of the Trojan War, in the early 12th century BC. Modern researchers appear to place Homer in the 7th or 8th centuries BC.....http://en.wikipedia.org/wiki/Homer

The Shahnameh (pronounced [ʃɒːhnɒː'mɛ]) or Shah-nama (Persian: شاهنامه‎ Šāhnāmeh, "The Book of Kings") is a long epic poem written by the Persian poet Ferdowsi between c. 977 and 1010 AD and is the national epic of the Iranian cultural continent. Consisting of some 60,000 verses, the Shahnameh tells mainly the mythical and to some extent the historical past of (Greater) Iran from the creation of the world until the Islamic conquest of Persia in the 7th century. The work is of central importance in Persian culture, regarded as a literary masterpiece, and definitive of ethno-national cultural identity of Iran.....http://en.wikipedia.org/wiki/Shahnameh

The Epic of Gilgamesh, an epic poem from Mesopotamia, is amongst the earliest surviving works of literature. The literary history of Gilgamesh begins with five independent Sumerian poems about 'Bilgamesh' (Sumerian for Gilgamesh), king of Uruk. Four of these were used as source material for a combined epic in Akkadian. This first, "Old Babylonian" version of the epic dates to the 18th century BC and is titled Shūtur eli sharrī ("Surpassing All Other Kings"). Only a few fragments of it survived. The later, Standard Babylonian version dates from the 13th to the tenth centuries BC and bears the title Sha naqba īmuru ("He who Saw the Deep"). Fragments of approximately two thirds of this longer, twelve-tablet version have been recovered. Some of the best copies were discovered in the library ruins of the 7th-century BC Assyrian king Ashurbanipal......http://en.wikipedia.org/wiki/Epic_of_Gilgamesh

"Originally the word Bonpo meant someone who invoked the gods and summoned the spirits. Thus a Bonpo was an expert in the use of mantra and magical evocation. Mantra or ngak (sngags) is sound and sound is energy. Mantra is the primordial sound that calls the forms of all things into being out of the infinite potentiality of empty space which is the basis of everything. Sound or word has a creative power. But this term Bonpo in ancient times appeared to cover a number of different types of practitioner, whether shaman, magician, or priest. Here there seems to be a strong parallel of the role of the Bonpo in ancient Tibet with that of the Druid in ancient pre-Christian Europe. Just as the Druidic order was divided into the three functions of the Bards, the Vates, and the Druids, who were singers, soothsayers, and magicians respectively, so the ancient pre-Buddhist kingdom of Tibet was said to be protected by the Drung (sgrung) who were bards and singers of epics, the Deu (lde'u) who were soothsayers and diviners, and the Bonpo (bon-po) who were priests and magicians. Another archaic term closely related to Bonpo was Shen or Shenpo (gshen-po), and this term may have originally designated the shaman practitioner in particular. The Shen system of practice was transmitted through family lineages, especially in Western and Northern Tibet, then known as the country of Zhang-zhung, so that Shen also came to designate a particular ancient clan or tribe.".....http://vajranatha.com/articles/traditions/bonpo.html?start=1

"The Mahabharata (composed between 300 BC and 300 AD) has the honor of being the longest epic in world literature, 100,000 2-line stanzas (although the most recent critical edition edits this down to about 88,000), making it eight times as long as Homer's Iliad and Odyssey together, and over 3 times as long as the Bible (Chaitanya vii). According to the Narasimhan version, only about 4000 lines relate to the main story; the rest contain additional myths and teachings. In other words, the Mahabharata resembles a long journey with many side roads and detours."....http://larryavisbrown.homestead.com/files/xeno.mahabsynop.htm

"The songs of the mahasiddhas, known as dohas, are rich in poetic imagery and speak directly to the power of imagination. The doha tradition was continued in Tibet by - Milarepa and - Drukpa Kunleg, among others. The greatest influence was exercised by the dohas of the arrowsmith Saraha, who expresses the spiritual experience ( - mahamudra) of the mahasiddhas in the following words: “Whoever understands that from the beginning mind has never existed realizes the mind of the buddhas of the three times.”......http://www.ese-an.org/m/612-mahashunya.html 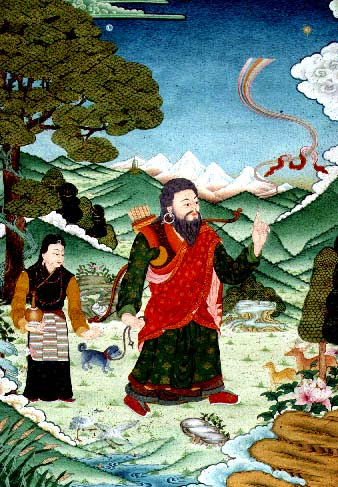 "Drukpa Kunleg ('brug pa kun legs) [1455-1529] aka The Madman of Bhutan, Kunga Legpa ('brug smyon kun dga' legs pa)..... was a great master of Mahamudra in the Buddhist tradition, as well as a famous poet, and is often counted among the Nyönpa.