KABALAH...(48E 42N)...On the Caspian Sea where the Caucasus Mountains meet the sea, in the Shirvan province is the capital Ash-Shamakha, near the famous port of Darband. In the mountains near Darband was the ancient fortress of Kabalah, on a hill, near the current Soviet border. north of the port of Baku. Location of a great castle called Kal'ah Taj. The remains of a mighty castle (kal'ah), a 'mother of castles' situated on the great Tarum River that flowed from the mountains of Tarum in northern Persia. Like Samiran, its site remains unidentified. On its walls were lions of gold. The ancient fortress of Kabalah near Darband is more than once mentioned in the campaigns of Timur. Le Strange, G...."The Lands of the Eastern Caliphate"...1966

Shirvan (Persian: شيروان‎, also Romanized as Shīrvān) is a city in and the capital of Shirvan County, North Khorasan Province, Iran....Khorasan (Persian: استان خراسان‎) (also transcribed as Khurasan and Khorassan, anciently called Traxiane during Hellenistic and Parthian times) currently names a region located in north eastern Iran, but historically referred to a much larger area east and north-east of the Persian Empire. The name Khorasan is Persian and means "where the sun arrives from." The name was given to the eastern province of Persia during the Sassanid Empire.

"Derbent (Russian: Дербе́нт; Azerbaijani: Dərbənd; Lezgian: Кьвевар; Avar: Дербенд; Lak: Чурул, Churul; Persian: دربند; Judæo-Tat: דארבּאנד/Дэрбэнд/Dərbənd) is a city in the Republic of Dagestan, Russia, located on the Caspian Sea, north of the Azerbaijani border. Often identified with the legendary Gates of Alexander, Derbent claims to be the oldest city in Russia (8th century BCE). Since antiquity, the value of the area as the gate to the Caucasus has been understood, and Derbent has archaeological structures over 5,000 years old."....http://en.wikipedia.org/wiki/Derbent 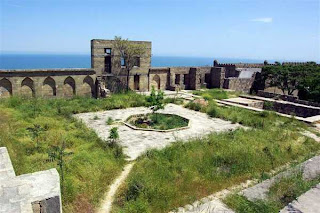 Citadel wall and the Caspian Sea.....Located in the city of Derbent, in the Republic of Dagestan......6th century CE fortress — Sassanid Dynasty architecture.

ASH SHAMAKHA....(49E..41N)...(Shemakha)..."Beyond the Kur River (Araxes), along the Caspian Sea in the Caucasus Range is the Shirvan Province with its capital of Ash-Shamakha, site of the fountain of life.. Foot of the mountains. Beautiful gardens. In the mountains of Darband was the fortress of Kabalah, on a hill." (Le Strange; 1966..pg 179)...

KHAZAR.... I noticed that your page bestquotes.html refers to the fortress Kabalah (Cabala, Qabala) which was once called "Khazar" (or so they say). I heard that this was inhabited by Khazars or Turks in the 7th century, but only temporarily. Some Khazar-Turk soldiers were buried there. It is briefly mentioned in Altstadt's History of Azerbaijan (Hoover Press) and on a website hosted in Azerbaijan (I think it's at http://www.culture.az, but I can't find the specific page right now). Findings from Kabala are contained in the History Museum of Azerbaijan, according to www.culture.az/museums/history/histor_e.htm Where else can we learn about Kabala?

Cabala is one of the oldest and distinguished towns of ancient Azerbaijan. Its name in the form of Cabalaca is firstly mentioned in the written sources of the second half of the I-st century in the "Natural History" bearing the character of the encyclopaedia by Gaius Plinius the Elder.

Gaius Plinius Secundus in his "Natural History" calls Cabala as C a b a l a c a. The Poman author writes that Cabalaca is a predominant town of Albania.

In the sources of the early Middle Ages Cabala was called as Kapalak, Kapaga, Khuala and so on. Beginning from the IV-th century Christianity was widely spread in Cabala, here was situated the episcopal pulpit (episcopacy).

In the VI-VIII-th centuries the region of Cabala was frequently raided bv Khazars. They ruled here during almost a century and made Cabala their administrative centre. The Arabians, who invaded the town later on, knew it as Cabala-Khazar. In 737 at the time of caliph Mervan's rule the Arabians repulsed the Khazars for the last time and announced their domination here.

In the period of the early Middle Ages Cabala consisted of Selbir and Kala. Both parts of the town were defenced by a common wall. The cultural strata of Selbir and Kala of the VI-VII-th centuries are not rich in archaeological materials. But in the habitable bed of the VIII-th century many constructional rests and other archaeological materials were revealed. The secret water-lines consisting of earthenware water-tubes were discovered. In the course of the archaeological excavations various hearths, tendirs, pits, sewerages were found here. All these help to imagine the mode of life of the ancient Cabala inhabitants.