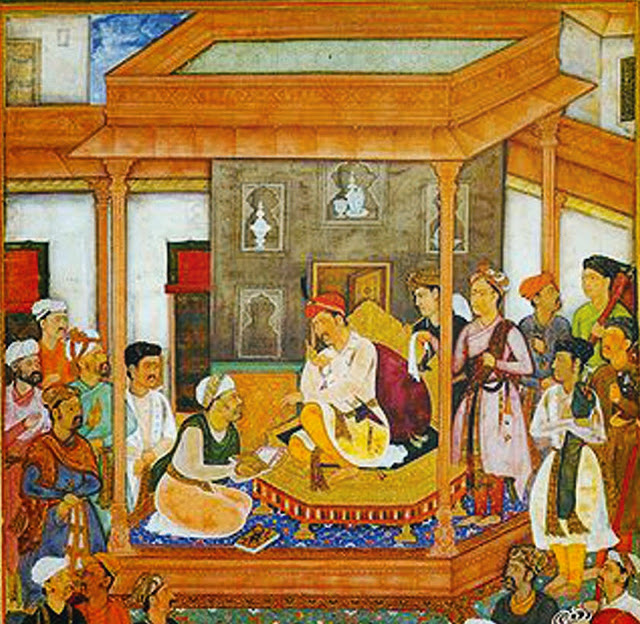 Akbar......Abu'l-Fath Jalal-ud-Din Muhammad Akbar (Persian: جلال الدین محمد أکبر ‎ - Jalāl ud-Dīn Muḥammad Akbar), also known as Shahanshah Akbar-e-Azam or Akbar the Great ( 1542 – 1605), was the third Mughal Emperor....Akbar's reign significantly influenced art and culture in the country. He was a great patron of art and architecture He took a great interest in painting, and had the walls of his palaces adorned with murals. Besides encouraging the development of the Mughal school, he also patronised the European style of painting. He was fond of literature, and had several Sanskrit works translated into Persian and Persian scriptures translated in Sanskrit apart from getting many Persian works illustrated by painters from his court....He began a series of religious debates where Muslim scholars would debate religious matters with Hindus, Jains, Zoroastrians and Portuguese Roman Catholic Jesuits. He treated these religious leaders with great consideration, irrespective of their faith, and revered them. He not only granted lands and money for the mosques but the list of the recipients included a huge number Hindu temples in north and central India, Christian churches in Goa.....

"The stories of the search for Shambhala began in the mid 1500s at the court of the Indian Mogul Emperor Akbar the Great in Delhi. At his court, Akbar encouraged art and architecture, literature and promoted religious debate across many religions. He gathered not only Hindus and others from his own empire but Christian monks and pilgrims from the west to participate in these discussions.....This priest's successor, Antonio Andrade, being much younger set out on an expedition to locate this place. He found a wealthy kingdom but no Christians. In 1926 Andrade published 'Discovery of Tibet'. It is this work which likely inspired 'Lost Horizon' the 1933 novel by James Hilton.......A visiting Jesuit priest wrote a compilation of the various stories he heard at Akbar's court and organized them into an essay along with a map."

"At Akbar's time India still reigned glorious at the centre of the civilised world, but the winds were changing and the great power of Asian lands was just beginning to reduce, under pressure from the modernity of Europe. In partial response to this shifting world, Akbar gathered scholars of all races around him, hoping to find the common basis of all religions, in order to remove the sources of religious conflict for the good of humankind. As he put it: "It now becomes clear ... that it cannot be right to assert the truth of one faith above any other ... In this way we may perhaps again open the door whose key has been lost."....http://www.bbc.co.uk/history/ancient/cultures/shangri_la_01.shtml.....Early Jesuit Travellers in Central Asia 1603-1721 by C Wessels (Book Faith India, 2002)

"Akbar was a philosopher-king who had a genuine interest in all creeds and doctrines at a time when religious persecution was prevalent throughout Europe and Asia. Understanding that cooperation among all his subjects – Muslims, Hindus, Persians, Central Asians and indigenous Indians – would be in his best interest, he even tried to establish a new religion that encouraged universal tolerance......he created an astounding library of over 24,000 volumes written in Hindi, Persian, Greek, Latin, Arabic and Kashmiri, staffed by scholars, translators, artists, calligraphers, scribes, bookbinders and readers......

"Akbar never renounced Islam, but he studied and supported other religions, including Hinduism, Buddhism, Judaism, and Christianity. Though illiterate, Akbar amassed an enormous library. He was read to by his royal assistants and discussed religion and other forms of literature with scholars. He also persuaded religious devotees of other faiths to engage in discussion with him. These discussions were continued by a small group of courtiers as doctrines and ceremonies known as the Divine Faith (Din-e Ilahi)."....http://www.artic.edu/aic/collections/exhibitions/Indian/resource/1016

"The reign of Akbar bears a strange resemblance to that of Asoka. Indeed, the likeness between Akbar and Asoka is one of the most remarkable phenomena in history. They were separated from each other by an interval of eighteen centuries; the main features of their respective lives were practically the same. Asoka was putting down revolt in the Punjab when his father died; so was Akbar. Asoka was occupied for years in conquering and consolidating his empire; so was Akbar. Asoka conquered India to the north of the Nerbudda; so did Akbar. Asoka was tolerant of other religions; so was Akbar. Asoka went against the priests; so did Akbar. Asoka taught a religion of his own; so did Akbar. Asoka abstained from flesh meat; so did Akbar. In the end Asoka took refuge in Buddha, the law, and the assembly. In the end Akbar recited the formula of Islam: "There is but one God, and Mahomet is his prophet.".....[Asoka was an illustrious king of the Maurya dynasty in India, who died about B.C. 225. He did much for the advancement of Buddhism, and has been called the "Buddhist Constantine." ]....http://history-world.org/mongolakbar.htm

"Akbar himself fostered tolerance for all religions, which was known as his policy of sulh-i-kull (universal tolerance) (Davies, 317). Clearly interested in religious issues, he started to invite scholars to court to discuss theological topics. Initially, only Muslims took part, but later Akbar invited Jews, Parsees (Zoroastrians), Hindus, Buddhists, Jains, and Christians, including Jesuits from Goa. At his new capital, he built the 'ibadat-khana (house of worship) to accommodate scholarly exchanges."... http://www.newworldencyclopedia.org/entry/Akbar_the_Great

"As being a true humanist, he showed great respect to other religions and he stopped the visiting taxes to Hindu’s holy site of Mathura and all other pilgrim taxes within the Empire’s borders in 1563.....Akbar’s religious tolerance and intellectual curiosity were among his initial ideas of governance and were the keys to the devotion of the conquered lands Akbar examined the principles of Hinduism and Buddhism based on the law karma and Confucius. He tried to understand the aims of Zoroastrians in Persia, Jains with the belief of causing no harms to living things which consequently supported vegetarianism. He also admired the idea of Sikhism which identified God beyond religion. The matter was to find and walk through God’s way no matter what the difference was between human beings. He met with Jewish traders and Christian Europeans with the hope of imposing their religion."....http://www.tajmahal.com/5/info/Akbar.htm