"Tibetan translators worked under a top-down system in which royal edicts decreed the correct Tibetan word to be used for every Buddhist Sanskrit term. ...One of the problems for the early translators was what to do with certain important and powerful words that came from the pre-Buddhist culture of Tibet....One of the most powerful and resonant words in pre-Buddhist Tibet was yungdrung (g.yung drung). It was a the key terms for the old royal religion, the mythological backdrop to the kingly lineage of the Tibetan Empire. For example, the inscription of the tomb of Trisong Detsen has the line: “In accord with the eternal (yungdrung) customs (tsuglag), the Emperor and Divine Son Trisong Detsen was made the ruler of men.”... we see “the eternal dharma” (g.yung drung chos) in many Dunhuang manuscripts. Translators of Chinese Buddhist scriptures into Tibetan used it to translate nirvana. Translators of Sanskrit Buddhist scriptures used it to translate the Sanskrit samyak, meaning “correct” or “perfect”, as well as various Sanskrit terms meaning “eternal”. This messy scene begins to look more like the chaos that bedevils contemporary translation efforts.. .......Buddhism and Bön III: what is yungdrung?....http://earlytibet.com/2008/04/30/buddhism-and-bon-iii-what-is-yungdrung/ 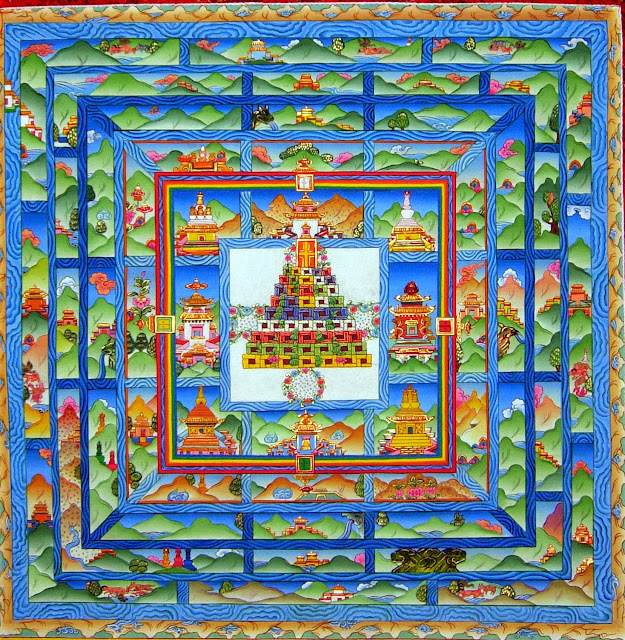 ".....the country of Olmo Lung-ring where Tonpa Shenrab descended from the celestial spheres and took up incarnation among human beings as an Iranian prince. The mysterious land of Olmo Lung-ring ('ol-mo lung-rings) or Olmoling ('ol-mo'i gling) is said to be part of a larger geographical region to the northwest of Tibet called Tazig (stag-gzig, var. rtag-gzigs), which scholars identify with Iran or, more properly, Central Asia where in ancient times Iranian languages such as Avestan and later Sogdian were spoken. According to the "gZer-mig" the traditional etymology of the name Olmo Lung-ring is as follows: '"ol" means "unborn", "mo" "undermined", "lung" "the prophetic words of Shenrab", and "rings" "everlasting compassion". According to the "gZi-brjid", Olmo Lung-ring was also known as Shambhala in Sanskrit and it continues to be known by this name among Tibetan Buddhists even today. Moreover, it is said that in ancient times it encompassed fully one-third of the known world a statement which could apply to the historical Persian empire."....OLMO LUNG-RING: THE IMPERISHABLE SACRED LAND....by Vajranatha

"......they put the birth of Tonpa Shenrab in distant Tazig, a fabulous land of legend, which recalled the Persian empire which the Tibetans much admired in the seventh century. ".........OLMO LUNG-RING: THE IMPERISHABLE SACRED LAND....by Vajranatha

"Of all the patterns the Swastika pattern is also used. Many consider it to be a Hindu symbol. However the Swastika is an ancient Aryan symbol of the sun, and Zoroastrians we revere the sun as a form of fire energy...".....http://tenets.zoroastrianism.com/pcustm33.html

"The Sanskrit term Swastika has been in use in English since 1871, replacing gammadion (from Greek γαμμάδιον). The Tibetan swastika is known as g.yung drung......The genesis of the swastika symbol is often treated in conjunction with cross symbols in general, such as the sun cross of pagan Bronze Age religion. ...The earliest swastika known has been found from Mezine, Ukraine. It is carved on late paleolithic figurine of mammoth ivory, being dated as early as about 10,000 BC. It has been suggested this swastika is a stylized picture of a stork in flight. 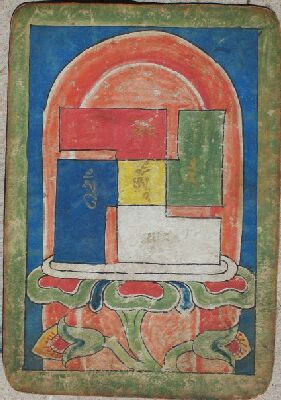 "In the Zoroastrian religion of Persia, the swastika was a symbol of the revolving sun, infinity, or continuing creation.... All Jain temples and holy books must contain the swastika and ceremonies typically begin and end with creating a swastika mark several times with rice around the altar. Jains use rice to make a swastika in front of statues and then put an offering on it, usually a ripe or dried fruit..."

"The swastika (卐) (Sanskrit: स्वस्तिक) is an equilateral cross with four arms bent at 90 degrees.The earliest archaeological evidence of swastika-shaped ornaments dates back to the Indus Valley Civilization, Ancient India as well as Classical Antiquity. Swastikas have also been used in various other ancient civilizations around the world. It remains widely used in Indian religions, specifically in Hinduism, Buddhism, and Jainism, primarily as a tantric symbol to evoke shakti or the sacred symbol of auspiciousness. The word "swastika" comes from the Sanskrit svastika - "su" meaning "good," "asti" meaning "to be," and "ka" as a suffix. The swastika literally means "to be good". Or another translation can be made: "swa" is "higher self", "asti" meaning "being", and "ka" as a suffix, so the translation can be interpreted as "being with higher self".

"One of the most tangible expressions of Nazi interest in Tibet was the party`s adoption of its deepest and most mystical of symbols-the swastika.

"The swastika is one of mankind's oldest symbols, and apart from the cross and the circle, probably the most widely distributed. It is shown on pottery fragments from Greece dating back to the eighth century BC. It was used in ancient Egypt, India and China. The Navaho indians of North America have a traditional swastika pattern. Arab-Islamic sorcerers used it. In more recent times, it was incorporated in the flags of certain baltic states.

The idea for the use of the swastika by the Nazis came from a dentist named Dr. Friedrich Krohn who was a member of the secret Germanen order. Krohn produced the design for the actual form in which the Nazis came to use the symbol, that is reversed, spinning in an anti-clockwise direction. As a solar symbol, the swastika is properly thought of as spinning, and the Buddhists have always believed the symbol attracted luck. The Sanskrit word "svastika" means good fortune and well being. According to Cabbalistic lore and occult theory, chaotic force can be evoked by revers- ing the symbol. And so the symbol appeared as the flag of Nazi Germany and the insignia of the Nazi party, an indication for those who had eyes to see, as to the occult nature of the Third Reich.

"From The Book of the Hopi by Frank Waters......The swastika symbol represents the path of the migrations of the Hopi clans.......The center of the cross represents Tuwanasavi or the Center of the Universe which lay in what is now the Hopi country in the southwestern part of the US. Tuwanasavi was not the geographic center of North America, but the magnetic or spiritual center formed by the junction of the North-South and the East-West axws along which the Twins sent their vibratory messages and controlled the rotation of the planet." 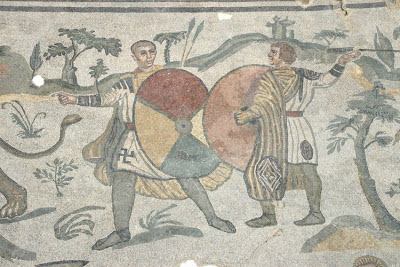 "Villa Romana del Casale is a Roman villa built in the first quarter of the 4th century and located about 3 km outside the town of Piazza Armerina, Sicily, southern Italy. Containing the richest, largest and most complex collection of Roman mosaics in the world, it is one of 44 UNESCO World Heritage Sites in Italy.

"Sotuknang, the Hopi Heart of the Sky God.....This Anasazi swastika symbolizing the land also mirrors the sky, specifically the constellation Orion. The oblique line forming a plumed serpent corresponds to the Little Colorado River, which flows into the Grand Canyon.... the spiral glyph signifies the gate through which Masau’u descends to his house located just north of the two great rivers’ convergence. This is the grand Sipapu, whence the people emerged onto the Fourth World where they now live. On a personal level this is also the passage way through which the spirit will descend on its afterlife journey. Equidistant between the plumed serpent and the spiral is an image we have not yet discussed. A V-shaped artifact points downward, enigmatically radiating its numinous power. If we look at a sky chart in the region of Orion, we notice that the V-shaped Hyades of the constellation Taurus lies adjacent to Orion in the same relative positioning that we find on the petroglyph. The relationship between Taurus, in particular the fiery red star Aldebaran, and Sotuknang, the Heart of the Sky God, is an enduring theme in Hopi mythology....Hence, on this one petroglyph panel at Homol’ovi we unequivocally find elements that iconographically link both the celestial and the terrestrial. On a balance between these two forces, the forces of the sky (or the Above) represented by Sho’tukünuñwa [Sotuknang], and those of the Below represented by Pa’lülükoñ [Palulukang], the Hopi universe rests. Symbolically, the two elements are brought into contact in the making of medicine water [during the Snake Ceremony in August], where the ray of sunlight flashed into the bowl signifies the Above, and the water itself, the Below.” .....http://www.bibliotecapleyades.net/esp_orionzone_13.htm

"The Swastika symbol was widely used by Native Americans from Ohio through the Southwest. For the Hopi, it was a symbol of the wandering Hopi clan; to the Navajos it represented a whirling log (tsil no'oli') used in healing rituals. According to some scholars, the swastika was a common symbol for the land, especially the center of the land, in Anasazi, Sinagua, Mogollon cultures and other American Indian Cultures."....http://www.brianlarkin.org/special/4corners/cdcnm/index.htm