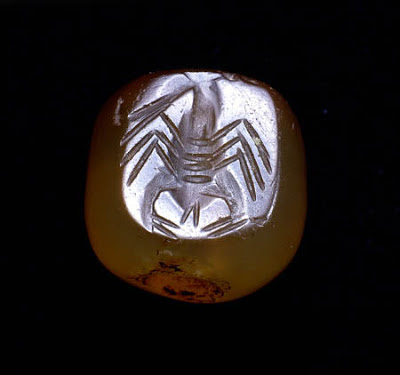 "The Sasanian Dynasty was finally overthrown by Islamic armies in 641 C.E., only 19 years after the Sasanians had nearly defeated the Byzantine empire at Constantinople....Because there have been few archaeological surveys or scientific excavations in the region of the Sasanian empire, little material evidence has come to light from this period of Iran's history. Some building ruins have been found, the most interesting of which are several domed pavilions, probably used as temples, in which worship centered on fire, a symbol of the god Ahura Mazda's light and energy. Numerous Sasanian coins have been found as far away as China, and other material remains include small objects such as the animal seals shown here. These seals date from about the fifth century C.E. Shown here are a rabbit, a bird, a scorpion and a stag carved in various kinds of stone."....University of Southern California Archaeological Research Collection.....Commentary by Marilyn J. Lundberg.

"Kalapa Valley......Scorpion Seal Retreat Building.....
In 2004, Sakyong Mipham Rinpoche requested that a structure be built for the lineage of Sakyongs in Kalapa Valley to be used for the retreat described by his father the Druk Sakyong, Chögyam Trungpa Rinpoche, in the Scorpion Seal of the Golden Sun root text. The text is considered one of the most profound of the Druk Sakyong’s Shambhala teachings, and is the basis for the Werma Sadhana, a central practice for advanced students within the Shambhala community. Sakyong Mipham Rinpoche was to be the first person to do the Scorpion Seal retreat.".....http://kalapavalley.shambhala.org/tenno.php 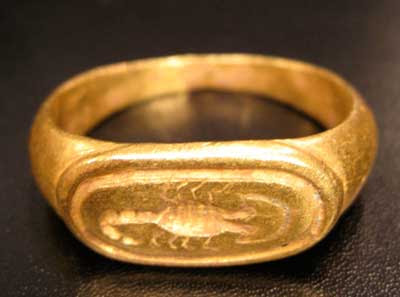 "The design for the Scorpion Seal retreat building, also referred to as the Tenno Retreat building, was conceived by designer, architect, and feng shui consultant Gina Stick as a marriage of k’an-yu or feng shui with a Shambhala inspired sacred architecture. The building was strategically designed to gather and focus the land potential of the valley into the retreat building. Sacred architecture derives much of its power from the surrounding landform, accessed through strategic site selection and placement, and building design."...http://kalapavalley.shambhala.org/tenno.php.....
The design concept for the building was inspired by the Great Eastern Sun Vajra Assembly talks of the Druk Sakyong in which he describes the Seat of the Universal Monarch and the dawning of the Great Eastern Sun. Architecturally it was developed to invite the primal simplicity of the central drala or energy invoked in the Werma Sadhana, Shiwa Okar, and to empower the practitioner with the enriching stability of the Rigden King, an expression of Universal Monarch within the Shambhala Buddhist lineage......
In 2005 the first phase construction of the building was completed, and the Sakyong entered his Scorpion Seat retreat. The Sakyong communicated that he considered the structure - though unfinished - to be our first truly Shambhalian building, and that the final elements of the Rigden Abhisheka transmission arose auspiciously from that retreat......
In October 2008, the Sakyong hosted a powerful retreat gathering of acharyas at Kalapa Valley to further teach on the Scorpion Seal retreat in preparation for Scorpion Seal Assemblies to be offered to the community. In preparation for the Acharaya retreat, a second phase of construction was initiated, and some of the exterior siding of the building was installed. The balance of the exterior is still incomplete and in danger of decay. The entry system - stairs and veranda - are not yet built. Heraldry for the building - designed as armor and to reflect and enhance the luminosity of the Great Eastern Sun - is in a schematic phase. The site needs substantial clean up from construction; grading; and finish landscaping to restore it to a natural state.".....http://kalapavalley.shambhala.org/tenno.php .....

"Scorpion Seal from Babylon and A Scorpion Harp from UR ( an important Sumerian city-state in ancient Mesopotamia....The city dates from the Ubaid period circa 3800 BC, and is recorded in written history as a City State from the 26th century BC, its first recorded king being Mesh-Ane-pada.)

"The Sasanian Dynasty ruled in the area of what is now Iran from 224-651 C.E. The first king, Ardashir I, overthrew the Parthians, who had ruled Iran from 247 B.C.E. through 224 C.E. Ardashir and his successors built an empire that covered much of the area between what is now Iraq and India. .....
The official religion of the empire was Zoroastrianism, whose adherents believed in a creator god called Ohrmazd or Ahura Mazda. Zoroastrianism was founded by a Persian prophet named Zoroaster or Zarathustra. It is still practiced today in India by the Parsis. Other religions were practiced in the empire, including Christianity and Manichaeanism. The latter was founded by the prophet Mani in the 3rd century C.E. but was considered a dangerous heresy by the Zoroastrians. .....
The Sasanians were involved in long-distance trade, controlling the seagoing routes through the Arabian and Red Seas. They exported such goods as silver and gold vessels, cut glass, and brocades made from Chinese silk. The Sasanian rulers carried out military campaigns against Roman Syria in the 3rd century C.E., and against Syria, Palestine and Egypt in the early 7th century. The Sasanian Dynasty was finally overthrown by Islamic armies in 641 C.E., only 19 years after the Sasanians had nearly defeated the Byzantine empire at Constantinople. .....
Because there have been few archaeological surveys or scientific excavations in the region of the Sasanian empire, little material evidence has come to light from this period of Iran's history. Some building ruins have been found, the most interesting of which are several domed pavilions, probably used as temples, in which worship centered on fire, a symbol of the god Ahura Mazda's light and energy. Numerous Sasanian coins have been found as far away as China, and other material remains include small objects such as the animal seals shown here".....http://www.usc.edu/dept/LAS/wsrp/educational_site/uscarc/sasanian_seals.shtml

Tibet's poet-saint, Jetsun Milarepa (1040-1143) did not begin as such.  In his youth, Milarepa studied black magic in order to seek revenge on the relatives who abandoned him to a life of bitter poverty following the death of his parents.  According to his student Rechugpa (1084-1161) he invoked a giant black scorpion to attack his uncle's house

A scorpion wheel charm is associated with a (Tibetan Buddhist) Nyingma Yamantaka practice.

In the fire puja of Vajradaka (Tib.: Dorje Khadro) who is a fierce and wrathful deity invoked to purify negative actions, black sesame seeds are used to represent problems and regrets.  They are arranged into the shape of a scorpion which is then consumed by fire as practitioners visualize all physical, psychological, emotional hindrances being annihilated compassionately by Dorje Khadro who joyously

"The Gesture Warding off Evil (Tarjani Mudra) with forefinger and little finger outstretched."....http://www.buddhanet.net/mudras.htm

"The fascination or threatening gesture (Skt. tarjini mudra) consists of a fist with forefinger and little finger extended; it is called the "forefinger-scorpion gesture" (Tib. Digzub Chagya.) Legend says that when the apostate king Langdarma was attempting to suppress Buddhism in Tibet, mahasiddha Nubchen Sangyé Yeshé terrified him by using the gesture to create a scorpion apparition "as big as nine yaks" that appeared above the king. 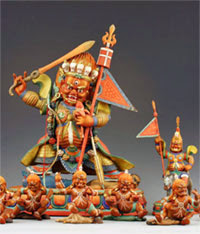 "Begtse is a Mongol war god that legend says, converted to Buddhism in the 16th-century at the sight of the Dalai Lama's transformation into Chenrezi, the Bodhisattva of Compassion.  As a consequence, he became a symbol of pacification and the last in the series of 8 (or 9) Tibetan Buddhist dharma protectors or Dharmapalas.....He is represented with all the ornaments of the Dharmapala, brandishing a sword in his right hand, the handle of which is in the shape of a scorpion. His left hand holds the orange heart of an enemy near his mouth, clutching at the same time a bow and an arrow. He tramples upon the corpse of a man with his left foot and the carcass of a horse with his right foot. His three eyes are full of fury directed at the enemies of the dharma."...

"Scorpion in Tibetan is digpa ratsa means negative- , or harmful action and also, menace.  As in the symbolism of Beg-tse, it is evocative of the Buddha-dharma's power to transmute bad, even deadly, circumstances into beneficial ones.  It is therefore used as a seal by the Vajrayana or tantric Buddhist masters who can effect transformations.  The Ngak'chang Rinpoche has a scorpion seal, and the late Chögyam Trungpa Rinpoche’s red scorpion seal may sometimes be seen on his calligraphies."

"A stylized scorpion is often used as a seal by Tantric Lamas. It has 3 eyes, 8 five-segmented legs, and a tail with nine joints. The mathematics gives 52, the number of weeks in a year. It is coloured blue, green and red to stand for 3 of the five traditional elements: space/ether, air, and fire"

"Chogyam Trungpa wrote a number of Shambhala texts throughout his life, and also received a number of them as terma......Scorpion Seal of the Golden Sun.....Received during the 1980 Seminary in Europe. A long and a short version exist....Hayward, Jeremy. Warrior-King of Shambhala: Remembering Chogyam Trungpa Wisdom Publications: 2007. ISBN 0-86171-546-2 pgs 235....

"In 1980 and 1981, the Druk Sakyong, Chogyam Trungpa Rinpoche, received the terma text The Scorpion Seal of the Golden Sun. As Acharya John Rockwell describes, “It was rather secret, a bit ahead of our times.” Many people were given the Werma sadhana at Kalapa Assemblies, but few realized that this practice was based on a terma. While the Druk Sakyong spoke about the Scorpion Seal to his students, and clearly stated that he wanted the community to aspire to practice it, this never happened in his lifetime. “It has been a hidden treasure,” Acharya Rockwell points out. “There has been a long deliberation about how to best open these teachings, what it would mean for people to be ready, and how they would engage on the path to the retreat that’s outlined in the terma text.”.....http://shambhalatimes.org/2009/07/02/scorpion-seal-opens/

In January 2005, Sakyong Mipham entered the Scorpion Seal Retreat for the first time. As he wrote from that retreat, “On his last retreat, the Druk Sakyong himself primarily practiced the Werma sadhana, in hopes of then accomplishing the Scorpion Seal retreat. Since this never occurred, the responsibility has fallen to me. I am the first individual to do this retreat, the culmination of all of the Vidyadhara’s terma.”....http://shambhalatimes.org/2009/07/02/scorpion-seal-opens/