His role as a seminal Shambhalist was in bringing to the attention of the scholarly world a basic outline of the Buddhist concept of Shambhala and inspiring further investigations by future generations of Shambhalists......The tragedy of Csoma's quest is he was wrong in his life-long belief that the Uighurs were somehow connected with the origins of the Hungarian people. The irony is that later Shambhalists would identify the ancient Uighur kingdom of Khocho, centered around the Turfan Depression, as one of the prime candidates for the physical location of Shambhala, which Csoma believed to be somewhere to the west. ….

"Sándor Csoma de Kőrös (1784-1842), born Csoma Sándor (Csoma being the family name) was a Hungarian philologist and Orientalist, author of the first Tibetan-English dictionary and grammar book. He was called Phyi-glin-gi-grwa-pa in Tibetan, meaning "the foreign pupil" and was given the title of Bosatsu or Boddhisatva (Buddhist sainthood) by the Japanese in 1933.He was born in Kőrös, Grand Principality of Transylvania (today Chiuruş, Romania). The Magyar ethnic group, the Székelys, to which he belonged believed that they were derived from a branch of Attila's Huns who had settled in Transylvania in the fifth century. Hoping to study the claim and to find the place of origin of the Székelys and the Magyars by studying language kinship, he set off to Asia in 1820 and spent his lifetime studying the Tibetan language and Buddhist philosophy. Csoma de Kőrös is considered as the founder of Tibetology. He was said to have been able to read in seventeen languages. He died in Darjeeling while attempting to make a trip to Lhasa in 1842 and a memorial was erected in his honour by the Asiatic Society of Bengal." 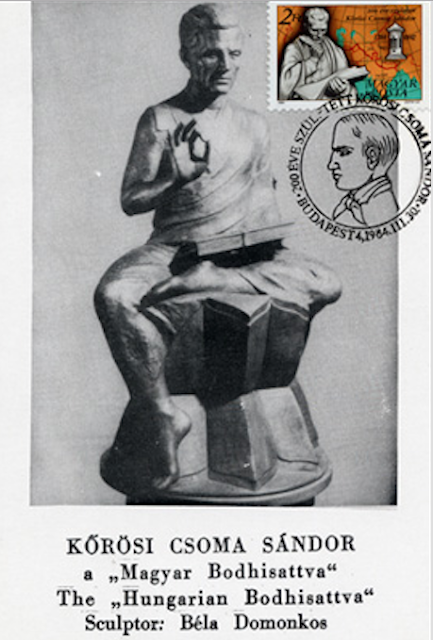 "Csoma de Köros was a full-blown eccentric who devoted his entire life to the pursuit of arcane knowledge. As the Russian Shambhalist Madame Helena Blavatsky noted, "a poor Hungarian, Csoma de Körös, not only without means, but a veritable beggar, set out on foot for Tibet, through unknown and dangerous countries, urged only by the love of learning and the eager wish to shed light on the historical origin of his nation. The result was that inexhaustible mines of literary treasures were discovered." Among the written works unearthed were the first descriptions of the Buddhist realm of Shambhala to reach the West.".....http://www.shambhala.mn/Files/csoma.html

"Alexander Csoma conjectured that S'ambhala must have been the capital of a kingdom ihat flourished in the early centuries of Christ and that S'ridhdnya Kataica was the Cuttak of modern Orissa. The last of tlic kings of S'ambhala is, however, not mentioned in the Ju!a Tantra. It is stated that a king named Samudra Vijaya arrived at S'ambhala in 618 A.D., and shortly after that the period called, in the Tibetan chronology, (Me-kha-rgya-Mtsho*, commenced. It is also stated that in 622 A.D., at Makha (Mecca) the Muhamadan religion was established. From what can be gathered from Tibetan histories and works on Kdla Chakrait may be conjectured that this S'ambhala, very probably, was the capital of the Bactrian Empire of the Eastern Greeks who had embraced Buddhism. It is also conjectured that the modern city of Balkh must have been the site of their latest capital. The name of King Menander {Minendra) who erected a very lofty chaiti/a has been mentioned by the Kashmirian poet Ksomendra, in Avaddna Kalpalatd, a work that was finished iu about 1035 A.D."....http://archive.org/stream/grammaroftibetan00dass/grammaroftibetan00dass_djvu.txt 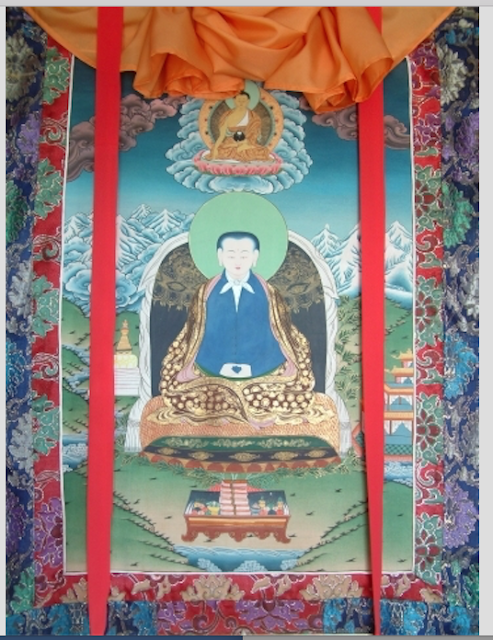 Csoma's tanka at the exhibition

"In the East the Japanese buddhist were first to recognize the great significance and scientific value of Alexander Csoma de Kőrös' work. Being acknowledged by them as a Hungarian saint of buddhism, he was given the name "Csoma Bosatsu, the Bodhisattva of the Western World" on 22 frebruary 1933, at a religious ceremony held at the assembly hall of Taishyo Buddhist University in Tokyo. By this extraordinary honour they wished to acknowledge his work exploring Buddhism in western scientific spirit, together with his saintly life and enduring efforts. He was the first Westerner to receive this recognition. His statue depicting him in meditation posture was ceremonially placed in the Emperor's Museum in the presence of the entire staff." 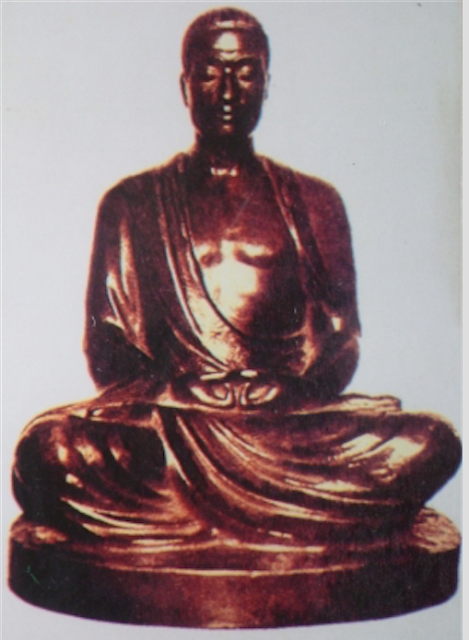 "In March of 1821, Csoma left the city in Persian garb, leaving his notes and books in Teheran, intending to spend the winter months in Bokhara. However, the Central Asian war prevented him from staying for months in Meshed, and when he arrived in Bokhara in the middle of November, he had to leave the city after five days. He traveled with a caravan to the southern Balkh, and from there he went to Bamiyan, Kabul and Peshawar....On July 16 he met the British officer William Moorcroft, 10 whom he accompanied to Leh, where they stayed together until the end of August......This encounter triggered a decisive change in the life of Csoma. He received from Moorcroft a copy of the very first book on Tibet, the Alphabetum Tibetanum by Agostino Antonio Giorgi, 11 and it was Moorcroft who spurred Csoma to his Tibetan studies. Csoma – perhaps hoping to find new sources about the history of ancient Hungarians in the Tibetan literature that was an absolute terra incognita at that time, unable to continue his journey to Central Asia – stayed in Leh and began to learn Tibetan with the help of Persian as an intermediate language."......http://csoma.mtak.hu/en/csoma-elete.htm

"Menander I Soter "The Saviour" (known as Milind in Indian sources) was the Indo-Greek king (155 BC-130 BC) who established a large empire in the South Asia and became a patron of Buddhism.....Menander was born in the Caucasus, and was initially a king of Bactria.

"....writes Elaine Brooks in her 1987 In Search of Shambhala, "Alexander Csoma de Koros, a Hungarian scholar, set off alone to search for the origins of the Hungarian people. Eventually he reached Tibet where he spent the rest of his life studying in monasteries, translating texts on both the Kalachakra and Shambhala. So the first news of Shambhala reached the West." In fact Csoma never reached what is now known as Tibet, although Ladakh where he did study was sometimes called Middle Tibet or Western Tibet, and it was certainly an area heavily influenced by Tibetan culture. And he spent not the rest of his life but roughly four years studying in the monasteries of Yangla and Kanum. In any case, his role as a seminal Shambhalist was in bringing to the attention of the scholarly world a basic outline of the Buddhist concept of Shambhala and inspiring further investigations by future generations of Shambhalists......The tragedy of Csoma's quest is he was wrong in his life-long belief that the Uighurs were somehow connected with the origins of the Hungarian people. The irony is that later Shambhalists would identify the ancient Uighur kingdom of Khocho, centered around the Turfan Depression, as one of the prime candidates for the physical location of Shambhala, which Csoma believed to be somewhere to the west. If the Uighur kingdom of Khocho was synonymous with Shambhala then Csoma was indeed on a quest to reach the mystical Buddhism realm; lost in his monomania about the origins of the Hungarians he himself was simply not aware of it. Or perhaps the land of the Uighurs had become his own personal Shambhala, the ultimate repository of his most deeply felt yearnings and unfulfilled dreams." ....www.shambhala.mn Files csoma.html