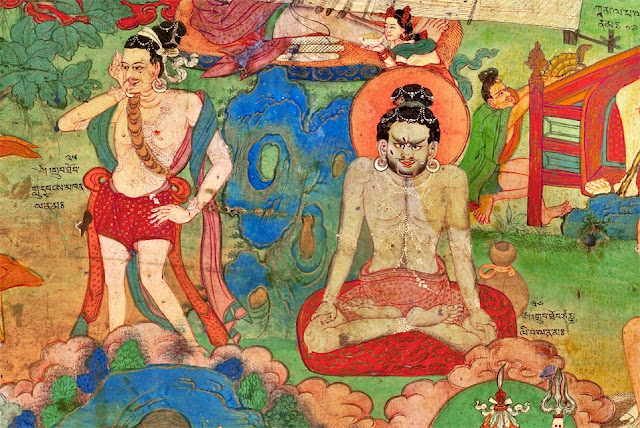 "By convention there are 84 Mahasiddhas in both Hindu and Tibetan Buddhist traditions, with some overlap between the two lists. The number is congruent with the number of siddhi or occult powers held in the Indian Religions......Each Mahasiddha has come to be known for certain characteristics and teachings, which facilitates their pedagogical use...... The sadhana of Dream Yoga as practiced in Dzogchen traditions such as the Kham, entered the Himalayan tantric tradition from the Mahasiddha, Ngagpa and Bonpo.....Tibetan masters of various lineages are often referred to as mahasiddhas. Among them are Marpa, the Tibetan translator who brought Buddhist texts to Tibet, and Milarepa.."......http://en.wikipedia.org/wiki/Mahasiddha#Different_Mahasiddha_traditions

"....But most important historically for the development of Buddhism in Tibet was the Mahasiddha Tradition that evolved in North India in the early Medieval Period (3-13 cen. AD). Philosophically this movement was based on the insights revealed in the Mahayana Sutras and as systematized in the Madhyamaka and Chittamatrin schools of philosophy, but the methods of meditation and practice were radically different than anything seen in the monasteries. The Sanskrit term Mahasiddha means a great adept. A Siddha or adept is an individual who, through the practice of sadhana, a spiritual and psychic discipline or process of realization, attains the realization of siddhis, psychic and spiritual powers. These methods were revealed in Buddhist scriptures known as Tantras. Sometimes their source is said to be the historical Buddha, but more often it is a transhistorical aspect of the Buddha called Vajradhara who reveals the Tantra in question directly in a vision to a specific Mahasiddha. This vague and ill defined community of Mahasiddhas was the historical matrix for the revelation of the Higher Tantras, the Anuttara Tantras. They broke with the conventions of Buddhist monastic life of the time, and abandoning the monastery they practiced in the caves, the forests, and the country villages of Northern India. In complete contrast to the settled monastic establishment of their day, which concentrated the Buddhist intelligenzia in a limited number of large monastic universities, they adopted the life-style of itinerant mendicants, much the wandering Sadhus of modern India.".....http://www.vajranatha.com/articles/traditions/mahasiddha.html

"....Mahasiddhas are contentious. Dowman (1986) holds that they all lived between 750 AD - 1150 AD.....Reynolds (2007) proffers that the mahasiddha tradition...broke with the conventions of Buddhist monastic life of the time, and abandoning the monastery they practiced in the caves, the forests, and the country villages of Northern India. In complete contrast to the settled monastic establishment of their day, which concentrated the Buddhist intelligenzia in a limited number of large monastic universities, they adopted the life-style of itinerant mendicants, much the wandering Sadhus of modern India......
The mahasiddha tradition may be conceived and considered as a cohesive body due to their spiritual style, sahaja; which was distinctively non-sectarian, non-elitist, non-dual, non-elaborate, non-sexist, non-institutional, unconventional, unorthodox and non-renunciate. The mahasiddha tradition arose in dialogue with the dominant religious practices and institutions of the time which often foregrounded practices and disciplines that were over-ritualized, politicized, exoticized, excluded women and whose lived meaning and application were largely inaccessible and opaque to non-monastic peoples.....In the sacred biographies of the great siddhas of the Vajrayāna tradition. Tilopa attained realization as a grinder of sesame seeds and a procurer for a prominent prostitute. Sarvabhakṣa was an extremely obese glutton, Gorakṣa was a cowherd in remote climes, Taṅtepa was addicted to gambling, and Kumbharipa was a destitute potter. These circumstances were charnel grounds because they were despised in Indian society and the siddhas were viewed as failures, marginal and defiled......By convention there are 84 Mahasiddhas in both Hindu and Tibetan Buddhist traditions, with some overlap between the two lists. The number is congruent with the number of siddhi or occult powers held in the Indian Religions...... The sadhana of Dream Yoga as practiced in Dzogchen traditions such as the Kham, entered the Himalayan tantric tradition from the Mahasiddha, Ngagpa (ngakpas wear uncut hair and white robes) and Bonpo....http://en.wikipedia.org/wiki/Mahasiddha

"....Dzogchen did not originate in Tibet itself, but had a Central Asian origin and was subsequently brought to Central Tibet by certain masters known as Mahasiddhas or great adepts. There thus would appear to exist two ancient and authentic lineages for the Dzogchen teachings, the Buddhist and the Bonpo......the Bonpo transmission from a line of Mahasiddhas dwelling around Mount Kailas and the lake country of Zhang-zhung to the west and north of Tibet. ..... the Kalachakra Tantra is said to have been brought from Shambhala in Central Asia to Nalanda in India in the tenth century by the Mahasiddha Tsilupa (Tsilupa (a.k.a., Chilupa, Tsi lu, Tsilu, Cilu, Cheluka, etc.)....This "Buddhism", known as gyer in the Zhang-zhung language and as bon in the Tibetan, was not particularly monastic, but more Tantric in nature and its diffusion was stimulated by the presence of various Mahasiddhas in the region such as the illustrious Tapihritsa and his predecessors dwelling in caves about Mount Kailas and about the lakes to the east in Northern Tibet. Even into this century, Kailas remained an important site of pilgrimage drawing Hindu sadhus and yogis from India.....http://www.angelfire.com/vt/vajranatha/bondzog.html

"......Tsilupa and Kalachakrapada the Elder were actually the same person, a so-called "madasiddha," ...Tsilupa actually traveled by conventional means to a country which then actually existed in the material realm, but to which legend has given the name of Shambhala, and there met with teachers or adepts who taught him the Kalachakra and presented him with actual texts which he then brought back to India......Tsipula arrived back in India in 966 or 967 a.d......turned up at Nalanda monastery, where he drew the Kalachakra symbol for the so-called "ten guardians of the world" over the entrance gate. This "mantric cosmogram," we are told, "consists of different colored letters woven together," and symbolizes "the entire universe as conceived by the Kalachakra." Below the drawing he inscribed six main tenets of the Kalachakra teachings. The abbot of Nalanda, a man named Nadapada (Csoma's Narotapa), along with 500 resident pandits debated with Tsilupa but eventually "fell at his feet" and accepting his teachings. Nadapada has been identified by most commentators as Kalachakrapada the Younger.....The Rva tradition also credits the pandit Tsilupa with bringing the Kalachraka doctrine from Shambhala to India. Tsilupa had studied at many of the major centers of Buddhist learning including Ratnagiri, Vikramasila, and Nalanda. He soon realized that none of these teachings could help him achieve buddhahood in this lifetime. He then heard that in Shambhala more advanced teachings were available which would allow him to quickly attain enlightenment.... Tsilupa set out for Shambhala in the company of a group of traders. .....Tsilupa actually did get to Shambhala, where a emanation of Avalokiteshvara (King Yasha's son Pundarika was considered an emanation of Avalokiteshvara) blessed him with the ability to memorize a thousand verses a day. He thus memorized the various Kalachakra texts and returned to India......http://www.shambhala.mn/Files/transmission.html


"Both tertons and Vedic or Bonpo Rishis cognize wisdom by overthrowing dualistic limitations within consciousness and the wisdom that emerges emerges from a mandala, which emerges from a seed-syllable.".....http://www.mail-archive.com/fairfieldlife@yahoogroups.com/msg232965.html

"The number of mahasiddhas varies between eighty-four and eighty-eight, and only about thirty-six of the names occur in both lists. In many instances more than one siddha with the same name exists, so it must be assumed that fewer than thirty siddhas of the two traditions actually relate to the same historical persons.....The great variation in phonetic transcription of Indian words into Tibetan may partly be the result of various Tibetan dialects. In the process of copying the Tibetan transcriptions in later times, the spelling often became corrupted to such an extent that the recognition or reconstitution of the original names became all but impossible. Whatever the reasons might be, the Tibetan transcription of Indian names of mahasiddhas clearly becomes more and more corrupt as time passes.".....http://en.wikipedia.org/wiki/Mahasiddha#Different_Mahasiddha_traditions