“in the Mdo-’dus, ’Ol-mo-lung-ring is located to the northwest of western Tibet (where Ti-tse/Ti-se is) and rather to the north of a mysterious country called Dmu (Persia, perhaps?). It is cut by both the Nine Dark Mountains (on which, more soon) and the rivers Pag-shu and Si-ti, which we might very well identify as the Oxus (Vakṣu) and Sitā …… Here we seem to be dealing with an area that stretches from the Badakhshan in northeastern Afghanistan, circling (to the right or the left of) the Pamirs, and touching on, but not actually including, the Tarim Basin (which seems to be well covered by the Li Bal Phrom of the scheme). Hence, compared to the picture from the Eighteen Great Countries”……

The Kabul River (Persian/Urdu: دریای کابل‎; Pashto: کابل سیند‎, Sanskrit: कुभा ), the classical Cophes /ˈkoʊfiːz/, is a 700-kilometre (430 mi) long river that starts in the Sanglakh Range of the Hindu Kush mountains in Afghanistan and ends in the Indus River near Attock, Pakistan. It is the main river in eastern Afghanistan and is separated from the watershed of the Helmand by the Unai Pass. The Kabul River passes through the cities of Kabul and Jalalabad in Afghanistan before flowing into Khyber Pakhtunkhwa in Pakistan some 25 kilometres (16 mi) north of the Durand Line border crossing at Torkham.

“ If we follow the scheme of the Eighteen Great Countries, and assume that ’Ol-mo-lung-ring is, as many later sources say, in some way identical with Stag-gzig, we see that Stag-gzig is to the west of Tibet, and is bordered by the smaller areas of Gilgit and Yavana (Bactria). This would point to an area stretching from present-day north Pakistan to Takhar (equivalent to Tibetan Tho-gar, which shouldn’t be confused with the Thod-dkar which borders China, although both names seem to come from a single ethnonym, and are in fact occasionally confused in Bon sources) in northeastern Afghanistan, and possibly including areas still further to the south.” 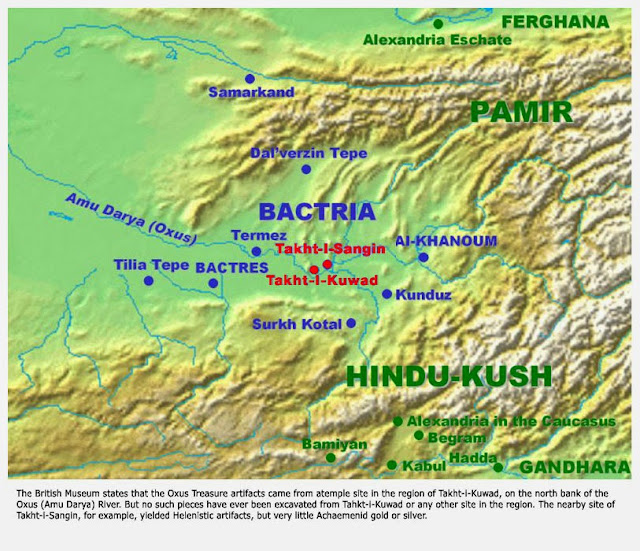 “’Ol-mo-lung-ring never really served as a place of pilgrimage, but besides that it was everything we could want from a place. No Bonpo of recent centuries has actually succeeded in travelling overland to ’Ol-mo-lung-ring, or if they have, they never returned to tell the tale. It was a paradise both on and beyond the earth, an exotic country, a place of religious origins, a visionary landscape, a Pure Land in which one might wish to gain rebirth. Although its explicit identification with Shambhala, more correctly Sambhala, appears only rather late in Bon literature …., there are a few general and specific features, even in the earlier texts, that would suggest their similarity. ’Ol-mo-lung-ring was and is all these things, but at the same time it was a place on the ground that we can indeed roughly locate, through text-based historical geography, in the area between Ladakh/Kashmir and the Oxus River. And it was and is a quite original holy place rooted in the sacred biography of Lord Shenrab, not just a copy of anyone else’s holy place, not a retracing of some lost Persian map, but a place interwoven with the sacred time of Bon’s founding moments.” 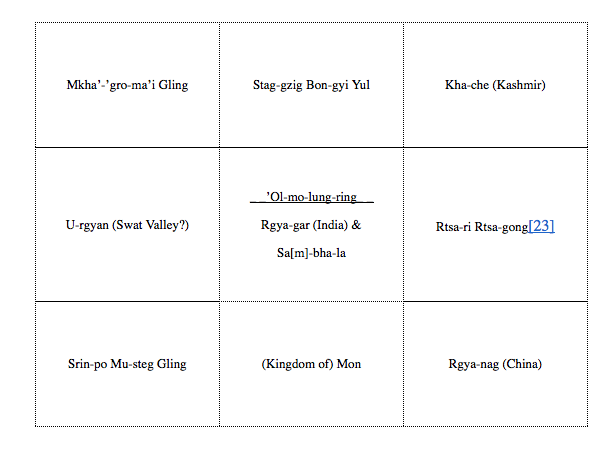 “The Rgyal-rabs (p. 21) tells, without great conviction, a piece of a traditional story: When you look westward from the mountaintops of Kashmir, there is a dark rainbow. Travelling for a long distance in that direction there appears, at the outskirts of Sharp Teeth (Dbal-so) Glacier [Mountains], a pathway no larger than a bamboo tube. Since she was unable to go into it, the messenger woman returned after reaching the glacier [mountains].”

“…we may say that all the various sources we have brought forward point to a location for ’Ol-mo-lung-ring not precisely in Persia, but in the lands between northern Persia and the (changing) western borders of Tibet. There is, it is true, a tendency to identify this area with the area of Mount Ti-se within western Tibet, although the two areas are just as often carefully distinguished; some of the place names in both places correspond, or are made to correspond, thus accentuating the perplexity of our problem. One author has suggested that the geography of western Tibet was transferred out of Tibet to form an idealized (and inaccessible) land. It seems equally possible that some aspects of the geography of ’Ol-mo-lung-ring were transferred into western Tibet to form a more accessible substitute holy place. My temporary impression is that, no matter how idealized the picture of ’Ol-mo-lung-ring, it could very well encapsulate cultural memories of the area to the west of Tibet and on the fringes of Persia, a place where Buddhism was long known and practiced, perhaps helping us to explain, in some part, the phenomenon of Bon in Tibet as a result of Buddhist migrations from (as well as Tibetan conquests of) that area. We must emphasize, since there are many who would wish otherwise, that the Bon sources always place ’Ol-mo-lung-ring well outside the boundaries of Tibet (and well outside the area of western Tibet, or Zhang-zhung, which includes Mt. Ti-se).”

Kværne, Per, ‘Dualism in Tibetan Cosmogonic Myths and the Question of Iranian Influence’, in: C.I. Beckwith, ed., Silver on Lapis: Tibetan Literary Culture and History, Bloomington, The Tibet Society, 1987, pp. 163-174.