Sakyas & the Caucasus Indicus Mountains (625 BC) 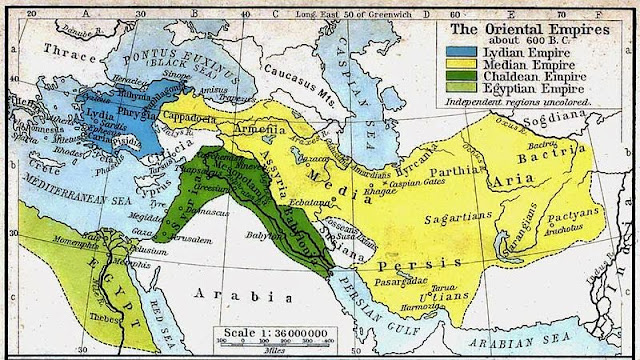 "In the time of Alexander the Great, the Hindu Kush range was referred to as the Caucasus Indicus or the "Indian Caucasus" (as opposed to the Greater Caucasus range between the Caspian and Black Seas).....Some sources state that the term Hindu Kush originally applied only to the peak in the area of the Kushan Pass, which had become a center of the Kushan Empire by the 1st century AD. This mountain range was also called Paropamisadae by Hellenic Greeks in the late first millennium BC.... the Durand Line, established in 1893, continues on through mountainous regions to the Khyber Pass area. Beyond this point it rises to the crest of the Hindu Kush, which it follows eastward to the Pamir Mountains.." 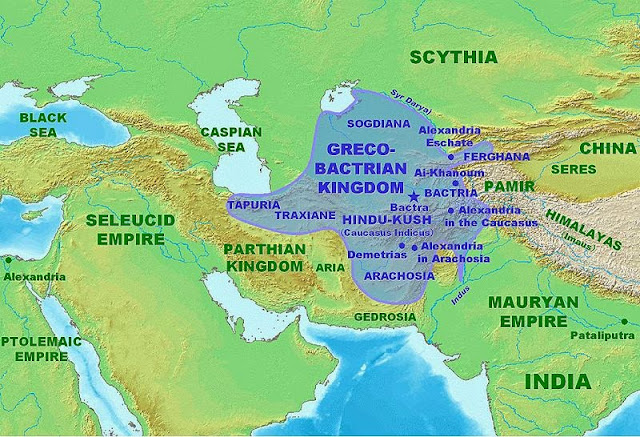 "The Kushan Pass or Kaoshan Pass (el. about 4,370 m or 14,340 ft) is a mountain pass just west of the famous Salang Pass (3,878 m. or 12,723 ft.) in the Hindu Kush mountain range of northern Afghanistan. These two passes provided the most direct, if difficult, routes across the imposing east-west wall of the Hindu Kush mountains which divide northern Afghanistan or Tokharistan from Kabul province, which is closely connected to southern Afghanistan and Pakistan.....Alexander the Great took his troops across both the Khawak Pass and the Kaoshān or Kushan Pass."

"The Sākyas were one of a number of small tribes—Kāmāla, Malla, Vṛji, Licchavi, etc—who do not appear in the Ṛgveda. Pāṇini (ca 5th century BCE) knows the Mallas and Vṛji as desert tribes in Rajasthan, and Alexander's ambassadors met a tribe called Malloi in the same region. They appear to have entered India from the west some time after the Vedas were completed (ca. 1000 BCE) and then migrated east well before the time of the Buddha (ca. 480-400 BCE). .... An abrupt climate change ca. 850 BCE caused Western India to have an arid period which may have been what set off the migration. This also coincides with a moist period on the Central Asia Steppes and a massive expansion of the Sycthian culture from the region of Tuva westwards to the Black Sea."

"When the British were consolidating their empire in India, they were looking for the natural boundaries of India. In the east, there was the buffer state of Burma and the theoretically impenetrable jungles and hills of Assam, while in the north, the Himalayas were impassable. In the south, was the ocean which the British anyway dominated worldwide. However, while reading Indian history they noticed that for the last 4,000 years the northwest had acted as a corridor for the continuous invasions of India - the Highway of Conquests. Starting with the Aryans in 2500 BC other invasions followed by the Persians, Greeks, Sakas, Kushans, Turks, Mongols, Moghuls and finally the Afghans.....This was a route, which obviously had to be blocked, if the rulers were to sleep soundly at night. After their domination of the Punjab, the British, therefore, decided to extend their North West Frontier (now Khyber Pakhtunkhwa) to the natural boundaries of India, which they presumed to be the Hindu Kush as a continuation of the Himalayas, with Iran acting as a buffer state. As the Hindu Kush passes were too high to be continuously manned all the year round, a screen was envisaged along the Oxus. While this seemed eminently logical and easy on the map, on the ground it proved to be a policy that was practically impossible to maintain, due to a constraint which the British had so far failed to notice during their conquest of India i.e. the people of the country. The Afghans proved themselves to be a match for the British and handed them their first defeats in their endeavour to paint the global map red.".....http://www.nation.com.pk/columns/16-Nov-2010/Durand-Line-Geopolitical-issues

" Saka Interregnum in Persia....653-625 BC Madius - Scythian interregnum....Herodotus speaks in some detail of a period of Scythian domination, the so called Scythian interregnum in Median Dynasty history. His dating of this event remains uncertain but traditionally it is seen as falling between the reigns of Phraortes and Cyaxares and as covering the years 653 to 625 BC. .....Cyaxares or Hvakhshathra (Old Persian, Uvaxštra, Greek: Κυαξάρης; r. 625–585 BC), the son of King Phraortes, was the third and most capable king of Media. According to Herodotus, Cyaxares, grandson of Deioces, had a far greater military reputation than his father or grandfather.....By uniting the Iranian tribes of Ancient Iran and conquering territory, Cyaxares allowed the Median Empire to become a regional power. "

"India: The Shakyas were settled in the territory bounded by the Himalayas in the north, The Rohini (the present-day Kobana, a tributory of the Rapti) in the east and the Rapti in the south. Some Buddhist texts, Mahāvastu, Mahavamsa and Sumangalavilasini give accounts of the Śākyas......Indologist Michael Witzel has suggested that the similarity of the name Śākya and Śaka (the Indian and Persian name for the Scythians) is no coincidence. He thinks the Śākyas were "an early incursion of the Scythians" into India."

"The Sākyas appear to have retained features that have other Indic or Vedic precedent such as burial mounds (stūpas), which are referred to in the Śatapatha Brāhmaṇa as "demonic" (ŚB 12.8.1.5), and are similar to the Kurgan mounds in Central Asia. Witzel has also suggested, informally, that the idea of being judged on the basis of your actions in life comes into India from Zoroastrianism. Certainly karma has no Vedic precedent, and Johannes Bronkhorst has argued that Brahmins were assimilating the idea of karma from another possible connection with Iran is the division of the person into body, speech and mind by Buddhists, which has no Vedic precedent but is prominent in Zoroastrianism. However by the time we know of them the Śākyas have been thoroughly Indianised......"

"By the time of the Buddha the Śākya nation had been subsumed into the Kingdom of Kosala under King Pasenadi."

"Sakya (Shakya): derived or descended from the Sakas, from whom the historical Buddha came, whence his honorific Sakymuni. "Sage of the Sakyas." Many people of the Sakya tribe followed the Buddha after his enlightenment.

"The Śākyas are mentioned in later Buddhist texts as well including the Mahāvastu (ca. late 2nd century BCE), Mahāvaṃsa and Sumaṅgalavilāsinī (ca. 5th century CE), mostly in the accounts of the birth of the Buddha, as a part of the Adichchabandhus (kinsmen of the sun) or the Ādichchas (solar race) and as descendants of the legendary king Ikṣvāku (Pāli: Okkāka)....

"The Mahāvastu (Sanskrit for "Great Event" or "Great Story") is a text of the Lokottaravāda school of Early Buddhism. It describes itself as being a historical preface to the Buddhist monastic codes (vinaya). Over half of the text is composed of Jātaka and Avadāna tales, accounts of the earlier lives of the Buddha and other bodhisattvas.......The Mahāvastu contains prose and verse written in mixed Sanskrit, Pali and Prakrit. It is believed to have been composed between the 2nd century BCE and 4th century CE."

"The Buddhist text Mahavamsa (II, 1-24), traces the origin of the Sakyas (Śākyas) to king Okkaka (Ikshvaku) and gives their genealogy from Mahasammata, an ancestor of Okkaka. This list comprises the names of a number of prominent kings of the Ikshvaku dynasty, which include Mandhata and Sagara. According to this text, Okkamukha was the eldest son of Okkaka. Sivisamjaya and Sihassara were the son and grandson of Okkamukha. King Sihassara had eighty-two thousand sons and grandsons, who were together known as the Sakyas. The youngest son of Sihassara was Jayasena. Jayasena had a son, Sihahanu, and a daughter, Yashodhara (not to be confused with prince Siddhartha's wife), who was married to Devadahasakka. Devadahasakka had two daughters, Anjana and Kaccana. Sihahanu married Kaccana, and they had five sons and two daughters, Suddhodana was one of them. Suddhodana had two queens, Maya and Prajapati, both daughters of Anjana. Siddhartha (Gautama Buddha) was the son of Suddhodana and Maya. Rahula was the son of Siddhartha and Yashodara (also known as Bhaddakaccana), daughter of Suppabuddha and granddaughter of Anjana."

"King Suddhodana (Sanskrit: Śuddhodana; Japanese: 浄飯王 Jōbon-ō) was the father of Gautama Buddha. He was a leader of the Shakya people, who lived in Kapilvastu and was a righteous king......There lived once upon a time a king of the Śākya, a scion of the solar race, whose name was Śuddhodana. He was pure in conduct, and beloved of the Śākya like the autumn moon. He had a wife, splendid, beautiful, and steadfast, who was called the Great Māyā, from her resemblance to Māyā the Goddess."

"Asha is not Karma. Karma is a mechanical retribution for actions. Asha is an aspect of the Nature of God and works to promote Haurvatat. Thus Asha has no such thing as the concept of 'Karmic Debt" which is totally foreign to Zarathushtra's teaching of free will....Asha (aša) is the Avestan language term (corresponding to Vedic language ṛta) for a concept of cardinal importance to Zoroastrian theology and doctrine. In the moral sphere, aša/arta represents what has been called "the decisive confessional concept of Zoroastrianism." The opposite of Avestan aša is druj, "lie."

The significance of the term is complex, with a highly nuanced range of meaning. It is commonly summarized in accord with its contextual implications of 'truth' and 'right(eousness)', 'order' and 'right working'.......Its Old Persian equivalent is arta-.[c] In Middle Iranian languages the term appears as ard-.[a].......The word is also the proper name of the divinity Asha, the Amesha Spenta that is the hypostasis or "genius" of "Truth" or "Righteousness". In the Younger Avesta, this figure is more commonly referred to as Asha Vahishta (Aša Vahišta, Arta Vahišta), "Best Truth".[b] The Middle Persian descendant is Ashawahist or Ardwahisht; New Persian Ardibehesht or Ordibehesht. In the Gathas, the oldest texts of Zoroastrianism and thought to have been composed by the prophet himself, it is seldom possible to distinguish between moral principle and the divinity. Later texts consistently use the 'Best' epithet when speaking of the Amesha Spenta, only once in the Gathas is 'best' an adjective of aša/arta."