“In the Tibetan tradition there exist numerous rituals for recovering health, extending life, and recapturing any life force that has been lost due to external negative force, internal emotional suffering, or the secret obscuration of ignorance. The Tsewang Rikzin ritual, from the Tibetan Bon tradition, is just such a rite and includes supplementary sections for ransoming one’s life and soul from the bonds of negative influence. “….. 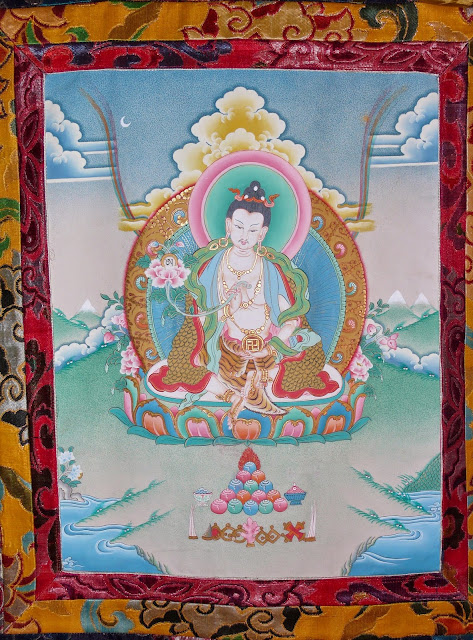 “…Legend says that Drenpa Namka married a woman named Oden Barma, who was born of high caste Indian parents. The couple had twin sons, the first of whom was named Yungdrung Donsal, who would later be named Tsewang Rigdzin. The second was named Pema Tongdrol. Tsewang Rigdzin is said to have been born with a svastika in the middle of his forehead (an auspicious Bon mark) and the skill of clairvoyance. Pema Tongdrol is described as dark and royal in appearance, with big eyes, a scrunched nose, and hands that "made ferocious gestures while his feet danced." It is said that through meditation Tsewang Rigdzin accomplished the feat of long life, while Pema Tongdrol attained powerful and dangerous magical powers. Both are now revered as Bon saints.”…Treasury of Lives: Bon Master Drenpa Namka by Alexander Gardner……http://www.tricycle.com/blog/treasury-lives-bon-master-drenpa-namka

“Tsewang Rigdzin is the main Long Life Deity of Bon…..In the bon tradition it is said, that he was the son of Drenpa Namkha. He was a realised master and Siddha.”…..http://www.bonpo-arts.com/tsewang_rigdzin.html

“ Tsewang Rigdzin ritual…..The La or soul is many times in live attacked by evil forces…..Like we all know can bad thoughts, put on a person, cause illness for that person…..Therefore are bad thoughts bad/ negative karma……The opposite is also true, namely positive thoughts about a person will cause happiness for him/her……The Tsewang Rikzin ritual, is a rite and includes supplementary sections for ransoming one’s life and soul from the bonds of negative influence(s).”…..http://yungdrung-rignga-ling.forums-free.com/the-tsewang-rigdzin-ritual-t394.html

“Lama Khemsar Rinpoche gives the following teaching and empowerment from Tsewang Rigdzin: The Empowerment consists of Rinpoche giving tse-drub nyen-pa (transmission of the long life mantra), tse-bum (life-enforcing holy grail / vase), tsak-li (card shaped scrolls depicting lineage holders of the Tsewang) tse-tor (life-enforcing sculpture), tse-ril (long life precious pill), tse-chang (long life nectar) and tse-yi dha-dar (life-enforcing arrow banner). The main deity of The Empowerment is Tse-Wang Rigzin, one of the foremost sources of the Zogchen teachings……Rinpoche emphasizes that this powerful healing rite is designed not only to prolong one's life span but also to re-enforce or transform the physical and mental health of the practitioner by enhancing his or her inner understanding and experience!…..This rite is not only healing, but a complete Tibetan spiritual practice, including refuge, generation of enlightened mind, purification, mandala offering and more.”…..

“ In terms of the Nine Ways of Bon, the Tsewang Rikzin practice belongs to the tantric vehicle of transformation while the ransom sections belong to a lower causal vehicle known as ‘Rites and Rituals’……Before one performs the ritual of reinforcing the life force (chi bslu) and retrieving the soul (bla bslu) for the benefit of an individual whose life is threatened or whose health is suffering, the practitioners should gather and proceed through the recitation and visualization sections of the sadhana……Both positive and negative forces control the life force of every being. In this death ritual these negative energies are personified as the devils of death who seek to steal the life force of sentient beings.”…..Death Ransom - Soul Ransom: A Bonpo Ritual to Extend the Life-span and Restore the Life-force…..Explanation and Commentary by Steven Landsberg

“In the 7th century the Zhang Zhung Nyen Gyud was written down by Gyerpung Nangzher Lodpo. Prior to that it was mainly, with exceptions, taught from one master to one qualified student. Times change though and different times call for different means. Now you can receive transmission of the Zhang Zhung Nyen Gyud and do the practices that were once secret, only allowed access by a select few.”

“According to the Bon tradition there are six Tsewang Rikzin cycles named according to various places where the master Tsewang Rikzin practiced. Although he actually practised in eight different places, we can only find six texts related to six of these locations. These sacred sites are found in India, Takzig, Zhang Zhung, Jaritsukden, China, and Tibet. The particular version upon which the following explanation is based was titled according to the name of a cave (Bya ri Tsukden) to the north of Mt. Kailash in the Garuda Valley. Accordingly, it is referred to as Tsewang Jarima. Tsewang Rikzin’s consort Thukje Kundrol composed the text entitled Rikzin Tsewang Chogdu Tseyi Drubpai Shongshugs during the time of the eighth king of Tibet Trigom Tsenpo. “…….http://www.keithdowman.net 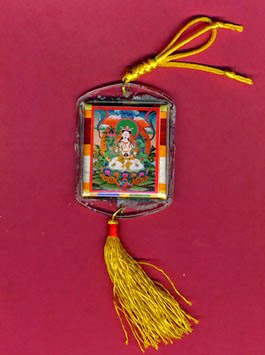 Khorlo: Tsewang Rigdzin…….The mantra of Tsewang Rigdzin, Long Life Deity of the Bon Buddhist Tradition, is written on paper which is then folded, wrapped with five different colors of thread and encased in plastic. This khorlo is used in the Soul Retrieval Practice and may be worn as a pendant, or placed on ones shrine.” …..http://ligminchastore.org/category/shrine-and-ritual-items/khorlo-tsewangrigdzin.html

“…… the Tsewang Rikzin sadhana requires the preparation of torma. The primary torma symbolizing the deity to be accomplished is made from flour and butter, ornamented with jewels, and surrounded by many small globes of long life. It should be seated in a tray and then placed upon a white cloth which covers a swastika drawn with sesame or mustard seeds. A long life arrow, a mandala, and the usual offerings representing the five senses are also positioned upon the altar. A vase, which is filled with water, milk and seeds, is then sealed with peacock feathers and placed before the chief torma. To this vase a string is attached which extends to all of those participating in the rite. As the ritual is performed and thousands of mantras recited, the participants blow upon the mantra chain and thus empower the contents of the vase. “…..http://www.keithdowman.net

“In terms of the Nine Ways of Bon, the Tsewang Rikzin practice belongs to the tantric vehicle of transformation while the ransom sections belong to a lower causal vehicle known as ‘Rites and Rituals’. Before one performs the ritual of reinforcing the life force (chi bslu) and retrieving the soul (bla bslu) for the benefit of an individual whose life is threatened or whose health is suffering, the practitioners should gather and proceed through the recitation and visualization sections of the sadhana.”…..http://www.reocities.com/okar_review/bla.html