“According to the Bon tradition there are six Tsewang Rikzin cycles named according to various places where the master Tsewang Rikzin practiced. Although he actually practised in eight different places, we can only find six texts related to six of these locations. These sacred sites are found in India, Takzig, Zhang Zhung, Jaritsukden, China, and Tibet. The particular version upon which the following explanation is based was titled according to the name of a cave (Bya ri Tsukden) to the north of Mt. Kailash in the Garuda Valley. Accordingly, it is referred to as Tsewang Jarima. Tsewang Rikzin’s consort Thukje Kundrol composed the text entitled Rikzin Tsewang Chogdu Tseyi Drubpai Shongshugs during the time of the eighth king of Tibet Trigom Tsenpo…Tsewang Rikdzin was the son of Drenpa Namkha and the brother of Pema Thongdrol who some Bonpos claim was the original Padma Sambhava…..”….Death Ransom - Soul Ransom:A Bonpo Ritual to Extend the Life-span and Restore the Life-force…Explanation and Commentary by Steven Landsberg

“According to Samten Karmay in "The Treasury of Good Sayings" in a footnote of the introduction (xxxii,#4) little is known of Dranpa Namkha's historical existence but one account states he had twin sons who were Tshe-dbang Rig-dzin, an eighth century Bon teacher & Pad-ma 'Byung-gnas who is Padmasambhava. The footnote continues saying that the Nyingma's hold truth to this story but other texts fail to mention this second son…..Drenpa Namkha is a father of two son which are twins:…..The older son is YUNGDRUNG DONSAL (tsewang rigzin) and the younger is PEMA THONGDROL whom Bon tradition identifies with the buddhist Padmasambhawa. From the point of bon philosophy, padmasambhawa was born in the family of Drenpa Namkha (father) and Oden Barma (mother). One day mother went to river for a bath along with his son (padmasambhawa). Before taking a bath, Mother put his son in the flower of lotus at the side of the river. After having a bath, mother come back to receive the child but didn't found. She became so sad and return empty hand to home. Then the river is rushing towards the indian ocean. At the same time, there was a king who come to take a bath in the river along with his retinue. There he found the child who is abide in the lotus flower. So, the king took the baby and gave the name (padmasambhawa) which means lotus born baby. Then (padmasambhawa) learns all the five science of indian tradition and became the most influential and remarkable eminent scholar. After many years he went to Tibet and he founded the NYINGMA religion. He also subdue the demons and naga there. He estalblished the (Samay Tsukhlagkhan) which is his great contribution to buddhism tradition.”….http://yungdrung-rignga-ling.forums-free.com/padmasambhawa-guru-rinpoche-t738.html

“Lama Tsewang Rikdzen has a very extensive biography, but as far as is known it has not been translated into English. However, included below are a few very brief and very general details about him……Lama Tsewang Rikdzin was an historical person who was one of twin sons born to Lama Drenpa Namkha. His mother was Öden Barma, who was a Brahmin from India. His twin brother is known as Pema Thongdrol by the Bonpos and as Guru Padmasambhava by Buddhists. Both Lama Drenpa Namkha and Khandro Öden Barma were very realized practitioners……Lama Tsewang Rikdzin’s life story is told in four volumes of texts. He is most widely practiced as a long life yidam, as one of his powers was in extending his lifespan. Some texts say that he lived over 500 years, others say that he lived over 800 years. He practiced with his consort, Khandro Nyima Öbar. He was a realized practitioner of dzogchen as well as having mastery of tantric practice. “….http://www.reikicolorado.org/news.html

“Dilgo Khyentse Rinpoche gave my father as an honour to his great realization, his own life “Usha” (pema thongdrol, dharma hat)…”….http://www.tharlam-dronme.org/chokling-rinpoche

“ In Bhutan the dances are performed during an annual religious festival known as Tsechu, which is held in each district. At certain festivals a large painting known as a thongdrol is also briefly unfurled — the mere glimpsing of the thongdrol is believed to carry such merit as to free the observer from all present sin (see Culture of Bhutan). Cham dances are prohibited in Tibet by the PRC government.”….http://psychology.wikia.com/wiki/Tibetan_Buddhism

“grol…….liberation, freedom, release, releasing, disperse, loosen, deliver, deliverance, SA 'grol ba, to be over, to be let out (from class / meeting), are released, become liberated in, liberating, one will be liberated [JV]……free[dom], liberation, get out/ loose/ free/ untied, get free of difficulty/ trouble/ danger, be over/ dismissed/ adjourned/ let out [IW]” 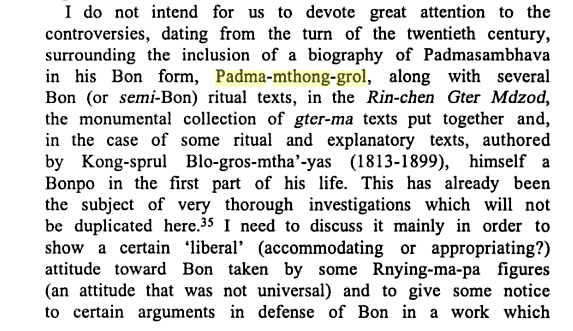 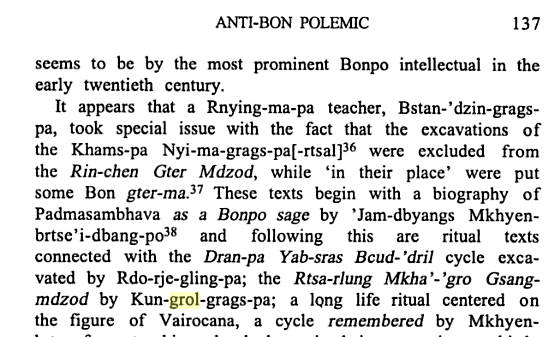 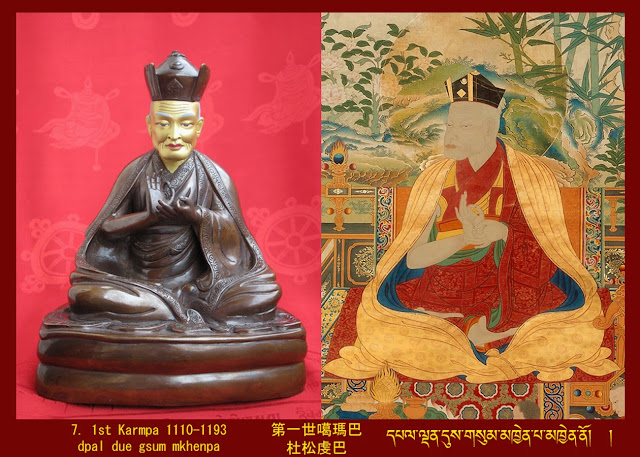 “Dusum Khyenpa was born in Kham and took novice ordination with Kadam monks there at the age of sixteen. If the artistic record is to be believed, he was not a handsome man; almost all depictions of him feature a twisted nose and a serious underbite. According to legend, the year that he took ordination a dakini gave him a hat—maybe deep blue, maybe black—made from the hair of a thousand dakinis. Kagyu historians have offered various explanations as to the nature of this hat, which is said to have been invisible to most people, and of the hats worn by subsequent Karmapa incarnations. The Second, Fifth, and Seventh are all said to have been given the first visible hat, the one used in the famous black hat ceremony for which the Karmapas became known. “….http://www.tricycle.com/blog/treasury-lives-kagyu-founders-part-3-first-karmapa-and-lama-zhang