“The different versions and distinctive details found amongst the biographies of Drenpa Namka provide invaluable insight into the often-adversarial dialogue between Buddhism and Bon…..Multiple versions of a single figure’s biography are a common occurrence in Tibet and the Himalayan region…..Bon and Nyingma mythology conflate Pema Tongdrol with Padmasambhava…” 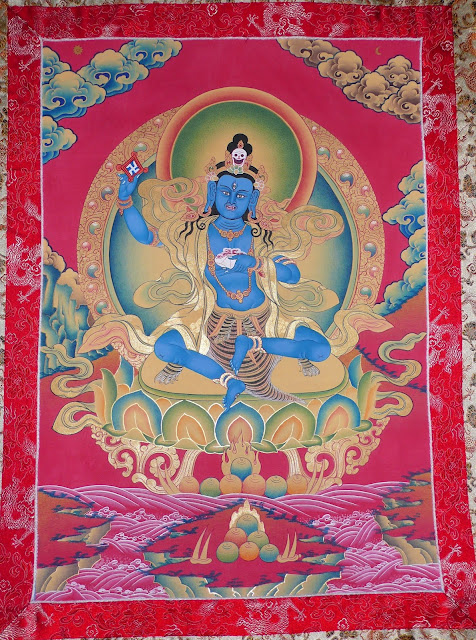 “Drenpa Namka is historically important as the father of the Buddhist saint, Padmasambava…..Drenpa Namkha (dran pa nam mkha') was born in the eighth century in a village called Chunlung Ngul Kha in southwestern Tibet, near the sacred Mt. Kailash. As a young man, he was a gifted student of eight famous Bon teachers. He became a self-realized supreme master of the three Bon practices, known as Sutra, Tantra and Dzogchen. At that time there was great persecution of Bon by the King of Tibet. Drenpa Namka was revered for his dedication to the protection and preservation of the Bön teachings during those difficult times….Drenpa Namkha is a popular figure in Bonpo history. His biography in 8 volumes was recently published by sPa-tshang Sonam Gyantsan, Delhi 1983. He is believed to have had twin sons: Tshe dbang Rig 'dzin, a Bonpo teacher, and Pad ma 'Byung gnas, the famous Buddhist teacher Padmsambhava” … (Karmay, The Treasury of Good Sayings, Oxford University Press, London 1972)

“Drenpa Namka, an eighth-century master who was both Buddhist and Bon…..according to Bon sources he is an important sage who saved the Bon teachings from being extinguished. He did this by adopting Buddhism and displaying an ability to transcend religious boundaries, through which he overcame sectarian controversies and demonstrated the inseparable nature of Buddhism and Bon. ….…Treasury of Lives: Bon Master Drenpa Namka by Alexander Gardner

“…Legend says that Drenpa Namka married a woman named Oden Barma, who was born of high caste Indian parents. The couple had twin sons, the first of whom was named Yungdrung Donsal, who would later be named Tsewang Rigdzin. The second was named Pema Tongdrol. Tsewang Rigdzin is said to have been born with a svastika in the middle of his forehead (an auspicious Bon mark) and the skill of clairvoyance. Pema Tongdrol is described as dark and royal in appearance, with big eyes, a scrunched nose, and hands that "made ferocious gestures while his feet danced." It is said that through meditation Tsewang Rigdzin accomplished the feat of long life, while Pema Tongdrol attained powerful and dangerous magical powers. Both are now revered as Bon saints.”…Treasury of Lives: Bon Master Drenpa Namka by Alexander Gardner

“Bon mythology … holds that Drenpa Namka never left his Bon faith and, furthermore, transmitted the teachings of Bon to Padmasambhava who later concealed them as Bon treasures. Drenpa Namka is given credit for organizing many of the Dzogchen Semde (rdzogs chen sems sde) and disseminating the translations, commentaries, and oral teachings of Padmasambhava.”…Treasury of Lives: Bon Master Drenpa Namka by Alexander Gardner

“The different versions and distinctive details found amongst the biographies of Drenpa Namka provide invaluable insight into the often-adversarial dialogue between Buddhism and Bon. Both Buddhism and Bon honor Drenpa Namka as an important historical figure who contributed to the prosperity and longevity of their own traditions, but each gives a very different account of the figure. Multiple versions of a single figure’s biography are a common occurrence in Tibet and the Himalayan region. This is in part due to the process and tropes involved in writing the biographies, which are weaved from multiple threads and decorated with mythology and mystique. By examining the different versions of Drenpa Namka’s hagiographies, we see a larger story being told: one of political and religious competition between two adjoining traditions—that of Buddhism and Bon—ever adhered to one another.”…Treasury of Lives: Bon Master Drenpa Namka by Alexander Gardner

“Drenpa Namkha….The first one is Tazig Drenpa Namkha, the second one is Zhang Zhung Drenpa Namkha and the third is Tibetan Bökyi Drenpa Namkha.
The first Drenpa Namkha….The most ancient one was known as Tazig Drenpa Namkha and was supposed to have been spontaneously born on a lotus in the country of Tazig.
The second Drenpa Namkha was the siddha who lived during the reigns of ancient Tibetan Kings, especially during the reign of Trisum Tsanpo. He did hid¬ing most of the texts hidden during this period and to be later redis¬covered at the end of the 10th century. He was considered by some 14th century Bön po masters as the father of the twin brothers: Tshe dbang rig ’dzin and Padma mthong grol (Padmasambhava).
The third Drenpa Namkha…..Was an important Bön po scholar and a great Sage who was forced to give up Bön and to adopt the Indian Buddhist tradition, in order to preserve his life and tradition. He is supposed to have worked with important Böno masters of his time such as Coza Bönmo and others. He also took part in hiding many texts during the persecution of Bön launched by Trisong Detsun in the 8th century.”…. http://yungdrung-rignga-ling.forums-free.com/the-3-drenpa-namkhas-t580.html

“Drenpa Namkha of Tibet was born in the year 753 AD in Southern Tibet. He was an accomplished practitioner and renowned scholar. During this time, the kingdom of Tibet was ruled by King Trisong Detsen. This king had many Bön priest in his court, including Drenpa Namkha. When the king decided to convert the kingdom to the new Indian religion of Buddhism, he began to drive out the Bön priests and to destroy their texts. The Bön lamas were given the choice of exile from the kingdom, suicide, or conversion to the new religion. Many lamas chose to escape with texts and to try and preserve the teachings elsewhere. Drenpa Namkha chose to stay and protect the teachings and the texts from within Tibet. So, at the age of 31, he cut his own hair with a blade of gold and ordained himself a Buddhist with these words, “A person who has attained realization would not make a distinction between his son and his enemy. I have no partiality for anything. Therefore, I shall be ordained.” ….After his conversion, he had many texts hidden within chortens, statues and columns at the monastery of Samye. He continued to compose texts and to teach. Among his many students was the king, Trisong Detsen himself. Years later, the king allowed him to openly return to his practice of the Yungdrung Bön teachings….(Translation by Samten Karmay from the Treasury of Good Sayings written by Shardza Tashi Gyaltsen.)

Moulin, Christophe (undated). History of Bön: The Propagation of Bön in Zhang-zhung and Tibet