"Though he is tremendously venerated, it seems that Rongzom is not very widely studied in modern Nyingma colleges." 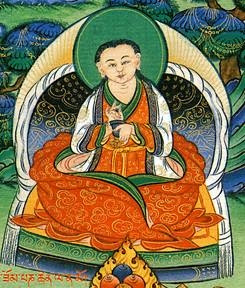 "Rongzom Chökyi Zangpo ... (Tibetan: རོང་ཟོམ་ཆོས་ཀྱི་བཟང་པོ, Wylie: rong zom chos kyi bzang po) (1012–1088) ... widely known as Rongzom Mahapandita or simply as Rongzompa, was one of the most important scholars of the Nyingma school of Tibetan Buddhism. Together with Longchenpa and Ju Mipham, he is often considered to be one of the three "omniscient" writers of the school. His elder contemporary Atiśa (980–1054) considered Rongzompa to be an incarnation of the Indian ācārya Kṛṣṇapāda, the Great. The Tibetan historian Gö Lotsawa (1392–1481) said of Rongzom that no scholar in Tibet was his equal."

"A.W. Barber writes that Rongzom was the first to receive the entire Dzogchen teachings of both Vimalamitra and Vairocana after the time of those two masters. According to the Blue Annals, Rongzom Chokyi Zangpo ... received the Semde (sems sde) teachings of the Dorje Dudjom transmission line.".....

David Germano writes "In the eleventh century, Rongzom Chokyi Zangpo was without doubt the greatest Nyingma author, with extensive exoteric and esoteric commentaries."

"Establishing the Divinity of Appearances (Tibetan: སྣང་བ་ལྷར་བསྒྲུབ, Wylie: snang ba lhar bsgrub) – a short text that presents the logical grounds for the pure view of Buddhist tantra. This text has been translated into English (Köppl, 2008)."

"Establishing Appearances As Divine: Rongzom Chökyi Zangpo On Reasoning, Madhyamaka, And Purity ........by Heidi I. Koppl......Rongzom Chökyi Zangpo's concise treatise, Establishing Appearances as Divine, sets out to prove the provocative point that everything that appears is actually the deity manifest. Transformation of both one's identity and the environment is an important principle of Tantric Buddhist philosophy. In Tantric scriptures, one is instructed to visualize oneself as a deity, a divine identity who resides in a perfect sphere. By repeatedly training in this visualization, one perfects the transformation and ultimately becomes the deity itself.

"Chökyi Nyima Rinpoche always stresses the importance of pure perception, explaining that all progress on the path of secret mantra depends on our ability to discover and maintain pure perception......'We then begin to get the sense that purity and divinity are something to be discovered rather than conjured'.... Both Mipham and Rongzom stress that purity and divinity have always been the case.......Heidi Koppl on the Importance of Rongzom...... by SHAMBHALAPUBS......http://blog.shambhala.com/2013/09/18/heidi-koppl-on-the-importance-of-rongzom/

"According to a catalog of the commentaries he codified, the collected works of Rongzompa amounted to over 100 volumes, the majority of which are no longer extant. In the 19th century, Ju Mipham, who was particularly influenced by Rongzompa's writings, attempted to gather the surviving works together."

"Rongzom Chökyi Zangpo (Wyl. rong zom chos kyi bzang po; Skt. Dharmabhadra) aka Rongzompa lived in the 11th century. His dates have been given as 1012-1088. He was born in Tsang rong and met Atisha in his youth. He mastered the teachings of both Nyingma and Sarma traditions. He translated many works on secret mantra, some of which are preserved in the Kangyur and some of which did not survive. Likewise, many of his original writings have sadly been lost, but among those which are still to be found today are his commentary on the Guhyagarbha Tantra, his introduction to mahayana called Introduction to the Way of the Great Vehicle (theg pa chen po'i tshul la 'jug pa) and his famous Establishing All Appearances as Divine (snang ba lhar sgrub). His commentary on The Secret Essence Tantra begins with the line: “The nature of the Three Jewels is the enlightened mind,” and so it became known as The Jewel Commentary. As well as his remarkable scholarship, he also manifested many signs of his deep realization. The historian Gö Lotsawa said of him: “In this snowland of Tibet no scholar has appeared who has been his equal.”......http://www.rigpawiki.org/index.php?title=Rongzom_Chökyi_Zangpo

"U-Tsang - the Cradle of Tibetan Culture......The name "U-Tsang" is a of place names. The word "U" refers to"Centre"in Tibetan, generally recognized as the area of Lhasa River Bank."Tsang" means"river"and as such refers to the extensive area from the west to the north of Shigatse. People in "Tsang" call themselves "Tsangpa", and those in "U" call themselves "Upa". "

"The Nyingma or “Ancient” school of Tibetan Buddhism, like the Bön, has the unusual distinction of basing its major tantric systems upon scriptures largely excluded from the Kangyur. The Nyingma response was to consolidate their tantras within their own compilation known as the Nyingmé Gyübum, or the Ancient Tantra Collection, a process that achieved increasing maturity in the fifteenth century. In its fullest editions, this collection nowadays includes around one thousand works, in about thirty-five thousand folios, or seventy thousand pages. The provenance and authenticity of the Nyingma tantras has been questioned in various ways from the turn of the eleventh century until the present day. Some considered them translated from Sanskrit, hence authentic; others considered them Tibetan compositions, hence inauthentic. Yet others, including the famous eleventh century Nyingma sage Rongzom Chökyi Zangpo, seemed to accept the possibility that they were compiled in Tibet, yet nevertheless deemed them authentic.5 Either way, the Nyingma tantras have had, and continue to have, a very powerful influence on Tibetan religion.".....http://www.thlib.org/collections/texts/jiats/#!jiats=/05/mayer/b2/

".......later Nyingma voices argued that these texts were indeed verbatim translations from Sanskrit originals from the reign of Tri Songdeutsen. By contrast, much (not all) modern scholarship locates them somewhat later, mainly after the collapse of empire around 842. Interestingly, the criterion of Indian provenance used by the compilers of the Kangyur to judge the authenticity of a tantra was not always fully accepted by Nyingmapa scholars, such as the influential Rongzompa. As Dorji Wangchuk puts it (Dorji Wangchuk, “An Eleventh-Century Defence of the Authenticity of the Guhyagarbha Tantra,” in The Many Canons of Tibetan Buddhism, edited by D. Germano and H. Eimer [Leiden: Brill, 2002], 282), “Rong zom pa’s response… does not categorically rule out the possibility of the tantra being a compilation or a composition by a Tibetan scholar… but rather addresses his opponents from a stance of spiritual ethics, trying to persuade them that in spite of such a possibility, one should approach the text with reason and respect on the basis of its scriptural coherency.” Wangchuk presents some passages from Rongzompa’s work; perhaps most pertinent is the point that the Buddhas need not be restricted by time or place, or to superior Buddha-like bodies, but arise in response to the needs of sentient beings. Thus (in Wangchuk’s translation), “even if tantric treatises are taught with overlaps and so on, and even if it is possible that they were compiled and composed by [Tibetan] Upādhyāyas, they should not be considered objects of doubt, for the ways the blessings of the tathāgathas appear are not restricted” (rgyud kyi gzhung ldab bu la sogs par ston pa dang / gal te mkhan po rnams kyis bsdus shing sbyar ba srid na yang / de bzhin bshegs pa’i byin gyis rlabs byung ba la tshul nges pa med pa yin pas the tshom gyi yul du bya ba ma yin no/; Wangchuk, “Eleventh-Century Defence,” 283-284).........http://www.thlib.org/collections/texts/jiats/#!jiats=/05/mayer/b2/#ixzz2zYt8MN7j