In the introduction to an English translation of selections from the Bonpo Book of the Dead, John Myrdhin Reynolds says, "The Homage, with which the Tibetan text opens, Kuntu bzang-po rang-rig gsal-bar ston la phyag 'tshal-lo, invokes the Primordial Buddha Kuntu Zangpo (...Skt. Samantabhadra) as being the Self-Awareness (rang-rig) which clearly reveals itself (gsal-ba 'iston) at the heart or core of every single individual sentient being.

“Dzongsar Khyentse Rinpoche following the Nyingmapa Dzogchen tradition qualifies the nature and essence of Samantabhadra, the Primordial Buddha, as the origin-less wellspring of the timeless and unbounded Atiyoga teachings, and honours the converse view entertained by some interested parties which hold that the Dzogchen teachings originated with either the Bonpo tradition or the Chinese monk Moheyan.”

'The Mirror of the Mind of Samantabhadra' (Tibetan: ཀུན་ཏུ་བཟང་པོ་ཐུགས་ཀྱི་མེ་ལོང, Wylie: kun tu bzang po thugs kyi me long) is one of the Seventeen Tantras of Dzogchen Upadesha.” 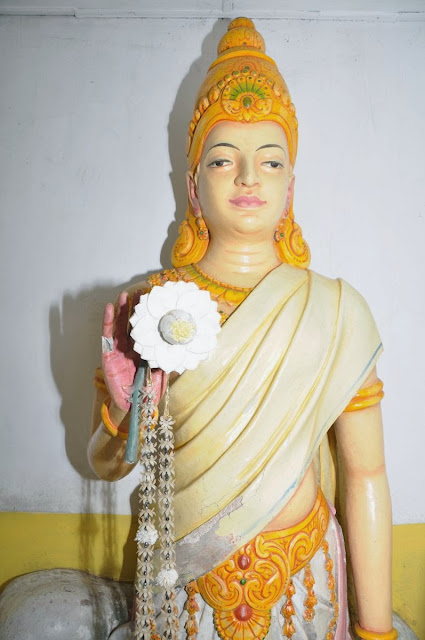 Sri Lanka……..Saman (deity)……..”Sri Lankan people venerates Samantabhadra Bodhisatva as Saman (also called Sumana, Samantha, Sumana Saman, Sinhalese: සුමන සමන් ‍දෙවි). The name Saman means "the rising morning sun". God Saman is considered one of the guardian deities of the island and Buddhism. His main shrine is located in Ratnapura, where there is an annual festival held in his honor. .”….The Gods & Deity Worship in Sri Lanka".

“According to Mahavansa, the great chronicle of Sri Lanka, Sri Pada mountain (also called Sumanakuta,Samangira,Samanthakuta and Samanalakanda) bears the impression of the Buddha's left foot, which he left on his third visit to the island (Mhv.i,77ff.). Some say that the name Samanthakuta means the "Peak of the God Saman". ……The Theravada Buddhists of Sri Lanka later made god Saman the guardian of their land and their religion. With the rise of Mahayana Buddhism, Saman was identified as Samantabhadra, one of the four principal bodhisattvas of Mahayana. Like Samantabhadra, Saman is usually depicted crowned and bejewelled, holding a lotus in his right hand and accompanied by a white elephant.”

“Kuntu Zangpo is better understood as the Primordial Buddha from which Lord Shenrab was emanated and took a human body for the benefit of all sentient beings. He is also referred to in Sanskrit by the name "Samantabhadra." The name Kuntu Zangpo means "that which is most excellent and present in all places." Thus the ancient texts refer to Kuntu Zangpo as being "Self-Awareness", "True Self" and "Source of the Self”.”

The religion of Sham (Sam) was considered "pagan" by the early Christians and Muslims......the cult of Sol Invictus (the Unconquered Sun), the worship of the divine spirit by whom the whole universe is ruled, the spirit whose symbol is the sun.....also the Solar Cosmology of Mithra……..Assyrian sun god.....Sham -ash, Ash-Sham.......rises from the mountains with rays out of his shoulders. He enters and exits the underworld through a set of gates in Mt. Mashu guarded by scorpion-people……..Ash-Sham in Syriac means "goodness" 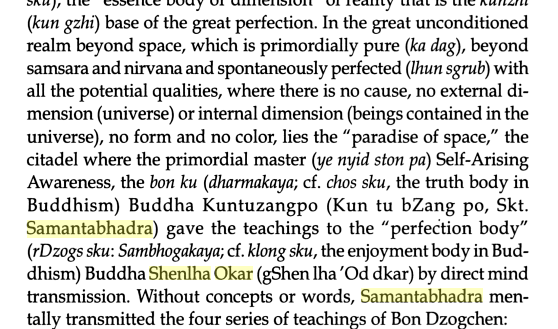 Wonders of the Natural Mind: The Essence of Dzogchen in the Native Bon ...By Tenzin Wangyal

Original Sanskrit Texts on the Origin and History of the People of India ...edited by John Muir