Kalachakra refers a Tantric deity (Tib. yidam) of Vajrayana Buddhism .... The consort of Kalchakra is called Vishvamata . She is in pratyalidha attitude. 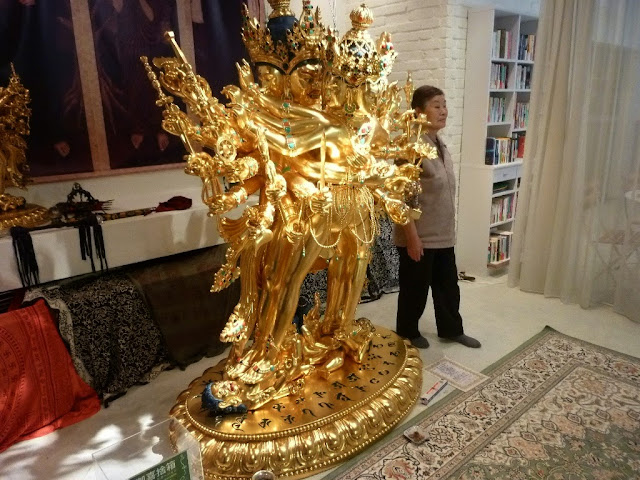 "The Kalachakra deity resides in the center of the Mandala in his palace consisting of four Mandalas, one within the other: the Mandalas of body, speech, and mind, and in the very center, wisdom and great bliss.....Kalchakra has four faces and tow legs . His front face is blue with bare fangs symbolizing anger , his right face is red embodying attachment , his left is white symbolizing peaceful state and his rear is yellow symbolizing calm abiding . Each has three eyes . His blue face is wrathful . He is adorned with may jewel ornaments , such as earrings , bracelets , necklace , crown , bangles and anklets and so on . He wears a tiger skin . Of his 24 arms , 12 arms are on each side . The first four arms are black , the middle red and the last four arms are white .".....http://www.ritualthanka.com 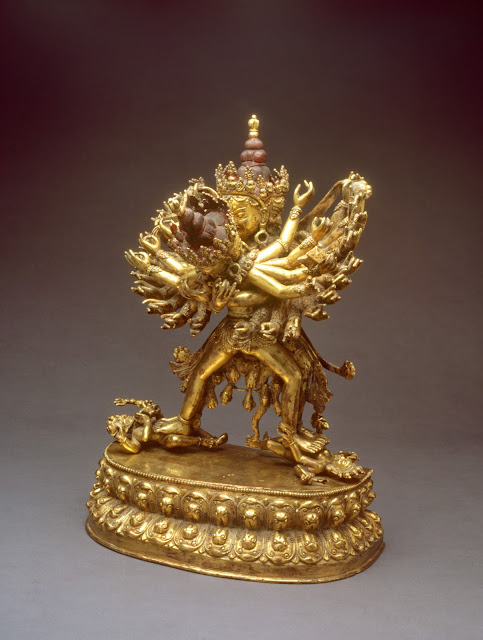 Vishvamata (World Mother)..... "Kalachakra and Vishvamata locked in passionate embrace, lovingly gazing at each other. Both figures are four-headed, with the lips and eyes on each face marked with pigments, lending added naturalism to the sculpture. Typical of Heruka Buddhas, Kalachakra strikes an energetic, lunging pose and Vishvamata mirrors his stance. Both figures wear elaborate jewellery, studded with brilliant blue turquoise and inlaid with semi-precious stones....Kalachakra’s twenty-four hands and Vishvamata’s eight, surrounding the couple like a golden aura, each originally held an attribute. Among the objects that survive in Kalachakra’s hands are the ‘vajra’ and bell, a partially broken sword, a flaying knife, a double-sided pellet drum, the Buddhist wheel, a ‘vajra’-tipped noose, a conch shell and a gem-encrusted jewel. In Kalachakra’s uppermost raised hand dangles the severed head of the four-faced Hindu god Brahma (‘Brahmakapala’). Although seemingly gruesome, this attribute symbolises Kalachakra’s infinite compassion towards all beings (Beer 1999: 309). Vishvamata holds a flaying knife and skull cup in her main hands hidden behind Kalachakra’s neck. Other implements that remain in her additional hands include a noose, a pellet drum, a lotus and a jewel. The figures’ striking pose, the intimacy they share and the dazzling display of arms create a dynamic tour de force.".....Chaya Chandrasekhar, ‘Goddess: divine energy’, pg.252.

"HISTORY OF THE KALACHAKRA.....Kalachakra is clearly related to the ancient Vedic tradition which existed long before Buddhism appeared....The Kalachakra refers to many different traditions, for example the Hindu; Saivite, Samkya, Vaishnava, the Vedas, Upanisads and Puranas traditions, but also Jainism. For example, the Kalachakra mandala includes deities which are equally accepted by Hindus, Jainas and Buddhists.....

Zurvanism....."Like the Kalachakra deity, the Iranian Zurvan carries the entire universe in his mystic body: the sun, moon, and stars. The various divisions of time such as hours, days, and months dwell in him as personified beings. He is the ruler of eternal and of historical time. White light and the colors of the rainbow burst out of him. His worshippers pray to him as “father-mother”. Sometimes he is portrayed as having four heads like the Buddhist time god. He governs as the “father of fire” or as the “victory fire”. Through him, fire and time are equated. He is also cyclical time, in which the world is swallowed by flames so as to arise anew".....http://www.american-buddha.com/aggres.myth.htm 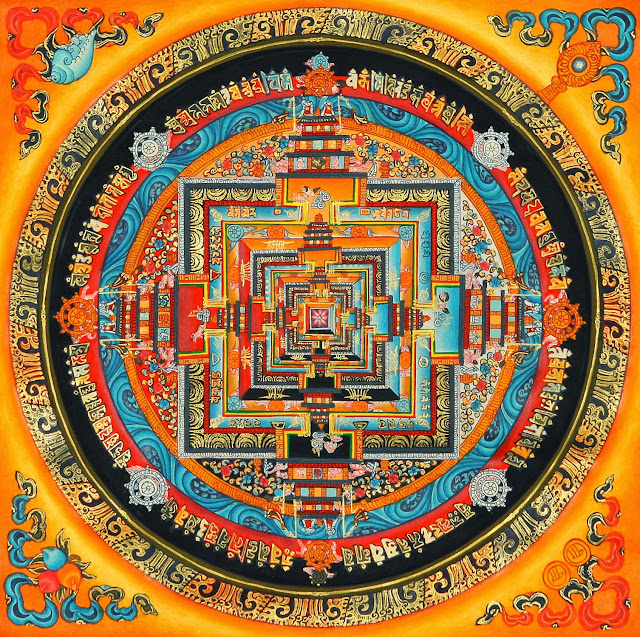 "...Kalachakra literally means “the wheel of Time”. It shows how the wheel of time unfolds events in the life of an individual. Parasara said that Lord Shiva explained this dasa to Goddess Parvati."....http://astroveda.wikidot.com/kalachakra-dasa

"Vedic Time System...... Kala (Time) is regarded as not linear or single-directional movement, like an arrow speeding from past to future. The idea of Time itself was quite advanced in Hindu Heritage. The Hindu concept talks of Rhythm or universal order which is manifested as Time. Time Rhythm range from the fast ticking of the atom to the expansion of the entire cosmos — Time unfolding within the geological process of the Earth the change of the season, the life cycle of a fly etc.......Kala (Time) itself is connected to Siva in Indian Heritage. Siva is called Maha Kala — “the great Time”. His consort Kali personifies the energy of Time.....Time (kala) is one of the five tattvas (realities) of existence which are the five subjects of the Bhagavad-gita. (The other ones are: isvara - God, jiva - living being, prakrti - material nature, and karma - material activity).."....http://veda.wikidot.com/vedic-time-system

"The Bhojakas, (600–700 C.E.), believed that they emanated from the body of their sun god. They also proclaimed themselves to be the descendants of Zarathustra. In India they created a mixed solar religion from the doctrines of the Avesta (the teachings of Zarathustra) and Mahayana Buddhism. From the Buddhists they adopted fasting and the prohibitions on cultivating fields and trade. In return, they influenced Buddhism primarily with their visions of light. Their “photisms” are said to have especially helped shape the shining figure of the Buddha Amitabha. Since they placed the time god, Zurvan, at the center of their cult, it could also be they who anticipated the essential doctrines of the Kalachakra Tantra.".....http://www.american-buddha.com/aggres.myth.htm

"Buddhism's Kalachakra uses the Hindu Vedic legend of Mount Meru (Avestan Hara Berezaiti) and surrounds Mount Meru with the mythic kingdom of Shambhala, a Sanskrit word meaning the land of peace. Shambhala, also spelt Shambala or Shamballa, is said to be the land of the Living Fire and Gyanganj, the home of immortal wisdom and the omniscient wise god of time (descriptions some use for Ahura Mazda, God, in Zoroastrianism). The concept, description and qualities of Shambala coincide with those for Arya Varta / Airyana Vaeja......" ....http://www.heritageinstitute.com/zoroastrianism/aryans/location.htm

"...according to Kuznetsov, the Indians used to name Iran and can be translated as "the holders of the world (good)." From Iran as the Indians borrowed the doctrine of eternal time (Zurvan Akarana), which then became the basis of the Buddhist Kalachakra......It is assumed that such a doctrine was created by the western Iranian Magi under the influence of the ancient Babylonian tradition, according to which the story is divided into long cycle times, and within each of them are recurring events.....s for the doctrine of the Kalachakra, it is, as suggested by Allen, comes from ancient Gandhara (area encompassing northern Pakistan and eastern Afghanistan). One of the areas of Gandhara — Uddiyana, located among the spurs of the Hindu Kush in northern Pakistan, is considered the cradle of Tantric Buddhism. Visited this valley in 629 Chinese pilgrim Xuanzang was surprised to find there the remains of almost a thousand Buddhist monuments (monasteries, stupas) and settlements, suggesting a fantastic flourishing of Buddhism in Uddiyana in the preceding period (II-V century)."....http://survincity.com/2011/02/shambhala-the-mystical-and-the-real/ 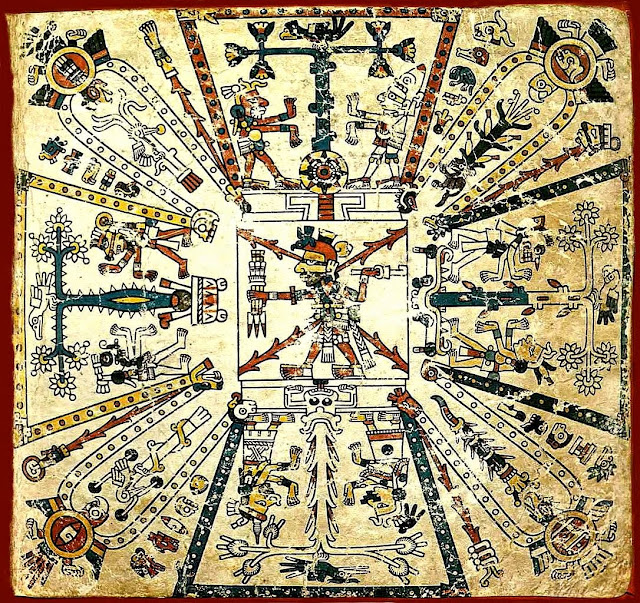 "...Cronus (the Greek), Zurvan (the Persian), Xiuhtecuhtli (the Aztec) and Kalachakra (the Hindu).....Cronus is associated with Time, Chronos (Kronos, Cronus, and Cronos) is the Greek god of time, Fertility, Chaos and Prophecy......Xiuhtecuhtli is associated with Fire, Earth and Time......Zurvan is associated with Time, Psychopomp, Justice and Guardian......Kalachakra is associated with Time, War and Prophecy....Egyptian Atem, the Mother Goddess of Time..... the Aztec god of time (Tonatiuh, pictured in the center of the Aztec calendar stone), which destroys everything. As the sun was associated with the passage of time, so Aton-at-i-uh personified both the supreme solar and temporal deity. The real name of the Calendar Stone was Cuauhtlixicalli (literally, the “House of the Eagle,” the “Eagle Bowl,” or, closest to the real meaning of its name, “The Vessel of Time”)....Kali the Hindu goddess of time....Mahakala is the Japanese name for Shiva as the god of time ....Menat is a Middle East goddess of time (Also known as Manat). Her father is Allah....Orus, or Horus as he is more generally known, was the son of Isis and Osiris. He was the god of time....In the Egyptian ritual, Seb, the god of time and of the Earth, is spoken of as having laid an egg, or the Universe....Zervan (also as Zurvan, Zrvan, _ ‘time’) was the Iranian god of time, the creator of all the paths which lead to the Cinvat bridge – the crossing-point into the Beyond. In Zervanism, which was spread by magi, he figured as the supreme god...."....