"When the Blessed One had said this, venerable Shariputra and noble Avalokiteshvara, the bodhisattva mahasattva, that whole assembly and the world with its gods, humans, asuras, and gandharvas rejoiced and praised the words of the Blessed One. "......http://mahajana.net/teksty/sutra_serca/heart_sutra_en.html 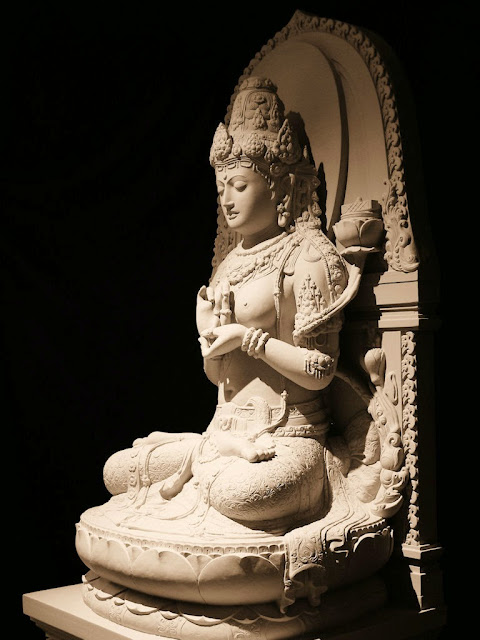 "Prajnaparamita is a goddess of high standing in Mahayana tantric Buddhism; she is considered the sakti, or consort, of the highest Buddha (in the Buddhist pantheon known as vajradhara), she symbolizes perfect knowledge." 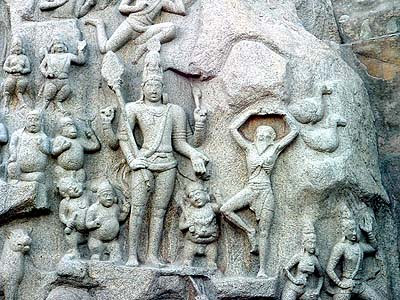 "Gandharva is a name used for distinct heavenly beings in Hinduism and Buddhism.....In Hinduism, the gandharvas (Sanskrit: गन्धर्व, gandharva) are male nature spirits, husbands of the Apsaras. Some are part animal, usually a bird or horse. They have superb musical skills. They guarded the Soma and made beautiful music for the gods in their palaces. A gandharva means a singer in the court of Gods.....In Hindu theology, gandharvas act as messengers between the gods and humans...Gandharvas are mentioned extensively in the epic Mahabharata as associated with the devas (as dancers and singers) and with the yakshas, as formidable warriors.".....https://en.wikipedia.org/wiki/Gandharva

"In Buddhism......A gandharva (Sanskrit) or gandhabba (Pāli) (Japanese: 乾闥婆 Kendatsuba) is one of the lowest-ranking devas in Buddhist cosmology. They are classed among the Cāturmahārājikakāyika devas, and are subject to the Great King Dhṛtarāṣṭra, Guardian of the East. It was considered embarrassing for a monk to be born in no better birth than that of a gandharva....Gandharvas can fly through the air, and are known for their skill as musicians. They are connected with trees and flowers, and are described as dwelling in the scents of bark, sap, and blossom. They are among the beings of the wilderness that might disturb a monk meditating alone.....The terms gandharva and yakṣa are sometimes used for the same person; yakṣa in these cases is the more general term, including a variety of lower deities..."...https://en.wikipedia.org/wiki/Gandharva

"Gandharvas (from the Sanskrit: गंधर्व, gandharva, possibly meaning "fragrances") refers to a group of low-ranking male nature dieties that appear in both Hindu, Buddhist, and sometimes even Jain mythology. In all three traditions, the gandharvas are closely related to the wilderness as well as the creative arts, particularly music. Gandharvas also have symbolic connections with procreation and sexuality.....

"One of the early Buddhist schools, the Mahāsāṃghika-Lokottaravāda, were known to be prominent in the area of Bamiyan. The Chinese Buddhist monk Xuanzang visited a Lokottaravāda monastery in the 7th century CE, at Bamiyan, Afghanistan, and this monastery site has since been rediscovered by archaeologists. Birchbark and palm leaf manuscripts of texts in this monastery's collection, including Mahāyāna sūtras, have been discovered at the site, and these are now located in the Schøyen Collection. Some manuscripts are in the Gāndhārī language and Kharoṣṭhī script, while others are in Sanskrit and written in forms of the Gupta script. Manuscripts and fragments that have survived from this monastery's collection include well-known Buddhist texts such as the Mahāparinirvāṇa Sūtra (from the Āgamas), the Diamond Sūtra (Vajracchedikā Prajñāpāramitā), the Medicine Buddha Sūtra, and the Śrīmālādevī Siṃhanāda Sūtra."......http://en.wikipedia.org/wiki/Pre-Islamic_period_of_Afghanistan

"It is speculated that another super human tribe called the Gandharvas were originally inhabitants of the Gandhara kingdom. Gandharvas were well versed in music and art. This explains why there is much Gandhara influence in Indian Classical Music. Gandhara form of sculpturing is also famous (very close to Greek sculpturing).....Gandhara is a kingdom grouped among the western kingdoms in the epic Mahabharata. The epic Ramayana also mentions it as a western kingdom...... 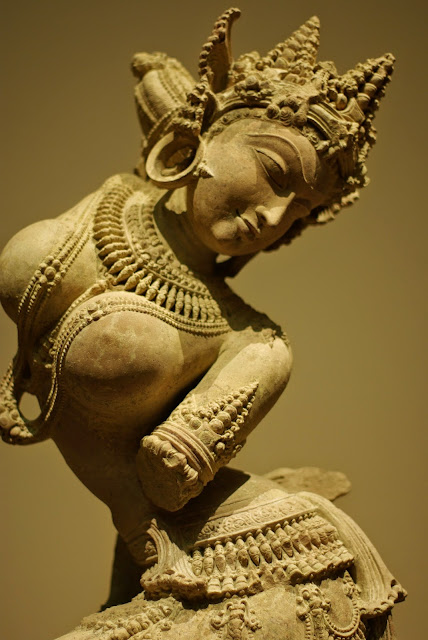 "An Apsara is a female spirit of the clouds and waters in Hindu and Buddhist mythology....English translations of the word "Apsara" include "nymph," "celestial nymph," and "celestial maiden.".....Apsaras are beautiful, supernatural female beings. They are youthful and elegant, and superb in the art of dancing. They are often the wives of the Gandharvas, the court musicians of Indra. They dance to the music made by the Gandharvas, usually in the palaces of the gods, entertain and sometimes seduce gods and men. As ethereal beings who inhabit the skies, and are often depicted taking flight, or at service of a god, they may be compared to angels......Apsaras are said to be able to change their shape at will, and rule over the fortunes of gaming and gambling. Urvasi, Menaka, Rambha and Tilottama are the most famous among them. Apsaras are sometimes compared to the muses of ancient Greece, with each of the 26 Apsaras at Indra's court representing a distinct aspect of the performing arts. They are associated with fertility rites. There are two types of Apsaras; Laukika (worldly), of whom thirty-four are specified, and Daivika (divine), of which there are ten."