"According to Kuznetsov, Bon was introduced to Tibet in the fifth century BC, when there occurred a mass migration of Iranians from Sogdhiana in north-east Iran to the northern parts of Tibet. They brought with them an ancient form of polytheistic Mithraism and the Araimic alphabet, named after Aramaiti, the Iranian Earth Goddess." .....(June Campbell: "Traveller in Space" 1968)... 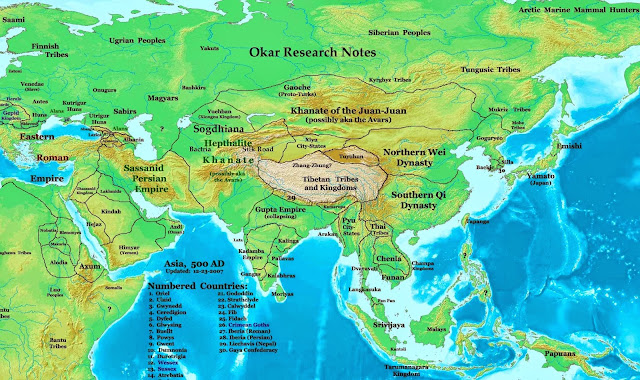 SOGDIANA...(Suli)...the fertile lands between the Oxus and Jaxartes. The district surrounding Samarkand. One of the four earthly paradises. Bukhara was the religious center 150 miles west of Samarkand. (LeStrange: 1966..pg 460)...Ruled by Greek Seleucids after Alexander...the area around Lake Aral...Sogdian is a Middle Iranian language...

"Sogdiana (pron.: /ˌsɔːɡdiˈænə/ or /ˌsɒɡdiˈænə/) or Sogdia (pron.: /ˈsɔːɡdiə/ or /ˈsɒɡdiə/; Old Persian: Suguda-; Ancient Greek: Σογδιανή, Sogdianē; Persian: سغد‎ Soġd; Tajik: Суғд, سغد Suġd; Uzbek: Sơģd; Chinese: 粟特 Sùtè) was the ancient civilization of an Iranian people and a province of the Achaemenid Empire, eighteenth in the list on the Behistun Inscription of Darius the Great. Sogdiana is "listed" as the second of the "good lands and countries" that Ahura Mazda created. This region is listed second after Airyanem Vaejah, "homeland of the Aryans", in the Zoroastrian book of Vendidad, indicating the importance of this region from ancient times. Sogdiana, at different times, included territories around Samarkand, Bukhara, Khujand, Panjikent and Shahrisabz in modern Tajikistan and Uzbekistan."......http://en.wikipedia.org/wiki/Sogdiana

"The Sogdian states, although never politically united, were centered around the main city of Samarkand. Sogdiana lay north of Bactria, east of Khwarezm, and southeast of Kangju between the Oxus (Amu Darya) and the Jaxartes (Syr Darya), embracing the fertile valley of the Zeravshan (ancient Polytimetus). Sogdian territory corresponds to the modern provinces of Samarkand and Bokhara in modern Uzbekistan as well as the Sughd province of modern Tajikistan.".......http://en.wikipedia.org/wiki/Sogdiana

"Hellenistic period.......An independent and warlike Sogdiana[2] formed a border region insulating the Achaemenid Persians from the nomadic Scythians to the north and east.[3] The Sogdian Rock or Rock of Ariamazes, a fortress in Sogdiana, was captured in 327 BC by the forces of Alexander the Great; after an extended campaign putting down Sogdian resistance and founding military outposts manned by his Macedonian veterans, Alexander united Sogdiana with Bactria into one satrapy."..... http://en.wikipedia.org/wiki/Sogdiana

"The Sogdian script was an offshoot of the Aramaic script adopted to write Sogdian, a Middle Iranian language related to Pahlavi (or Middle Persian). It was primarily used in the area around the ancient city of Samarkand, which roughly corresponds to the modern country of Uzbekistan, but a substantial corpus also comes from the oasis town of Turfan in the Xinjiang Uighur Autonomous Region in modern China where many Sogdians settled. Almost certainly this was where the Uighur adopted their script."......http://www.ancientscripts.com/sogdian.html

"As they fled east, the Persians first took refuge in Sugd (Sogdiana) and their presence there has been recorded on Sogdian inscriptions in Panjakand and Paykand. Then as the Persians and Sogdians continued east into China, their presence during the ninth century was recorded on a Chang’an funerary stele belonging to Mahshi Suren.....Author A. Nikitin has proposed that the rise of Tibetan power was because of the assistance of Persian refugees fleeing from the Arab invasion of Persia in the 650s CE. According to Nikitin, when the Persians arrived in the Tibetan court, they trained the Tibetans in the art of imperial warfare. According to another author Beckwith, a Chinese source describes the Yarlung Tibetan warriors and horses as being completely clad in armour in the Sassanian fashion. An important military technological advance and advantage for the Tibetans was their newly acquired ability to produce chain mail for armour.".....http://zoroastrianheritage.blogspot.com