Abaris the Skywalker, The Avars (6th C. BC)

"Abaris the Hyperborean (Greek: Ἄβαρις Ὑπερβόρειος, Abaris Hyperboreios), son of Seuthes, was a legendary sage, healer, and priest of Apollo known to the Ancient Greeks. He was supposed to have learned his skills in his homeland of Hyperborea, near the Caucasus, which he fled during a plague. He was said to be endowed with the gift of prophecy, and by this as well as by his Scythian dress and simplicity and honesty he created great sensation in Greece, and was held in high esteem......According to Herodotus he was said to have traveled around the world with an arrow symbolizing Apollo, eating no food. Heraclides Ponticus wrote that Abaris flew on it. Plato (Charmides 158C) classes him amongst the "Thracian physicians" who practice medicine upon the soul as well as the body by means of "incantations" (epodai). A temple to Persephone at Sparta was attributed to Abaris by Pausanias (9.10). Alan H. Griffiths compares Abaris to Aristeas in terms of being a "shamanistic missionary and savior-figure" and notes Pindar places Abaris during the time of Croesus.".....https://en.wikipedia.org/wiki/Abaris_the_Hyperborean

"“Abaris was a priest of Apollo who, with the help of that god, fled from Scythia (in the Caucasus) to Greece to avoid a plague. Apollo gave him a golden arrow which cured diseases and spoke oracles. The arrow also rendered the priest invisible and made him ride through the sky. Abaris later gave the dart to Pythagoras. He is mentioned by Herodotus and Pindar and surnamed ‘the Hyperborean’.” “Abaris.” Encyclopedia Mythica from Encyclopedia Mythica Online.

Abaris the Skywalker..... In the sixth century BCE, before the beginning of classical Greek civilization, a mysterious man was traveling in a circle encompassing Greece, not stopping to eat or drink except at the sanctuaries of the Gods. He traveled swift as the wind — some said his feet didn’t touch the ground — banishing pestilence and purifying the land. He held a peculiar sort of golden arrow, by which he traveled. They said he was possessed by Apollo and came as a prophet and envoy from Hyperborea, the land beyond the North Wind especially dear to Apollo (most likely northern Asia). 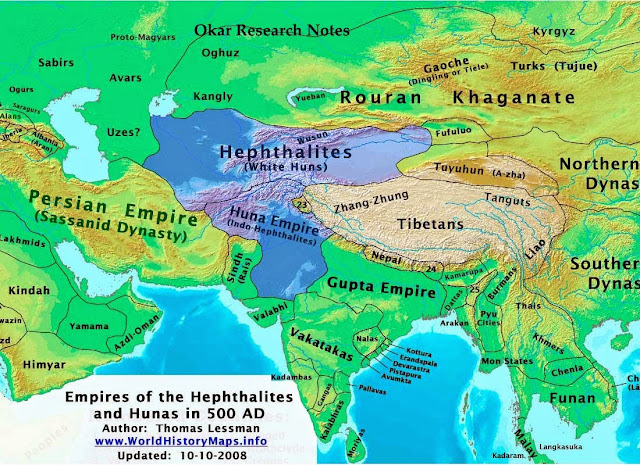 His name was Abaris, which simply means “the Avar,” referring to the nomadic bowmen of Central Asia. This is according to classical scholar Peter Kingsley’s exquisite and well-documented new book, A Story Waiting to Pierce You, a source for much of this article. Abaris was called a Skywalker (Grk. aithrobatês), the Greek translation of words common in Tibet and Central Asia to describe shamans, but also arrows (e.g., Tib. khandro).
One early account of the Avar Skywalker says that Apollo himself had given him the arrow, which was made of gold and unusually bulky. But the Greek word belos, often translated “arrow,” can also refer to a dart, javelin, or any terrifying missile that strikes from afar. (One of Apollo’s common epithets is Hekêbolos — Far-Darter — for his arrows strike out of nowhere, bringing pestilence, but also sudden cures, inspiration, and illumination.) Kingsley argues that Abaris’ golden dart was a Phurba, the three-bladed ritual dagger of Central Asian and Tibetan shamans, of Tibetan Buddhists, and of Indian Vedic practitioners. As will be explained shortly, it is simultaneously arrow, dart, dagger, and stake.
To traverse the thousands of miles from Hyperborea to Greece, Abaris would have traveled in an ecstatic trance, like the Tibetan “wind walkers,” whose feet scarcely touch the ground, if at all. Complete inner stillness and control of subtle energies (using lung-gom-pa, the “wind-energy meditation”) enables superhuman outer abilities. He would have flown across the landscape, carried by his Phurba, held in front, in the same way that water witches are dragged about by their willow wands.
Apollo had given Abaris the golden arrow as a token of divine sanction. He was described as an ambassador from the Hyperboreans, which is unsurprising when we learn that Mongol ambassadors were sent with a golden arrow as a token of trust from the Khan, often conferring spiritual authority on its recipient. These envoys fly like magical arrows to their destinations, penetrating all obstructions, finding their way unerringly. Ancient sources say explicitly that Abaris traveled in a circle around Greece, and the Central Asias called their envoys “arrow circulators,” which is also how they were described by Chinese observers (chuanjian, chuanjian dahua, chuanjian tonghua)."....Kingsley, Peter. A Story Waiting to Pierce You: Mongolia, Tibet, and the Destiny of the Western World. Point Reyes: Golden Sufi, 2010.

"Hyperborea was usually described as a continent-bound land, bordered by the great earth-encircling river Okeanos to the north, and the great peaks of the mythical Rhipaion mountains to the south. Its main river was the Eridanos, which flowed south, drawing its waters directly from the Okean-stream. The shores of this stream were lined by amber-bearing poplar trees and its waters inhabited by flocks of white swans. Blessed with eternal spring, the land producing two crops of grain per year. But most of the country was wild, covered with rich and beautiful forests, "the garden of Apollon......To the south the realm was guarded by the bitterly cold peaks of the near-impassable Rhipaion mountains. The peaks of the mountains were also the home of Griffins (eagle-lions), and its valleys were inhabited by the fierce, one-eyed Arimaspoi tribe.... Their capital contained a circular temple dedicated to the god.....the musical race also celebrated his divinity with a constant festival music, song and dance....stories connected the Hyperboreans with the founding of several important religious shrines in ancient Greece. In the distant past the god-blessed race was said to have sent many holy prophets and pilgrims into Greece...... the most famous prophet of the Hyperboreans was a man named Abaris, who was given a magical arrow by the god Apollon on which he flew around the world performing miracles. Some say this arrow was the one which Apollon had used to slay the Kyklopes, which he had hidden beneath a Hyperborean mountain."....http://www.theoi.com/Phylos/Hyperborea.html

"Suidas s.v. Abaris (trans. Suda On Line) (Byzantine Greek lexicon C10th A.D.) : Abaris: Skythian, son of Seuthes. He wrote the so-called Skythinian Oracles and Marriage of the river Hebros and Purifications and a Theogony in prose and Arrival of Apollon among the Hyperboreans in meter. He came from Skythia (Scythia) to Greece. The legendary arrow belongs to him, the one he flew on from Greece to Hyperborean Skythia. It was given to him by Apollon."