"Paropamisadae......the Greek name for the region south of the Hindu Kush in the southeastern part of present-day Afghanistan. From the sixth to the fourth century B.C., Paropamisadae was part of the Achaemenid empire and the empire of Alexander the Great. It later became part of the Greco-Bactrian and Kushan kingdoms."....The Great Soviet Encyclopedia, 3rd Edition (1970-1979).

"The land of Aryana included Media, Persia, the deserts of Gedrosia and Carmania, that is, the provinces of Carmania, Gedrosia, Drangiana, Arachosia (Strabo 11.10.1 ), Aria, the Paropamisadae, Bactria (called the ornament of Ariana), Apollodorus of Artemita (Strabo 11.11.1) and Sogdiana where Zarathushtra is said to have preached Ahura Mazda's laws "among the Arianoi" (cf. Diodorus 1.94.2). These observations reconfirm the sixteen nations of the Vendidad as being part of the Greater Aryan nation and add to that list of nations the later more modern nations of Persia, Media, Carmania (Kerman) and Chorasmia. This Greater Ariana formed the core of the Persian Empire. Aelianus in De natura animalium 16.16, also mentions that there were "Indian Arianians" and there is some suggestion that control of Ariana fluctuated between Indian and Arian Arianians.".....http://www.heritageinstitute.com/zoroastrianism/aryans/airyanavaeja.htm 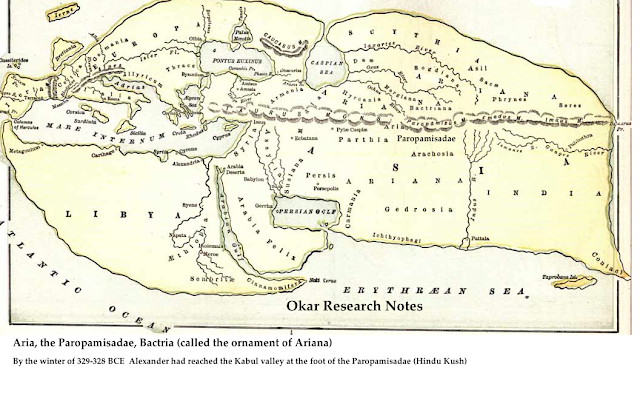 "Paropamisadae (Greek: Παροπαμισάδαι) or Paropamisus was the ancient Greek name for a region of the Hindu-Kush (Caucasus Indicus) in eastern Afghanistan, centered on the cities of Kabul and Kapisa (modern Bagram)....In the ancient Buddhist texts, the Mahajanapada kingdom of Kamboja compassed the territories of Paropamisus and extended to the southwest of Kashmir as far as Rajauri. The region came under Achaemenid Persian control in the late 6th century BC, either during the reign of Cyrus the Great or Darius I.....In the 320s BC, Alexander the Great conquered the entire Persian Empire, beginning the Hellenistic period. The Greek name Παροπαμισάδαι or Παροπαμισσός was used extensively in Greek literature to describe the conquests of Alexander and those of the Greco-Bactrian and Indo-Greek kings, from the 3rd to the 1st centuries BCE. (The name possibly comes from an Avestan expression for "higher than an eagle can fly").......https://en.wikipedia.org/wiki/Paropamisadae

"After Alexander's death in 323 BC, the area came under control of the Seleucid Empire, which gave the region to the Mauryan Dynasty of India in 305 BC. After the fall of the Mauryans in 185 BC, the Greco-Bactrians under King Demetrius I annexed the northwestern regions of the former Mauryan Empire, including Paropamisadae, and it became part of his Euthydemid Indo-Greek Kingdom. The Eucratidians seized the area soon after the death of Menander I, but lost it to the Yuezhi or Tocharians around 125 BC".....https://en.wikipedia.org/wiki/Paropamisadae

"The Paropamisadae was located north of Arachosia and Drangiana, east of Aria, south of Bactria, and west of Kashmir. There were two main rivers flowing through the land, the Coas or Cophen (Κωφήν) and the Dorgamanes (Δοργαμάνης) or Orgomanes (Ὀργομάνης) farther north.

The name Paropamisadae was originally used to refer to the collection of peoples inhabiting the region, and was later used as a toponym for the area itself. These nations were: the Cabolitae (Καβολῖται) in the north near modern Kabul; the Parsii (Πάρσιοι) in the northwest, the Ambautae (Ἀμβαῦται) in the east and the Par(g)yetae (Παρ(γ)υῆται) in the south, who were also found in Arachosia. The major cities of the land were the city of Ortospana (Ὀρτοσπάνα) or Carura (Κάρουρα), probably identifiable with Kabul, Gauzaca (Γαύζακα), probably modern Ghazni, Capissa (Καπίσσα) in the northeast, and Parsia (Παρσία), the capital of the Parsii.".....https://en.wikipedia.org/wiki/Paropamisadae

"PAROPAMISADAE (Παροπαμισάδαι or Παροπανισάδαι), the collective name of a number of small tribes who lived alone the, spurs of the great chain of the Paropamisus (Hindú Kúsh), and chiefly along its southern and eastern sides. The district they inhabited, which was called generally ἡ Παροπαμισάδων χώρα (Arrian, Arr. Anab. 5.3), was bounded on the W. by Ariana, on the N. by Bactriana, on the E. by the Indus and Panjdib, and on the S. by Arachosia. It comprehended therefore the whole of Cabulistán, and a considerable portion of Afghanistán. The two principal rivers of this district were the Dargamenes (now Gori) and Cophen (Cábul river). The population appears to have been a free independent mountain race, who never till the time of Alexander had been compelled to submit to a foreign ruler. During the Persian dominion of Asia, as the Paropamisadae are not mentioned, it may be-presumed that they remained unsubdued. Their chief tribes were the Bolitae (perhaps Cabolitae, the inhabitants of Cábul), the Ambautae, Parsii, and Paryetae or Pargyetae (Ptol. 6.18.3). Their chief towns were Ortespanum (Cábul), Alexandreia (perhaps Bamián), Gauzaca, and Capissa or Caphusa. The valleys between the mountains, though exposed to great cold during the winter, were very fertile. (Strab. xvi. p.725; Curt. 7.3.15.)".....http://www.perseus.tufts.edu/hopper/text?doc=Perseus:text:1999.04.0064:entry=paropamisadae-geo

“Parts of Nuristan (Kafirstan) formed a portion of Greek satrapy of the Paropamisadae in the fourth and third c B.C. The People were then called Kambojas and described as of mixed Indo-Iranian descent.

Indo-Greek kingdom.....Following the 125 BCE invasion of the Paropamisadae and Arachosia by the Greco-Bactrian king Heliocles, son of Eucratides, the descendants of Euthydemus retreated to their territories from Gandhara to Mathura in the east, where they ruled until around 100 BCE.

"The name of the Paropamisadae can be given an Iranian etymology, "(the land) beyond (the land) above the eagle/falcon," and would thus indicate an appellation given to the country by (Iranian) people living to the north of the Hindu Kush, namely in or near ancient Bactria (q.v.).

Alexandria of the Caucasus.....was built on top of Kapiša-kaniš (pronounced "Kapish-Kanish"), capital of the Persian satrapy of Gandara (although it is not known whether Gandara was still a part of the Achaemenid empire when Alexander took it), and populated with some 4000 natives and 3000 veteran Greeks in March 329 BC...... Alexandria of the Caucasus ( Askandria-e-Qafqaz or Askandria Paro paizad) was a city founded by Alexander the Great (one of many given the name Alexandria), at an important junction of communications in the southern foothills of the Hindu Kush, about 45 miles North of Kabul, in the country of the Paropamisadae.

The two chief cities of Bactria, Aornos (Tashkurghan) and Bactra (Balkh), surrendered without resistance in the spring of 329 B.C. Establishing a base camp at Bactra, Alexander pursued the rebels across the Oxus.