"Nasrudin, Do any of your students ever get enlightened?"
"Sure, many of them."
"Really? how do you know?"
"Simple. they stop following me or anyone else and the endless talk about 'enlightenment', 'teachings' and 'teachers'. they go on with their life, and do what they have to do..." 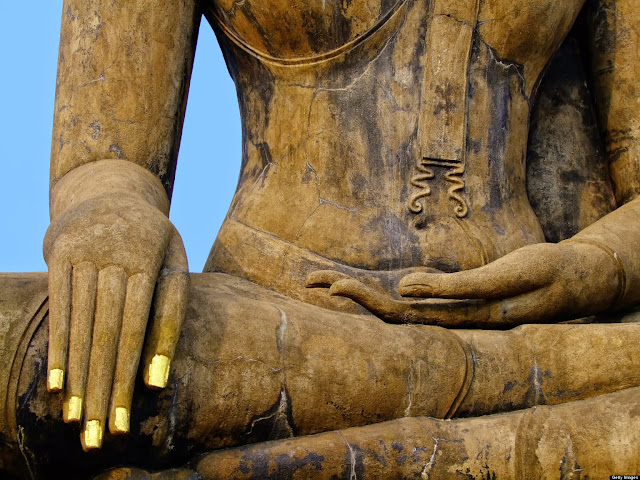 "...usually dzogchen comes at the end, but Trungpa Rinpoche had it at the beginning, so maybe we can do things correctly and have it at the end. Early on, he said in order to have an enlightened world, it has to look enlightened. He said all those other cultures had a look. Japan has a look. China has a look. Tibet had a look. Greece had a look. Egypt had a look. These cultures were like enlightened cultures and had a cool look, you know, that everybody agreed on.".....http://www.chronicleproject.com/stories_119.html

Bhumisparsha (Earth Witness) Mudra..."Bhumisparsha means 'touching the earth'. It is more commonly known as the 'earth witness' mudra. This mudra, formed with all five fingers of the right hand extended to touch the ground, symbolizes the Buddha's enlightenment under the bodhi tree, when he summoned the earth goddess, Sthavara, to bear witness to his attainment of enlightenment."....http://www.religionfacts.com/buddhism/symbols/mudra_bhummisparsha.htm

"In Chögyam Trungpa's view not only was individual enlightenment not mythical, but Shambhala Kingdom referred to an enlightened society that could in fact be actualized. The practice of Shambhala vision is to use mindfulness/awareness meditation as a way to connect with one's basic goodness and confidence. It is presented as a path that "brings dignity, confidence, and wisdom to every facet of life." .....http://en.wikipedia.org/wiki/Chögyam_Trungpa

"Shambhala vision is described as a non-religious approach, rooted in meditation and accessible to individuals of any, or no, religion. In Shambhala terms, it is possible, moment by moment, for individuals to establish enlightened society.".....Shambhala: The Sacred Path of the Warrior

"Enlightenment or Awakening (Skt. bodhi; Tib. changchup; Wyl. byang chub/Tib. sangyé; Wyl. sangs rgyas).....Sangyé.....The Tibetan term for Buddha, Sangyé, is explained as follows: Sang means ‘awakening’ from the sleep of ignorance, and ‘purifying’ the darkness of both emotional obscurations and cognitive obscurations......Gyé means ‘opening’, like a blossoming lotus flower, to all that is knowable, and ‘developing’ the wisdom of omniscience—the knowledge of the true nature of things, just as they are, and the knowledge of all things in their multiplicity.".....http://www.rigpawiki.org/index.php?title=Enlightenment

"Enlightenment is of three kinds: the enlightenment of shravakas, pratyekabuddhas and fully enlightened buddhas.......Sanskrit word shravaka, means 'one who hears and proclaims'.......Pratyekabuddhas (Skt.; Tib. rang sangyé; Wyl. rang sangs rgyas), or 'solitary realisers', are followers of the basic vehicle who attain the level of a pratyekabuddha arhat by themselves, in solitude........Buddha, means anyone who has completely awakened from ignorance and opened to his or her vast potential for wisdom.".....http://www.rigpawiki.org/index.php?title=Enlightenment

"A controversy over two apparently opposed approaches to enlightenment runs throughout the history of Tibetan Buddhist thought. Broadly stated, the first position, “the simultaneous approach” (cig car gyi ‘jug pa) was that the cessation of dualistic conceptualisation in meditation was sufficient cause for enlightenment, without any need for the graduated, and much more lengthy, practices of the six pāramitā. On the other hand, the second position, “the gradual approach” (rim gyis ‘jug pa) was that those practices were indispensable..... The conflict between these two approaches was, according to Tibetan tradition, settled in the eighth century in a formal debate. Whether the debate actually occurred as such has been called into doubt, but there is no question of the importance of the legend of the debate to the Tibetan tradition. According to the Tibetan histories, the debate was arranged in Samyé temple in the late eighth century to determine whether Tibet would accept Indian or Chinese Buddhism as normative. In the stories of the debate, the Indian side was identified with gradualism and the Chinese side with simultaneism, a greatly simplified version of the complexities of early Buddhist influences on Tibet which nonetheless became widely accepted in Tibet. According to tradition, the Indian Buddhist scholar Kamalaśīla, arguing for the gradualist position, opposed an Chinese monk called Hashang Mahāyāna, who was arguing for the simultaneist position. In the Tibetan versions of the story, Hashang was defeated, and his method rejected......Hashang’s defeat was put to polemical use against certain Tibetan practice traditions, in particular the Mahāmudrā (phyag chen) of the bKa’ brgyud school and the Great Perfection (rdzogs chen) of the Nyingma school. The Great Perfection’s teachings on technique free meditation were subject to accusations of being no more than the simultaneous method of Hashang."...http://earlytibet.com/about/hashang-mahayana/

"Suzie Gomez from the Taos Pueblo. I remember two things from that meal. One is that when Rinpoche sat next to Suzie Gomez, they looked like siblings. They were the same shape, color, roundness, hair color ... they just looked so much alike, and they spent the whole time talking about similarities in their cultures; they even found some common words in Pueblo and Tibetan......Suzie Gomez is the daughter in-law of Little Joe Gomez, a native American spiritual leader who Rinpoche met and appreciated very much.... for whom he felt a great affinity, recognizing in him a very high-level realization."....http://shambhalatimes.org/2009/03/02/opening-communication-with-other-authentic-traditions/

JAMGON KONGTRUL (Lodro Taye: 1813-1899)..."One may wonder why this description of the universe does not accord with that of other systems. The Enlightened Ones did not view any aspect of either the environment or the inhabitants of our world system as ultimately real. Therefore, the teachings are not one that, based on a belief in a single view, sets forth a particular system as the only valid one. Instead, they spoke in response to the various levels of capabilities, interests, and dispositions of those to be guided to enlightenment." ...(Jamgon Kongtrul:Myriad Worlds...1995..pg 166).

"BUDDHA (Skt. = Tib. sangyé). Awakened one; person who has achieved enlightenment (Skt. bodhi, Tib. changch’ub)....Key Mahayana emphases are on the partial and selfish nature of the ARHAT‘s enlightenment as compared with that of a fully-enlightened BUDDHA.....".....http://users.hunterlink.net.au/~mbbgbs/Geoffrey/budgloss.html

"Purity of karma, putative rebirth, degree of meditation-concentration, facility in visualization, levels of attainment, and so on, are all issues pertinent to acceptance and success within a hierarchical cult....but to the formless experience of Dzogchen, such considerations have no relevance...any kind of preparation or fore-practice muddies the waters..."....(p. 7....From "Natural Perfection, Longchenpa's Radical Dzogchen" ....Translation and Commentary by Keith Dowman...Published in 2010 (Wisdom Publications Boston))

"It is an error of interpretation, however, to believe that Dzogchen requires rejection of religious devotions or ritual practice. The sacred and the profane have the same weight in the Dzogchen view, and the temple or church and the beer-hall or gymnasium are equal.....no Buddhist conditioning, ritual worship, or lifestyle, nor Christian or Jewish devotions, provides any more or less fertile ground for recognition of the nature of mind than the lifestyle of an agnostic professional or a self-indulgent hedonist...."(p. 7-8...From "Natural Perfection, Longchenpa's Radical Dzogchen" ....Translation and Commentary by Keith Dowman...Published in 2010 (Wisdom Publications Boston))

"Machig Labdrön is often depicted with the attributes of a dakini, a representation of enlightened female energy. .....

"The four stages of enlightenment in Buddhism are the four progressive stages culminating in full enlightenment as an Arahat.....1.Sotapanna [ (Pali; Sanskrit: Srotāpanna), literally meaning "one who enters (āpadyate) the stream (sotas)]... 2.Sakadagami [ (Sanskrit: Sakṛdāgāmin), literally meaning "one who once (sakṛt) comes (āgacchati)". The once-returner will at most return to the human world one more time. ]..... 3. Anagami [(Sanskrit: Anāgāmin), literally meaning "one who does not (an-) come (āgacchati)". The non-returner, having overcome sensuality, does not return to human world, or any unfortunate world lower than that after death.]......and 4. Arahat [Arahant, a fully awakened person. He has abandoned all ten fetters and, upon death (Sanskrit: Parinirvāṇa, Pāli: Parinibbāna) will never be reborn in any plane or world, having wholly escaped saṃsāra ].".....http://en.wikipedia.org/wiki/Four_stages_of_enlightenment

"We must allow ourselves to be disappointed, which means the surrendering of me-ness, my achievement. We would like to watch ourselves attain enlightenment, watch our disciples celebrating, worshipping, throwing flowers at us, with miracles and earthquakes occurring and gods and angels singing and so forth. This never happens. The attainment of enlightenment from ego’s point of view is extreme death, the death of self, the death of me and mine, the death of the watcher. It is the ultimate and final disappointment. Treading the spiritual path is painful. It is a constant unmasking, peeling off layer after layer of masks. It involves insult after insult.".....from The Myth of Freedom and the Way of Meditation, by Chögyam Trungpa. (Boston: Shambhala Publications, 1976.)

"So the most difficult thing is always to keep your beginner's mind. There is no need to have a deep understanding of Zen. Even though you read much Zen literature, you must read each sentence with a fresh mind. You should not say, "I know what Zen is," or "I have attained enlightenment." This is also the real secret of the arts: always be a beginner. Be very very careful about this point. If you start to practice zazen, you will begin to appreciate your beginner's mind. It is the secret of Zen practice.".....Shunryu Suzuki-roshi (1905 - 1971) Zen Mind, Beginner's Mind

"Rumi has also contributed one special device. He became enlightened not by sitting silently like a Buddha, he became enlightened by dancing. For thirty-six hours he danced and danced. The dancer disappeared in the dance, there was only dance and no dancer — the ego died."....."“Dance, when you're broken open. Dance, if you've torn the bandage off. Dance in the middle of the fighting. Dance in your blood. Dance when you're perfectly free.”....http://en.wikipedia.org/wiki/Rumi

"Shambhala: The Sacred Path of the Warrior and Great Eastern Sun: The Wisdom of Shambhala —explore the vision of an ancient legendary kingdom in Central Asia that is viewed as a model for enlightened society and as the ground of wakefulness and sanity that exists as a potential within every human being."....The Collected Works of Chogyam Trungpa

"The famous Buddhistic traveller Alexandra David-Neel writes in 'Les Nouvelles Littéraires', 1954, p.1 that Shambhala - is to be found at Afghanistan - near or at the city of Balkh.