"The Kalachakra tantra puts the life of Shakyamuni Buddha in the 9th. Century BCE, instead of the more commonly accepted 6th. Century BCE. There is also some discussion on when Shakyamuni Buddha taught the Kalachakra during his life time. Because of specific time indications in the teachings, it could have been one year after he attained enlightenment, but others say it was one year before he passed away. According to His Holiness the 14th Dalai Lama, logic indicates that it must have been at the end of his life, because the Kalachakra tantra reflects so many of his lifelong accomplishments.".....http://kalachakranet.org/kalachakra_tantra_history.html 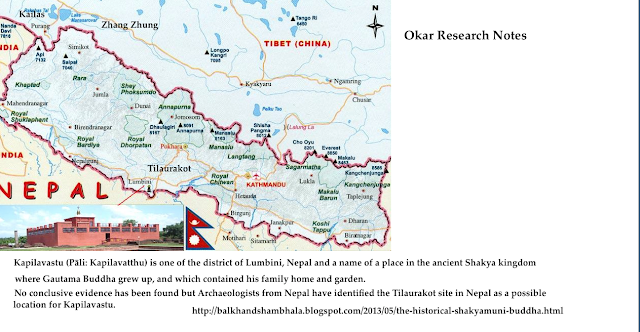 "The Kingdom of Koshala in the Shakhya clan...Kosala (Sanskrit: कोसल) was an ancient Indian region, in present day Uttar Pradesh. According to the Buddhist text Anguttara Nikaya and the Jaina text, the Bhagavati Sutra, Kosala was one of the Solasa (sixteen) Mahajanapadas (powerful realms) in 6th century BCE and its cultural and political strength earned it the status of great power. ...Shravasti was the capital of Kosala between 6th century BCE and 6th century CE......A Buddhist text, the Majjhima Nikaya mentions Buddha as a Kosalan.... 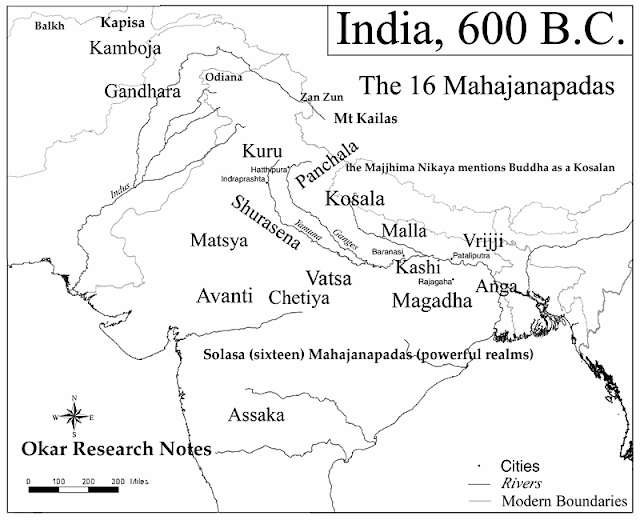 Suchandra (Tib. Dawa Sangpo) c. 900 to 876 BC. Note: the Kalachakra calculations put the life of Shakyamuni Buddha quite a bit earlier than is generally accepted.....http://en.wikipedia.org/wiki/Kings_of_Shambhala

Shakyamuni Buddha (Shakya thub-pa), also known as Gautama Buddha (Gau-ta-ma), lived from about 560 to 485 BCE.... A native of the ancient Shakya republic in the Himalayan foothills,he taught primarily in northeastern India.....was born into a wealthy warrior class family in the state of Shakya, with its capital at Kapilavastu (Ser-skya’i gnas), present-day Lumbini, Nepal.....father was Shuddhodana (Zas gtsang-ma) either a hereditary monarch, the descendant of the Solar Dynasty of Ikṣvāku (Pāli: Okkāka), ( Suryavansh/Solar Dynasty of Kshatriyas in Vedic civilization in ancient India.) or the elected chief of a tribal confederacy........mother, Maya-devi (Lha-mo sGyu-‘ phrul-ma) a Koliyan princess.....wife, Yashodhara (Grags ‘ dzin-ma).... a wandering mendicant spiritual seeker .....After living a very privileged life, n 530 BC he went to Rajagaha and began his ascetic life by begging for alms in the street.......In 525 BC, he was seated under a pipal tree—now known as the Bodhi tree—in Bodh Gaya, India, when he vowed never to arise until he had found the truth. After a reputed 49 days of meditation, at the age of 35, he is said to have attained Enlightenment.....After his awakening, the Buddha met two merchants from Balkh, Afghanistan, named Tapussa and Bhallika, who became his first lay disciples......For the remaining 45 years of his life, he traveled in the Gangetic Plain, in what is now Uttar Pradesh, Bihar and southern Nepal, teaching a diverse range of people: from nobles to outcaste street sweepers, murderers such as Angulimala, and cannibals such as Alavaka. From the outset, Buddhism was equally open to all races and classes, and had no caste structure..... at the age of 80, the Buddha announced that he would soon reach Parinirvana, or the final deathless state, and abandon his earthly body. After this, the Buddha ate his last meal, which he had received as an offering from a blacksmith named Cunda......he died in Kushinagar (present-day in Uttar Pradesh, India)...At his death, the Buddha is famously believed to have told his disciples to follow no leader....."

(The fakir, or faqir ....Hindu and Buddhist ascetics are often called a fakir by historians)... .....The Shramana (Skt. Śramaṇa; Pāli. samaṇa) was an ancient Indian religious movement, parallel to, but separate from, Vedic Hinduism. The Shramana tradition gave rise to Jainism, Buddhism, and Yoga, and was responsible for the related concepts of saṃsāra (the cycle of birth and death) and moksha (liberation from that cycle)......The Pāli samaṇa and the Sanskrit Śramaṇa refer to renunciate ascetic traditions from the middle of the 1st millennium BCE. They were individual, experiential and free-form traditions, independent of society; and in religious competition with Brahmin priests, who as opposed to Shramanas, stressed mastery of texts and performing rituals..... It was as a Shramana that the Buddha left his father's palace and practised austerities. The Brahmajāla Sutta mentions many śramaṇas with whom Buddha disagreed"....http://en.wikipedia.org/wiki/Shramana

Physical Characteristics & Depictions......."A disciple named Vakkali, who later became an arahant, was so obsessed by Buddha's physical presence that the Buddha is said to have felt impelled to tell him to desist, and to have reminded him that he should know the Buddha through the Dhamma and not through physical appearances."...."....among the 32 main characteristics it is mentioned that Buddha has blue eyes.".....(Epstein, Ronald. Buddhist Text Translation Society's Buddhism A to Z. 2003. p. 200).....the good Gotama's senses are calmed, his complexion is clear and radiant......

Idoltry......"The Buddha is not God or even one among many gods. During his lifetime of 80 years, Buddha Sakyamuni only allowed his image to be recorded as a reflection in rippling water. Images of the Buddha himself did not appear for at least 400 years after his death and even then were created only to remind followers of their own innate "Buddha Nature." This kind of early aversion to "idolatry" is typical of early Buddhism."....W.L. Rathje, Discover Archaeology Magazine

"Greek Hellenistic free-standing Buddhas, "the most beautiful, and probably the most ancient of the Buddhas", assigning them to the 1st century BCE, and making them the starting point of the anthropomorphic representations of the Buddha ("The Buddhist art of Gandhara", Marshall, p101)....Sometime between the 2nd century BCE and the 1st century CE, the first anthropomorphic representations of the Buddha were developed. These were absent from earlier strata of Buddhist art, which preferred to represent the Buddha with symbols such as the stupa, the Bodhi tree, the empty seat, the wheel, or the footprints. But the innovative anthropomorphic Buddha image immediately reached a very high level of sculptural sophistication, naturally inspired by the sculptural styles of Hellenistic Greece."...http://en.wikipedia.org/wiki/Standing_Buddha

Balkh and Sakyamuni....."Buddhism was introduced in Balkh by Bhallika, first disciple of the Buddha.....First Vihara at Balkh was built for Bhallika when he returned home after becoming a Buddhist monk....Trapusa and Bahalika from Balkh in Afghanistan, are attributed to be the first two lay disciples of the Buddha..... the first account of Trapusa and Bahalika appears in the vinaya section of the Tripiṭaka where they offer the Buddha his first meal after his enlightment, take refuge in the Buddha and Dharma, ( the Sangha still not having been formed) and become the Buddha's first lay disciples."....en.wikipedia.org/wiki/Balkh‎

500 BC...Central Asia......
Helino IV (Helenus), King of Cimmerians....525 B.C. Caucasus, Central Asia
Cyrus (580-529 BC) was the first Achaemenid Emperor. He founded Persia by uniting the two original Iranian Tribes- the Medes and the Persians.
Afghanistan was inhabited by the Aryan tribes and controlled by the Medes until about 500 BC when Darius the Great (Darius I) marched with his Persian army to make it part of the Achaemenid Empire.
Arachosia is the Hellenized name of an ancient satrapy in the eastern part of the Achaemenid, Seleucid, Parthian, Greco-Bactrian, and Indo-Scythian empires.....Following the Partition of Babylon, the region became part of the Seleucid Empire, which traded it to the Mauryan Empire in 305 BCE as part of an alliance.
520 BC - Persian armies under Darius I conquer much of Central Asia (inc. Ferghana, Sogdiana, and Chorasmia).... Cyrus' successor Darius I, apparently annexed Chorasmia, Transoxiana, and Bactria before 500 BC and organized them into satrapies. Persian control lasted (with brief interruptions) for nearly 200 years.
Achaemenid Rule, ca. 550-331 B.C......The area that is present-day Afghanistan comprised several satrapies (provinces) of the Achaemenid Empire when it was at its most extensive, under Darius the Great (ca. 500 B.C.). Bactriana, with its capital at Bactria (which later became Balkh), was reputedly the home of Zoroaster, who founded the religion that bears his name.


"Shakyamuni Buddha is said to have taught the Kalachakra tantra on request of King Suchandra of Shambhala...Along with King Suchandra, 96 Satraps and emissaries from Shambhala are also said to have received the Kalachakra teachings....The first notable king of Shambhala, King Suchandra (sometimes wrongly Sanskritized as "Chandrabhadra," Tib. Dawa Sangpo), was the one who requested teaching from the Buddha. In response to his request, the Buddha gave the first Kalachakra root tantra. By practicing the Kalachakra the whole of Shambhala became an enlightened society, with Suchandra as the ruler. ....Surrounding the King are his ministers, generals, bodyguards, elephants and their trainers, and warriors. His main queen is the daughter of one of the ninety-six satraps of Shambhala. He has many other queens besides and many sons and daughters. "...http://www.shambhala.mn/Shambhala-Thangka/shambhala-thangka.html

"Sakiya Sinha, or Sakiya Muni, or Sramana Gautama....Gautama was known by the title of Sakiya Sinha-- Lion of the Sakiya tribe...Shakya (Sanskrit: Śākya, Devanagari: शाक्य, Pāli: Sākiya, Sakka, Saka, or Sakya) was an ancient people of the Indian Subcontinent in the 1st millennium BCE..... Shakya (the Buddha's tribe) were Indo-Aryan (since the Shakya were Kshatriya).... The separation of Indo-Aryans proper from Indo-Iranians is commonly dated, on linguistic grounds, to roughly 1800 BCE....Archaeologist J.P. Mallory (1998) derives the Indo-Aryans from the intermediate stage of the Bactria–Margiana Archaeological Complex (BMAC) culture....Bernard Sergent identifies this Bronze Age culture of Bactria, one of the most brilliant civilizations of Asia....Bahlika/Balkh, a town in northern Afghanistan or Bactria. It tallies with the list of regions in the opening chapter of the Vendidad, corresponding to Bactria, Sogdia, Margiana, southern Afghanistan and northwestern India, which happens to put Balkh practically in the geographical centre."....http://www.bharatvani.org/books/ait/ch53.htm


"Another class of Buddhas are the four Adi-Buddhas, Vairocana (one of the Five Tathagatas), Vajrasattvu (he Whose Nature is the Absolute), Vajradhara (Holder of the vajra), and Samantabhadra. Vairocana was regarded as a primordial Buddha around 800 B.C. it is assumed that this phenomenon arose due to inspiration driving from Islamic monotheism. The concept of an Adi-Buddhas is to be found already in earlier texts, but the belief in a primordial Buddha became widespread only around 800 B.C. Although all of the Adi-Buddhas represent the Absolute, they have different characteristics. Thus, Vajrasattva is translated as He Whose nature is the Absolute.".....http://www.ladakh-tourism.net/Tibetan_Buddhism_Iconography.htm

Central Asia in 800 - 500 BC...
Cyrus II of Persia (Old Persian: Kūruš; New Persian: کوروش بزرگ c. 600 BC or 576 BC–530 BC
Darius I (Old Persian: Dārayava(h)uš; 550–486 BCE) was the third king of the Persian Achaemenid Empire. Also called Darius the Great, he ruled the empire at its peak, when it included much of West Asia, the Caucasus, Central Asia
A satrap was a provincial governor or regional King during ancient Persian imperial times....Satraps ruled the various provinces of Persia from the age of the Median Empire, 728 to 559 BCE, through the Buyid Dynasty, 934 to 1062 CE.
A group called the Medusa, or Madder, Medes.... first appeared in conjecture with the Persians in the early 8th century BC. It was the medes who are commonly believed to have the set the beginnings of the Persian Empire in motion. By 735 BC, at the latest, they seem to have settled into a capital, Zakrati, and were beginning to form a kingdom. The first ruler of the Medes, as reported by Herodotus was Deikes in about 700 BC. He came to power slowly, when the Medes were still village dwellers. he stayed in his fortress for most of his fifty-five year reign.