"Anahita is sometimes depicted as riding a tiger (like Durga!) or lion. In the plate below, she is depicted sitting on a lion and holding the sun in her hand. ”In ancient Iranian religion of Mithraism, lion was connected to the sun and to fire and was perceived as a moral cleansing and purifying force, and it was the Sun God Mithra’s “totem” animal. It is difficult to get precise historical data, but the oldest surviving Lion and Sun emblem in early form, date back to the reign of King Artaxerxes II (436-358 BCE). The Achaemenid seal depicting king Artaxerxes (a Mithraist), honouring Goddess Anahita who is riding on a lion and sun is rising from the lion’s back.” (http://www.cais-soas.com/News/2006/December2006/30-12.htm). 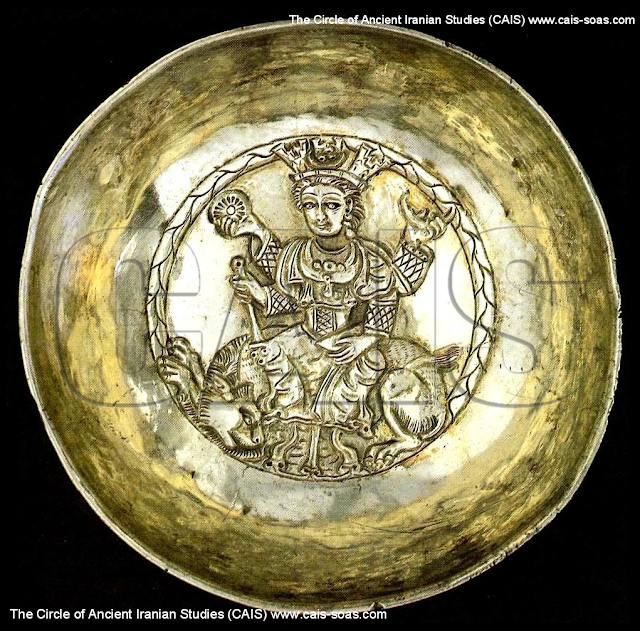 "The best-known symbol of Iran has been the lion and sun motif, which has a long history in Iranian civilisation. The sun rising over the back of the lion or, astrologically, in back of the lion, has always been considered symbolic of power and kingship in Ianian culture. It is difficult to get precise historical data, but the oldest surviving Lion and Sun emblem in its' early form, date back to the reign of King Artaxerxes II (436-358 BCE). The Achaemenid seal depicting king Artaxerxes (a Mithraist), honouring Goddess Anahita who is riding on a lion and sun is rising from the lion's back."....http://www.cais-soas.com/News/2006/December2006/30-12.htm 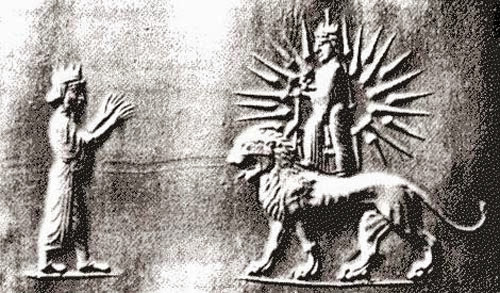 "In The Myth of Freedom the late Chögyam Trungpa Rinpoche has a beautiful description of emotions. He says: “The emotions are composed of energy, which can be likened to water, and a dualistic thought process, which could be likened to pigment or paint. When energy and thought are mixed together they become the vivid and colorful emotions. Concept gives the energy a particular location, a sense of relationship, which makes the emotions vivid and strong. Fundamentally, the reason why emotions are discomforting, painful, frustrating is because our relationship to the emotions is not quite clear.”.....Trungpa, Chogyam, The Myth of Freedom and the Way of Meditation, p. 64

"The period between 26th and 20th century BC was the most important period in the history of Balkh.... Its foundation is mythically ascribed to Keyumars, the first king of the world in Persian legend ; and it is at least certain that, at a very early date, it was the rival of Ecbatana, Nineveh and Babylon. There is a long-standing tradition that an ancient shrine of Anahita was to be found here, a temple so rich it invited plunder.".....http://en.wikipedia.org/wiki/Balkh

"There is reference to Mithra as being born of "Anahita, the Immaculate Virgin Mother of the Lord Mithras". Anahita was said to have conceived the Mithras from the seed of Zarathustra preserved in the waters of Lake Hamun in the Persian province of Sistan. In other, contradictory traditions, he is also born without any sex but from the rock wall of a cave. One must know that there were separate Mithra traditions that may have changed and been adapted over time. This information comes from a Temple that bears this inscription dedicated to Anahita and dated to about 200 B.C.E.......http://archi-west.tripod.com/anahita.htm 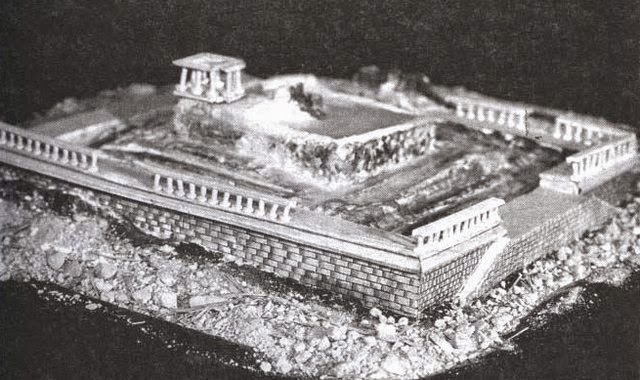 "Anahita Temple in Kangavar.......Kangavar is a small town of great antiquity lying halfway between Hamedan and Kermanshah. In about 200 B.C., during the Seleucid Greek occupation of Kangavar, a major sanctuary was erected to the mother goddess Anahita – who was worshipped in ancient Persia along with Ahoora Mazda and Mithras. This vast temple was built of enormous blocks of dressed stone with an imposing entrance of opposed staircases which may have been inspired by the Apadana at Persepolis.....Anahita Temple in Kangavar City (Kermanshah Province) is one of the greatest stone buildings, from architectural perspective. Anahita is the name of the goddess of the planet Venus, who seems to have been worshipped by the Medes and Persians before they adopted Zoroastrianism......One of the early references to such temple is by Isidore of Charax who reports that in Parthian territory, Ecbatana, the greatest metropolis of Media, retained a temple of Anahita where sacrifices were regularly offered. At Concobar (Kangavar) in lower Media, a temple of "Artemis" built about 200 B.C., was standing when Isidore of Charax (100 AD) wrote, and some vestiges of this Greek-style edifice survive today......Among very few carvings of Anahita, one can refer to a rock carving at Naqsh-e Rostam where the king Naresh (A.D. 290-303) is shown receiving investiture from the hands of Anahita, who wears a serrated crown and a sleeveless cloak.".....http://archi-west.tripod.com/anahita.htm 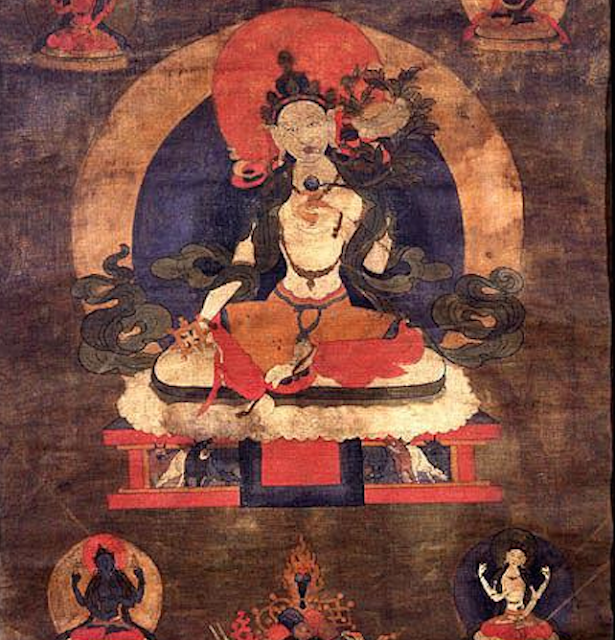 "The Bon deity, Sherab Chamma, also called "Thugje Chamma" in Tibetan or the Loving Mother of Compassion is considered to be the mother of all buddhas … she represents the “perfection of wisdom” … in Tazig language, Sherab Chamma was known as the ancient Iranian (Aryan) goddess Anahita … Tazig Language is "New Persian" post-9th c. as designated by Iranian Sogdians in Central Asia (in comparison to Middle Persian or Pahlavi spoken pre-9th c. and first brutal Islamic invasion of Iran – the second devastating invasion was in 1979)…… Sherab Chamma (Anahita) holds a gold swastika (Indo-European & Aryan symbol for wheel of life ... not to be confused with modern Western propaganda under one of its political destructive forms called Nazism) and a golden vase along with a lotus (fleur-de-lis as seen among ancient Iranian symbols since beginning of history) … Sherab Chamma (Anahita) is a meditational divinity and a protector … she roots out “the three poisons of greed, anger and delusion” (Aryan beliefs were based on shedding negativity or falsehoods or lies – that is, in abstract format, and not imagined angels & demons as interpreted and adopted later by Semitic views in the Judeo-Christian-Islamic trilogy) … flames of fire representing wisdom surround the goddess (hence, ancient Iranians revered fire as a tool in seeing the Truth … they were not fire-worshipers as often misrepresented again by the Semitic point of view to a point that even some modern Iranians converted to a Semitic belief generations ago think their ancestors worshiped the element of fire!!!)… "....The Official Site of Sheda Vasseghi May 5, 2013 ·